Hey, I heard you were a wild one. Oooooh.

Share All sharing options for: Remember This Guy: Vernon Maxwell

I played some quizzo last week with Mike and Tanner. Now, apparently, Mike's too good for the East Coast. He views our Philadelphian quirks and appreciation for Miller High Life tall boys with a Left Coast disdain.

I learned that Mike started drinking scotch, Tanner recently bought a motorcycle, and I'm currently waist-high in a khakis phase. Things have changed. And amidst a lengthy discussion about Delmon Young and tales of romance on the west coast, I was asked to write about Vernon Maxwell. Tanner, the Teller to Mike's Penn, nodded in agreement.

"I need at least three months," I told them.

You have until Memorial Day.

"Nobody likes a dictator."

How can you give me just a couple of days? It's like asking David McCullough to cover John Adams' life in just fifty pages. Vernon, like the 2nd President of the United States, deserves so much more. I wasn't offended by Mike's deadline as a writer, but as a Maxwell fan.

So here goes nothing.

"Don't sleep on the Sixers this season, Ed."

Legend has it that Vernon Maxwell pulled up for a jumper as soon he touched down at Philly International Airport back in ‘95. The fact that his shot rolled meekly down I-95 was beside the point. Maxwell played with an admirable and blatant disregard for shot selection and efficiency. He was a cavalier - not in the Cleveland sense - but in the vigilant sense. Shoot first; ask questions later, Mad Max.

Vern made you a believer. A dreamer. Area boys and girls from as far north as Easton could be seen practicing off-balance 18 footers on their driveways and Nerf nets.

My 11 year old self shot fadeaways in the kitchen while mother searched on the spice rack for the paprika. It was a tricky shot, sure, and certainly inefficient. The low ceiling and the unforgiving Nerf rim only compounded its difficulty. Should I have worked the shot clock, perhaps tried to get something moving towards the living room?

Maybe. But in 1995, the only thing I needed was a chip and a jump shot. Just like my Uncle Vern taught me.

Mad Max captured the imagination of this city. Six years old Mike Levin infamously wrote him a letter ; a letter in which he adorably asked for Mookie Blaylock's head on a stick. And while the request from Little Levin was a bit dark, violent even; you knew you could count on Vernon to give it the ‘ol college try. 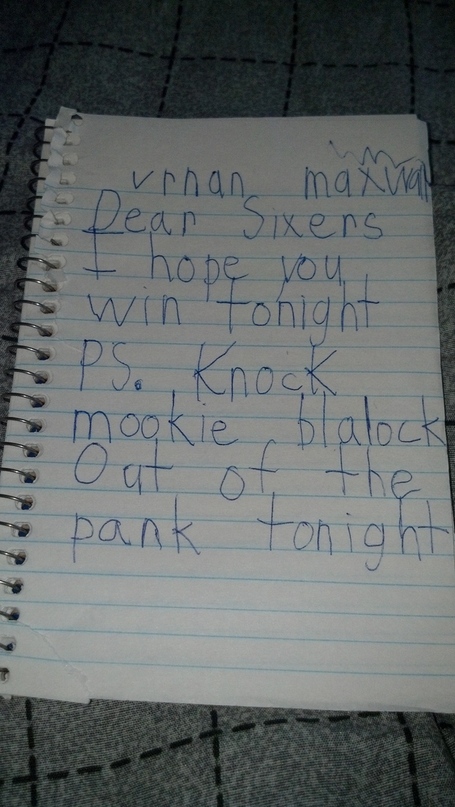 I was scared when Vernon Maxwell was on my team. But I was even more terrified of playing against him. He earned the reputation of being a loose cannon, a ticking time bomb, or any other explosive used to describe the late Brian Pillman. His Wikipedia page includes a section entitled, "Behavioral Incidents," which has recently omitted the alleged rumor of Maxwell knowingly giving a woman herpes. (Along with Chase Utley's Baseball-Reference page, I have Vernon Maxwell's wiki article saved under My Favorites. It's really not a big deal).

Vernon joined John Lucas and the Sixers for the '95-'96 season. It was poorly constructed roster, an island of misfit toys that had as much chemistry as a Roger Lodge-narrated blind date.

By spring, the Sixers were buried in the Eastern Conference's mother's basement. Lucas ran the offense through ‘Spoon, Maxwell and Rex Walters, since Jerry Stackhouse was properly locked in the closet of a Hampton Inn. Each contested nineteen footer was one small step for Rex's confidence, and one giant leap for the Tanking MovementTM. With our sacrifice to Lucy complete, Sixers fans turned their sights towards the draft, the '96 Summer Olympics, WCW's Bash at the Beach.

Watch out for this Dominique Moceanu. Kid has electric stuff on the floor exercise.

"No argument here, Ed. And speaking of young cruiserweights, what about that Dean Malenko? Sure knows a lot of holds."

Vernon Maxwell played out the string for us. While we were busy discussing the intentions of The Outsiders and slapping the Texas Cloverleaf on our younger siblings, Mad Max had gone rogue. Without the supervision from us Sixers fans (attendance was sparse in those years), Maxwell compiled a string of mind-bogglingly incredible and selfish performances. We were powerless to stop him. Derrick Alston, too, was powerless to stop him.

The Sixers were playing New Jersey on a damp and unseasonably warm April night. Mad Max lit up the Nets to the tune of 41 points on 17-33 shooting. Vernon shot 17 threes, and recorded just one assist. That's a 17:1 three pointers attempted to assist ratio. Even Roy, LB's own Roy Burton, has played games of NBA Jam that have featured a more balanced scoring attack.

The next shot was always his best shot.