In this edition of the Sunday Morning Shootaround, we catch up with a long-lost former Sixer, discuss overrated breakfast establishments, and wonder whether Evan Turner has the CARFAX for the Pontiac that he's trying to sell.

The house function this weekend bout to turn up. Got my bros coming up to the bay. Yall have fun in Vegas n miami doe. #imcool

Dorell Wright Translated: There is an affair on tap for Memorial Day Weekend that is sure to rival the legendary parties hosted by the great Jay Gatsby! Several of my compatriots who will be accompanying me to said engagement are currently en route to the San Francisco/Oakland area. For those of you who are taking your talents to Sin City and Miami, I sincerely hope that you enjoy your vacation. Huzzah!

The biggest of all hat tips goes out to Sports Illustrated's Bryan Armen Graham who pointed out that PEPE SANCHEZ HOSTS A BASKETBALL SHOW ON DIRECTV. TURN. UP.

For those who are unaware, Sanchez (who didn't even have a grande-sized cup of coffee with the Sixers back in 2000-01) is the greatest point guard in the modern era of Temple University Basketball. Sanchez has the third-most steals in NCAA history (365), and he made the All-American team as a senior, even though he scored just 5.6 points per game and shot just 32.4 percent from the field that season. (I love John Chaney, but sometimes, his offenses were UGLY.)

While his game didn't translate well into the NBA (slow point guards who can't shoot are at a distinct disadvantage in the Association), Sanchez had a decent career overseas, and was a vital part of Argentina's 2004 Olympic Team that knocked off A.I., LeBron, 'Melo and company en route to the gold medal.

Seeing this picture for the first time was like Christmas in May. Or, to put it another way, it's how Tanner Steidel would feel if he ever had the chance to walk into Swaggy P's shoe closet.

There's nothing better on a lazy morning than a good ol', country-style breakfast. But truth be told, Cracker Barrel is terrible. Not Denny's terrible, but pretty bad just the same.

Aside from the sawmill gravy (which pales in comparison to the sausage gravy at Bob Evans), there really is no point to going to Cracker Barrel. The best part about the restaurant is that tabletop game that you play with the golf tees, and you can buy that for $2.99 online if your spirit moves you.

The folks over at SBNation's CFB Recruiting site had a Friday morning roundtable discussion about the best breakfast spots, and Bojangles appeared to be the unofficial winner. I've never been, so I can't personally vouch for the place, but they get bonus points for their new ad campaign featuring American Idol Season 10 winner Scotty McCreery.

For those of you who don't live in a red state, here are the full lyrics to McCreery's "Bojangles' Town":

Friday night football is king, sweet tea goes good with anything
And the girls come out when the sun goes down
Nobody eats 'til you say Amen, and everybody knows your mom and 'nem
You can see who loves who from miles around, in a Bojangles' town

I'm not sure about the whole "girls come out when the sun goes down" line (Are these women vampires? Where is Sookie Stackhouse when you need her?), but in a world where there are very few jingles in commercials anymore, Bojangles' song is BOSS. Oh... and their menu looks pretty good, too.

Anybody trying to buy a Pontiac Grand Prix for 6k?

It's not often that you see a professional athlete selling a 2007 Pontiac on Twitter. I hope everything is OK with Turner - I doubt he needs the money, but it's an odd posting, nonetheless.

NOW I get it. Turner doesn't want to deal with the hassle of shipping the Pontiac across country if/when he gets dealt, so he's willing to sell it on the Twitter. It all makes sense now.

It's funny: His initial tweet was almost perfect - I hope the rest of his teammates were busy shooting in the gym during the lottery as well - but then Turner Sixer'd the follow-up by basically agreeing with a fan who said that the small forward needs a fresh start somewhere else.

Turner later tweeted that he wanted to stay in Philly, but that felt as genuine as Toronto Mayor Rob Ford's statement that he doesn't smoke crack cocaine.

* Relaxes in chair, grabs sweet tea, waits for the onslaught of "should of drafted Paul George" tweets* 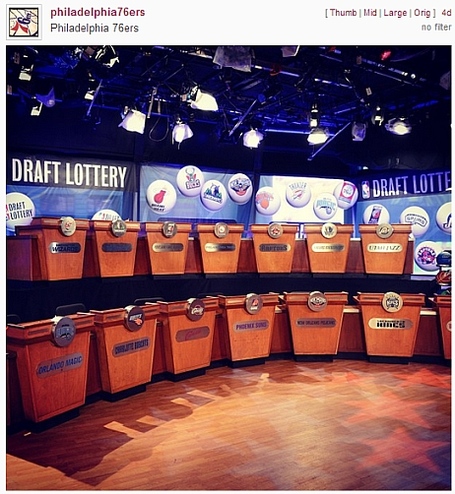 As Mike Levin wrote last week, "The NBA Draft Lottery Extravaganza is one of the more ridiculous televised events in the world." Even so, it's always fun to see young players like Bradley Beal make awkward attempts at conversation with guys like Lon Babby.

The 76ers were in the house last Tuesday, and the picture from the draft lottery that was posted on the team's Instagram account sparked a number of interesting reactions:

andri0tis We secured that we will suck another season

ericmullin25 I guarantee next year we get the 12th pick #mediocracyatitsfinest

relentlessassassin All we need is a big man that runs the floor.. drew Thad & turner will step there games up.. trust!!!

tc0n Huge sixer fan, but if only we drafted @boogiecousins our team would be completely different and prolly still have Doug Collins because he would put dcuz in check. Contact me if u need a gm