Will Sam Hinkie's Sixers Tank for Andrew Wiggins in 2014?

The Sixers have been mediocre for years, and fans like us have asked the team to tank for better draft position. With a seemingly loaded 2014 draft on deck, I wonder if the Sixers will tank next season.

Share All sharing options for: Will Sam Hinkie's Sixers Tank for Andrew Wiggins in 2014?

Doug Collins's resignation and Rod Thorn's retirement led to the hiring of a new general manager, one that we all hope takes the Sixers out of an era of Mediocracy - one where the team had a low ceiling and a maddening disregard for how the NBA generally works. With Sam Hinkie now here, a newer roster-building and forming philosophy has been adopted. However, one thing we've advocated that the Sixers do for years was tank and hope for some lottery luck.

But Hinkie's old team hasn't exactly embraced that philosophy either. Houston finished within 2 games of .500 in 3 of the previous 4 years. Instead, Houston spent those years trying to gather assets to trade for a superstar. They ultimately succeeded. But Sam Hinkie isn't Daryl Morey, and the Sixers aren't the Rockets, and there's a chance Hinkie might have to adopt a different rebuilding method, maybe even one that involves tanking.

During his introductory press conference, in between the questions about the nature of NBA analytics asked mostly by mainstream media members, Hinkie was asked questions about what he would do to build a team, questions that really get to his plans. Luckily for me, Derek Bodner summed up Hinkie's comments so well in his article about Hinkie and explaining analytics that I can use them as an outline:

Hinkie was asked specifically about taking a step backward in order to get the assets he needed to build a contender.

"I start with an end in mind. In everything. And I'll encourage our staff to do the same," Hinkie explained. "The mantra here has been very clear, which is to compete for championships. History, for the most part, especially recently, especially in the current environment, with the current rules and the current collective bargaining agreement, history has been reasonably clear that superstar players matter."

There's so much to like about this quote. One, Josh Harris is the man. He wants to win championships. Winning games is not the goal for the owner. It may have been under Comcast-Spectacor, which held the Sixers as a co-tenant for the Flyers. But not anymore. GMs and coaches won't be evaluated simply by win totals, or whether or not they could attract a crowd of a reasonable size. They won't be prone to coaches and general managers whose sole purpose is to keep their cushy jobs. Josh Harris wants to win a title, and he thinks Hinkie can get that job done. 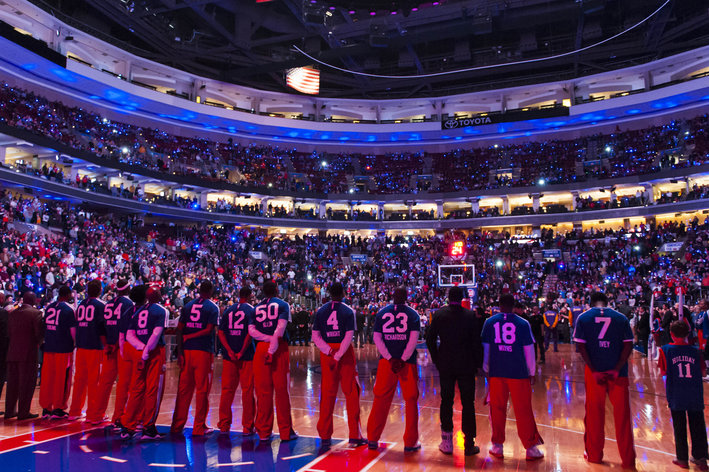 Two, Hinkie wants to obtain superstar talent. You could find an old school basketball mind who will tell you the same thing. However, the Sixers now have a general manager well-versed in making moves which ultimately have the end game of obtaining superstars and winning titles. There's a clear goal here in Philadelphia now: something you couldn't say when Rod Thorn ran the show.

The question that this goal brings up is, well, how do the Sixers get their superstar to achieve their goals? More from Derek's article:

The focus on the draft wasn't just to trade for a superstar, though, but also to accumulate assets which can be used in a trade to acquire a superstar.

"We talk about trading for some superstar, often that's a function of drafting well in the past and being able to use those pieces to trade for a superstar," Hinkie said.

When the Rockets hired Sam Hinkie for a front office position in 2007, they actually had 2 superstars: Yao Ming and Tracy McGrady, stars who could lead the team to 50+ win seasons and to championship contention with a bit of luck. But that didn't last long. Injuries led to Yao Ming's retirement* and Tracy McGrady's decline and eventual salary dumping trade, forcing the Rockets to find new superstars.

*Yao's retirement after major foot issues could be a mitigating factor in any Bynum decision made by Hinkie, as he has experience with bigs and chronic injuries.

They started with acquiring the hyper-efficient Kevin Martin in the McGrady deal, which looked like a steal - Martin was one of the most efficient offensive players in the game and combined that efficiency with high volume at the time. Houston also made a number of trades, big and small, all considered by astute NBA observers to be minor victories for the Rockets but none considered franchise-changing. These include, but are not limited to, the following: acquiring Kyle Lowry for an aging Rafer Alston, developing him into a near all-star point guard, and shipping him off to Toronto for a guaranteed lottery pick; trading volume-aided MIP Aaron Brooks to the Suns for Goran Dragic and a first round pick; and acquiring Luis Scola in a trade with the Spurs (who, at the time, couldn't accommodate his coming over to America). Finally, they had success with drafting contributors like Chase Budinger, Carl Landry, and Chandler Parsons in the second round. Moves like these gave Houston the assets to make a big move when the conditions were right. The pick from the Lowry deal and Kevin Martin were included in the James Harden trade.

With all that said, should we expect for the 76ers to sit on their hands, save up their cap space for next offseason, get the best draft pick possible and try to pounce in free agency with their cap space?

"If you were to go down that path [of saving cap space for next year] you'd have to believe you could put yourself in a position to be competitive [in convincing players to come to Philly]," Hinkie said. "And if you could, I wouldn't disagree with it that it is a reasonable set of choices [to go that route], but that is by no means the favorite coming out of the barn, at all."

The Rockets haven't had much success in wooing free agents. Needing a superstar center to pair originally with Kevin Martin, the Rockets cleared enough cap space to woo Chris Bosh during the summer of 2010 and nearly pulled off a trade for Pau Gasol to pair with him, but ultimately neither deal was finalized. Once injuries and a much-needed change to the rip-through move foul call derailed Martin's career, the Rockets found themselves again superstar-less. Ultimately, it took three years of mediocrity and heavy turnover to get James Harden, and they still have a lot of improvements to make to be considered as title contenders. Getting a free agent superstar to sign in Houston should be easier to accomplish with one already in hand, however.

If anything, Houston is a more desirable market than Philadelphia. While Philadelphia has a bigger metropolitan population, it can't compete with perks like nice winter weather and no state income taxes. Finding free agents that want to come here would likely require us finding a superstar via another method first. As he said, it doesn't seem likely to pull a Miami and empty the cap space for multiple superstars.

Now that the option of hoarding cap space to sign free agents seems to have been eliminated by Hinkie himself, there's only two other ways to really obtain a superstar: via trade or draft. Which brings us to the question at hand: would Hinkie tank to get a superstar in the draft?

If you were looking for a conclusive answer, I have to apologize. There's no way of knowing for sure. However, assuming he wouldn't based on his Rockets history, like I have before, is foolish. As I mentioned above, Sam Hinkie is not Daryl Morey - there's a saying that not all GM Excel Spreadsheets come from the same notebook*. Second, the situation here is markedly different than that in Houston a few years back. Teams are generally smarter now than they were even 2 or 3 years ago, as analytically-minded front offices should provide for tougher competition. Fleecing teams, say, for Dragic and a 1st should happen much less often going forward, especially now that our former front office isn't around to make stupid decisions. And that Rockets team had more assets to work with than we do at the moment.

*yes, that's an Excel joke, and no, I am not apologizing

The last point before the footnote I think is the most important. Decision-makers make different decisions based on the information and assets they have at hand. The Rockets had draft picks and money and what they perceived as a competitive advantage data-wise over their competition after the Ming Dynasty crumbled. The Sixers don't have much in terms of draft picks - unless they trade this year's pick after making their selection, they can't trade one without getting a pick in return before the 2018 season - or contracts that would appeal to other teams. If they finish outside the lottery, they'll lose their next first rounder in one of the next two years. Most of their contracts on the books expire after this coming season. The Sixers don't have max cap room this year or a superstar for someone to consider playing with already on the roster. It will be nearly impossible for Hinkie and company to gain advantage and create assets for trades and remain mediocre when he starts from such a shoddy position in the first place.

I START WITH AN END IN MIND. THE MANTRA HERE IS TO COMPETE FOR CHAMPIONSHIPS. -Sam Hinkie.

In my estimation, based on Hinkie and Harris's stated goal, the Sixers will either re-sign Bynum, or they will be worse than mediocre. Those are the only two options which make sense to me, based on his goals. Signing Bynum means they'll take the plunge and hope he is the superstar they need. Tanking gives them more assets to use in trades, since they'll get the picks they're currently slated to lose, and hopefully develop them into superstars or use the picks to obtain one.

Hinkie knows his task, and he needs to find a superstar that he can build a team around. He'll take the route he believes will lead him to achieve that goal. Tanking seems as good of an option as any, and he'll more than consider it if he stays true to his word and his goal. A guy named Andrew Wiggins could be the prize if the Sixers get lucky.