What Does The Hiring of Sam Hinkie Mean For The Sixers' Offense?

Share All sharing options for: What Does The Hiring of Sam Hinkie Mean For The Sixers' Offense?

As numerous informed NBA observers – including mysterious ones in high places – can attest to, the Houston Rockets were a pretty fun team this year. A good hang, if you will. Those willing to look past Daryl Morey and focus on the product that he put on the floor were treated to very exciting basketball. The Rockets didn't do anything super-complicated, either. All they wanted was to take a good shot every time down the floor, and were remarkably simple in trying to achieve this goal. The final product was the NBA's sixth best offense.

Will the 2013-14 Philadelphia 76ers mimic Kevin McHale's spread pick-and-roll attack down to every minute detail? Probably not. They don't have the personnel to make the "pace-and-space" offense work. Sam Hinkie also has some housecleaning to do before we can speculate about the specifics of an offensive scheme. Picking a coach and making a decision on Andrew Bynum top the list.

Still, we can talk about some aspects of next year's offense. No, Hinkie won't be the coach, but he made clear at the introductory press conference that his choice's basketball philosophy will match his own. Here are three principles he might be looking for the next coach to implement on offense:

1. Playing faster. The Rockets averaged a blistering 96.1 possessions per game, the fastest pace in the league. While playing fast is something that can be dictated by personnel (Ty Lawson's blazing speed, for example), it's also a mindset. Houston's determination to run off of both makes and misses stood out; it was apparent that the coaching staff emphasized creating early offense in transition. Also, the Sixers aren't totally bereft of players with the ability to thrive in an up-tempo system. Thaddeus Young and Arnett Moultrie, two guys whose job security seems on the safer side, are athletic and capable of running the floor. Jrue Holiday has the ability to push the tempo.

Obviously, bringing Bynum back into the fold would limit the Sixers' ability to run. How much, I'm not sure, but regardless I imagine the Sixers play a decent bit faster than this year's pace of 91 possessions per game.

2. Use the corners. As I've talked about ad nauseam, corner threes are a very efficient shot. Hinkie understands this as well, but the major difference between him and myself is that he runs an NBA team. Only Miami shot more corner threes than Houston this season, per NBA.com. This was by design. Here's a screenshot of what I'd describe as the Rockets' base halfcourt offense: 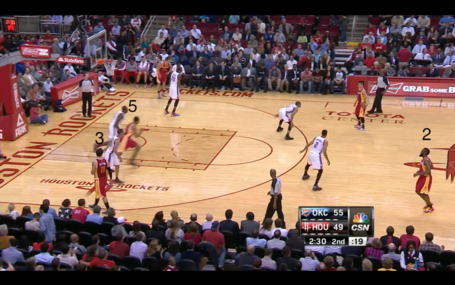 It resembles an extended flex set, except you almost never see a baseline cut – the flex's main action, which in this case would involve Greg Smith (5) screening across for Carlos Delfino (3) – from the Rockets. There's a lot to like about the options this type of set provides, but most of all, the floor is spaced. Jeremy Lin (1) can elect to drive down the right side of the lane and play drive-and-kick with Chandler Parsons (4), wait for a high ball screen from Smith, execute a dribble handoff with James Harden (2), etc. Whatever Lin decides to do, the defense has to be sharp with their rotations because Houston already has them stretched. If a Rocket beats his defender off the dribble, the help most likely has to come from a long way off of a three point shooter. Pick your poison.

Notice how Houston has a three-point threat stationed in each corner. Because teams were deeply concerned with the Rockets' willingness to take and ability to make these shots, driving lanes opened up for their penetrating guards. All it takes is one blow-by, one missed assignment, and then the defense is at Houston's mercy. They'll drive and kick until a layup or open three presents itself.

Regardless of the offense that the Sixers run, Sam Hinkie will not hire a coach who doesn't recognize the value of corner threes. This is a good thing.

3. Exploiting mismatches. Houston's offense wasn't perfect. Towards the end of games, they relied too much on the isolation talents of James Harden. But at least when Harden was going good, they tried to get him isolated on a mismatch late in games (At least in the few games I watched, which was admittedly a pretty small sample size).

When a team's offensive philosophy is so predicated on getting to the rim, like the Rockets' was this season, creating mismatches is at a premium. 1-2 pick and rolls (or any combination, really) at the top of the key, basic "horns" sets, a staggered screen play on the baseline they used to free Harden or Delfino for a three, can all be used to force switches and create mismatches.

This is how I expect the Sixers to play, whoever the coach, whatever the system. Maybe they initially won't be very talented, but they're going to try and work for good shots. That and that alone will be a welcome change of pace.