Toot It or Boot It: Damien Wilkins

Closing time. One last call for alcohol, so finish your whiskey or beer. Closing time. You don't have to go home, but you can't stay here.

Share All sharing options for: Toot It or Boot It: Damien Wilkins

Before we tackle the Damien Wilkins Conundrum, let's go to Mo ... for the official results.

He was a wet blanket that smothered our lottery hopes and dreams with the methodical destruction of a pro wrestling squash match. Damien Wilkins was, well, Damien Wilkins, and we Sixers fans were Bob Jones, a 6'2" 245 lb. wrestler with generic black tights and boots who was billed from Des Moines, Iowa.

After a soul-crushing 3/4th of a season transpired, we became infatuated with a girl named Lucy - a mysterious little vixen who lived on the other side of the tanking tracks. Now, our mothers always warned us about girls like Lucy:

But Damien Wilkins didn't approve. He told us that we were in over our heads; that we could never land a girl, or an octopus, that pretty.

Set your sights lower, he told us. Temper your expectations.

"How about Mason?" he asked. "Mason's more your speed."

We resisted. But the force was strong with this one.

Damien Wilkins helped navigate his team through the season-end struggles of a young point guard, a porous front court, and a lame duck coach. The Sixers won countless meaningless games, and each and every headline in my jaded, distorted mind read, "Parker Lewis Damien Wilkins Can't Lose."

My two biggest fears in this world are snakes and giving Damien Wilkins a four-year contract.

It's not a rational fear, I admit. Giving four years to a player in their 30s is a move reserved only for the Phillies nowadays.

"Get it done, Rube! The window is closing!"

But I don't think people have anything against Damien Wilkins. I certainly don't. I like Damien. I've gotten over the fact that he sabotaged the tanking effort. And besides, I don't think Lucy's heart was really in it. She was just not that into us, et al.

Damien Wilkins shouldn't be lambasted for playing above his head this season. Pro athletes don't care about your fantasy teams, and they certainly don't care about your tanking aspirations. Wilkins' job is to try and extend his NBA career as long as possible, and I imagine he did that. He most likely played himself into another year or two in the league. 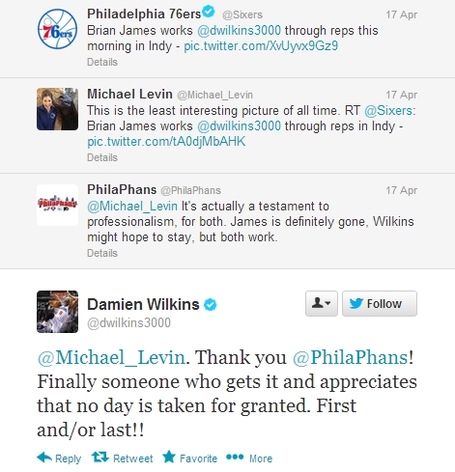 He started 21 games for the Sixers, the most in his career since the '09-'10 season. He averaged just 6.4 per game, but it was a loud 6.4. Each and every precious ping-pong ball the Sixers clung to was seemingly exchanged for a Damien Wilkins' made basket in April. In hindsight, it was a short-sighted exchange. Offering your 1952 Topps Satchel Paige for a Jose Canseco rookie card in the spring of '88.

The Sixers will seemingly, hopefully, be entering a full-fledged rebuilding effort. It's gonna take time. Rome wasn't built in a day. And it wasn't built on a Damien Wilkins' mid-range jumper.

So take care, Damien. May I suggest Brooklyn? Ask for Billy.

Tell 'em the Sixers sent you.

Sixers Offseason: Toot It or Boot It for Current Sixers