The 76ers Are Officially In The D-League Business: Say Hello To The Delaware 87ers

The Philadelphia 76ers have acquired the dormant Utah Flash D-League franchise: The team will now be known as the Delaware 87ers, and they will begin playing games this November at the Bob Carpenter Center in Newark, Del.

Share All sharing options for: The 76ers Are Officially In The D-League Business: Say Hello To The Delaware 87ers

No one covers D-League basketball like your friends here at Liberty Ballers, and the rumors that we reported way back in November finally became a reality this afternoon.

Earlier today, the Philadelphia 76ers announced that they have purchased the operating rights to the dormant Utah Flash D-League franchise (as Ken Berger of CBS Sports tweeted yesterday), and will move the team to Delaware where they will be known as the Delaware 87ers.

[ED. NOTE: PLEASE WATCH THIS AND LAUGH FOR DAYS]

"We believe that the ability to own and operate our own NBA D-League affiliate will strengthen our player development... and be a tremendous asset to the entire Sixers organization," said 76ers' managing owner Josh Harris during a press conference announcing the move. "We are particularly excited that we can situate the team in the welcoming, nearby state of Delaware, especially since there are so many Delawareans who already are avid 76ers fans." 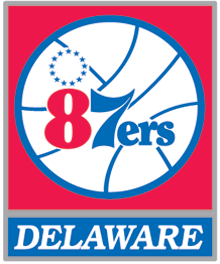 The 87ers' nickname was chosen due to the fact that Delaware was the first state to ratify the U.S. Constitution in 1787. The team will affectionately be known as the "Sevens" (which is confusing since the logo says "87ers", but... YOLO), and beginning this November, they are slated to play their home games at the Bob Carpenter Center on the campus of the University of Delaware.

During today's press conference, the 76ers also announced that sports executive Aaron Moszer has been hired as the team president for the 87ers. Moszer has held high-ranking managerial positions for a number of minor-league franchises over the past 15 years, and most recently was the Assistant Vice President of Sales/Marketing for Ripken Baseball Inc.

Nothing for nothing, having a developmental team just down the road from the Wells Fargo Center isn't a bad thing, and the move makes the Sixers one of just six NBA teams that has total control over a D-League franchise (the Spurs, Lakers, Thunder, Warriors and the Cavaliers are the others). So while we can (and will) have fun at their silly nickname, the Delaware 87ers represent a smart investment that will definitely pay its fair share of dividends in the future.

The Sixers Have Bought a D-League Team, the Delaware 87ers