In this edition of the Sunday Morning Shootaround, Lavoy Allen breaks out the throwback kicks, the Sixers enjoy some D.C. delights, and Swaggy P sends up some prayers for The Black Mamba. 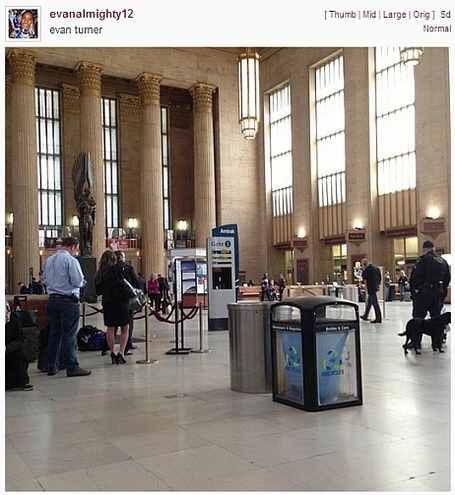 Kudos to Sixers' fans for not posting too many negative comments on this picture that Evan Turner took at 30th Street Station in Philadelphia. With 11 different Amtrak lines running through Philly (some that go as far as Chicago and Miami), I was sure that someone was going to use the opportunity to offer "The Villain" a one-way ticket out of town. Maybe Philadelphia really is the City That Loves You Back (or, at least, The City That Doesn't Hate You Even Though You Only Shoot 42 Percent And Have Shown No Signs Of Consistency Whatsoever). 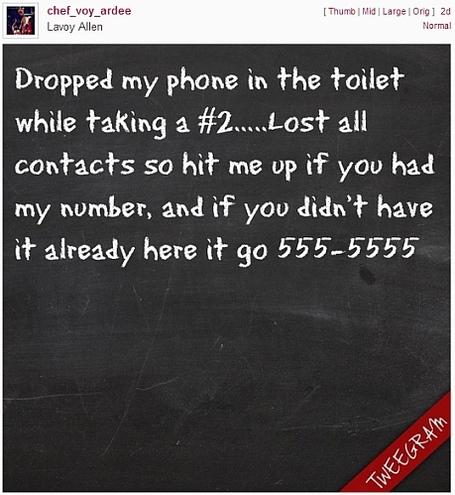 And if you wondered why Lavoy Allen was nominated for the NBA's Tweeter of the Year Award (or Twitterer of the Year, I have no idea which is correct), then wonder no more.

I hear stories of people dropping their phones in the toilet all of the time, and I have no idea how this happens exactly. Bringing one's phone into the bathroom is a common occurrence these days, but unless you have bad hands like Braylon Edwards and/or T.O., it's hard for me to see how the device ends up inside the bowl. For those of you who do have an explanation that doesn't get too scatalogical in nature, please feel free to comment below. 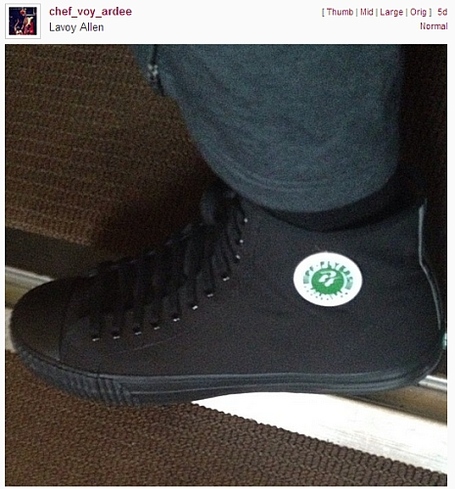 Lavoy Allen is here getting his Benny the Jet on with a pair of PF Flyers. I can't lie - these seem like a steal at $55. I'm not sure if they help you run faster and jump higher, but Benny did steal home at the end of "The Sandlot", so there's that.

They don't appear to help you on the basketball court, however: In the past six weeks, Lavoy has only had one game in which he scored more than six points. It's a good thing that he's used his sophomore year to develop the other aspects of his game... 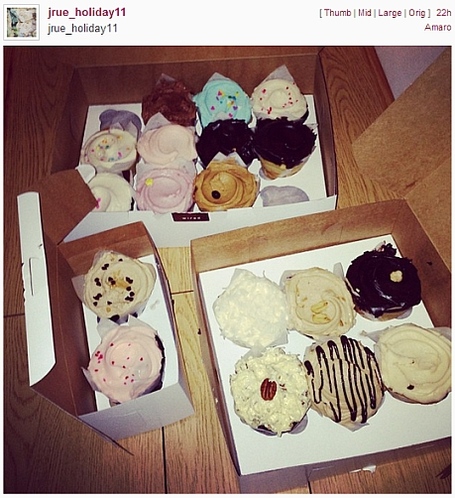 Add the Sixers to the list of those caught up in the cupcake craze. For the record, these came from Baked And Wired in the Georgetown area of Washington, D.C. The store actually refers to these $3.50 delights as "cakecups" (which is technically accurate, but sounds a tad bit pretentious for my taste), and some of their offerings sound like they might be worth a trip to the District:

I don't have much else to say, but the people who commented on this picture sure did...

faith_in_chase Haha my dad just got like the same kind of donuts today lol!!

b_wince Ayy @jrue_holiday11 i sat right next to yalls bench tonight! You played like a boss!

_moneymakin_natee_ @jrue_holiday11. Your my fAvorite player but i will give you 30

tre_basketball Hey @jrue_holiday11 do you remember me. I'm the guy who tried to give you dap with my left hand but you said no do it with the right. 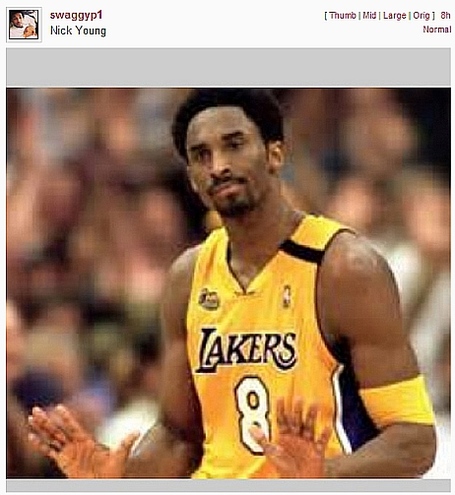 Add Swaggy P to the list of 1,347 NBA players and beat writers who have offered their condolences to Kobe Bryant over the past 48 hours.

If you only happened to read the reaction to the injury, you might have assumed that Kobe's leg had fallen off after he injured his Achilles' against the New Orleans Hornets on Friday night. And while no one likes to see anyone get hurt - especially not a competitor such as Bryant - it's not like this will have any long-lasting impact on the rest of his career.

The recovery time is estimated to be about 6-9 months (3-5 months for cyborgs like Minnesota Vikings' RB Adrian Peterson), and based on what we know about Bryant's workout regimen, there's a very good chance that he'll be back before the end of the calendar year.

Mamba out... for the rest of the season, but he'll still probably suit up again before Andrew Bynum does.