Normally the Philadelphia 76ers official Twitter account (@Sixers) takes on the persona of a bland hype machine. They are not flashy, they hype the team through accentuating the positives, and announce news and giveaways and normal sports media stuff.

But during last night's game against the Atlanta Hawks, things got a little testy when this tweet popped up. 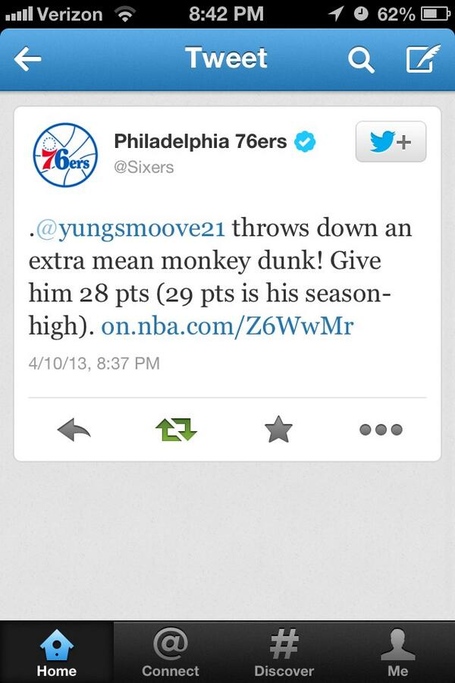 Yep. This is the Sixers account calling a dunk from Thaddeus Young last night an "extra mean monkey dunk." Yikes.

Earlier in the week in a column by Dei Lynam, Thad Young explicitly uses the phrase "monkey dunk" to describe his collegiate dunking against the University of Georgia. In fact, the Sixers account tweeted a video on April 4 of Thad Young using the term to describe said play. In that sense, this is less bad then it initially appeared as "monkey dunk" is not just a term the Sixers employee came up with out of thin air and if you watch the video, it seems apparent Thad is innocently using the term to describe the style of dunk he attempted, even if his choice of words is not great.

But at the same time, it is so important to be cognizant of one's audience and the inherent dangerous symbolism of the term "monkey." The Sixers Twitter account currently has over 177,000 followers. Of those 177,000 followers, probably only a small percentage of those watched the video or read Dei's column and understood the reference when made six days later. All the other readers who saw the tweet reacted with confusion and outrage as "monkey" carries with it a strong racist connotation I need not explain. One quick Google Image search of "black people monkey" will show you all you need to know and then some.

The stereotyping behind the phrase "mean monkey dunk" is absolutely vile and regardless of context, is not a phrase that should be used to describe a dunk to 177,000 people. Even if the phrase was coined by Thad himself, the person doing the tweeting for an official account should recognize how the phrase can be interpreted and stay away from repeating it all costs. To not do so is at best irresponsible and ignorant.

The Sixers twitter account has come under a lot of fire recently, and this incident is not helping matters. Even though the offensive tweet was quickly deleted, the Sixers need to come out with an apology acknowledging the mishap and vowing further sensitivity in future tweets. The Sixers twitter account gets a lot wrong a lot of the time. Let's hope they come out with an apology and try to patch this one up.

(hat tip to @PhilaBCoulter for the screen grab)