In this edition of the Sunday Morning Shootaround, we pass along some advice to the rookies of the NBA, give you our thoughts on the best Mexican restaurants in America, and celebrate the return of A.I., who apparently did some celebrating of his own. 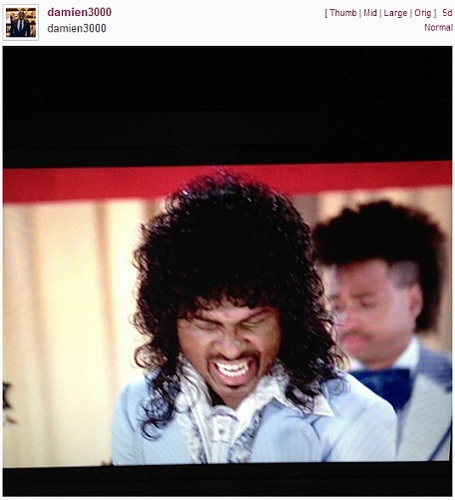 At least the person who picks the Sixers' in-flight movies hasn't given up on this season. Coming To America could very well be the greatest comedy of all-time, and if you disagree, please feel free to comment below so that we can properly identify you before we disable your user account.

For those who haven't seen it, Coming To America is played almost as many times per week as You Got Served: Not only was it on late last night, but it will be on Comedy Central again this evening at 5:29 ET. There's even a basketball scene in the movie that's far more entertaining than anything we've seen from the Sixers this year.

Anyway, our favorite basketball team watched this on the way back from last week's game against Utah: Is there any coincidence that they're undefeated since? I think not.

Sixers Fan Appreciation game tonight vs. Bucks. Some 1000 prizes being given out plus 5000 Moe's burritos and all fans get 76ers LED light.

Fans: The Sixers really don't "appreciate" you - otherwise, they would have given you Chipotle instead of Moe's. The Washington Wizards know this: Earlier this season, they had in-arena DJ/hype man Big Tigger (formerly of BET) throw pre-made Chipotle burritos into the stands during games (I don't approve of this practice, but it's the thought that counts).

And since I know you're curious (Editors' note: We know that you aren't, but this is a great way to fill up space), here are my personal ratings for fast-casual Mexican restaurants:

For the record, I know that you queso fans may bump Qdoba a notch or two up your own rankings. Either way, EVERYONE knows that Moe's is last. Look... I understand if you don't "get" the music of The Weeknd. You could even be under the (incorrect) impression that NHL '94 is better than NHLPA '93. But you CAN'T prefer Moe's over any of its' competitors.

As someone told me in a completely unrelated conversation, you only eat at Moe's if it's at the airport and you're starving nothing else appealing is open. And even then, you wonder if the peanuts and crackers that they'll give you on the plane can hold you over for the entire flight. 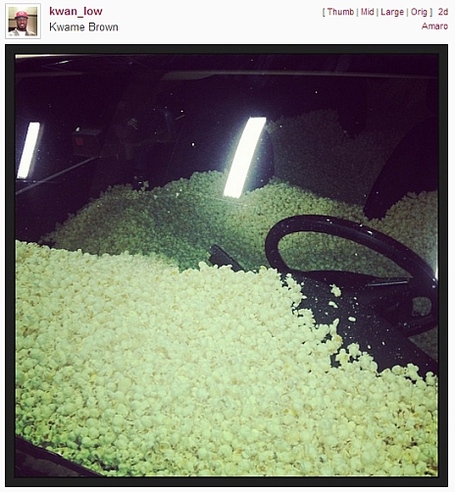 Rookies: This is what happens when you don't do as the veterans say.

Dion Waiters was the victim in this case, so it really has little relevance to the Sixers. It does, however, give us a good reason to post this video of Kings' forward Jason Thompson coming out to a car full of popcorn during his rookie year. Please take note of a young Spencer Hawes talking about his "'Scalade."

Did you feel something? That was @jrue_holiday11 getting busy on the rim!

This is EXACTLY the type of fugaziness we're talking about in relation to the @Sixers Twitter handle. I'm sure the interns manning the feed are doing the best they can, but in the immediate aftermath of Jrue Holiday slicing through the Bobcats' D and punching on Bismack (Who Wants To Sex) Biyombo, this is the best you can come up with?

I didn't interpret the tweet in the same manner that Dennis Deitch of the Daily Times did - it was just a crappy response to the most exciting play of the entire night. Truth be told, they should have let Allen Iverson man the Twitter feed during the game. Speaking of which...

No love spared when The Answer is in the house - twitter.com/Sixers/status/...

For the 24 of you who attended and/or watched Sixers-Bobcats last night, the highlight of the game was the appearance of one Allen Ezail Iverson, who presented the game ball prior to the opening tip.

Since it was A.I. bobblehead night, I thought it was a foregone conclusion that Iverson would be in the building. That wasn't exactly the case, however: A.I. reportedly had a prior engagement, but was able to re-arrange his schedule so that he could swing through Philly for an impromptu trip to Mitchell and Ness to cop that dope Phillies' warm-up jacket appearance at the Sixers' game.

And while some may be tired of "The Answer", I can't get enough of the 6-foot guard out of Georgetown. Molly Sullivan caught up with Iverson just as the second quarter began, and for the first time ever, A.I. sounded like he was finally coming to grips with his post-NBA career. While he said that he'd welcome the opportunity to play in the league again, he was more concerned about being the best father that he could be. It was refreshing to hear such words from A.I., especially in light of a judge coming down extremely hard on him in his recent divorce settlement. Perhaps the man that brought us so much joy for so many years is finally turning over a new leaf.