What does Aaron Barzilai have to tell us about tanking, draft position, and player values?

As the Tank train known as Tankadelphia is now full-steam ahead, I was curious as to the difference in the value of the various draft picks.Yes, we know it is better to have the #1 vs the #31 pick, but historically/statistically is there much difference between say the #6 pick and the #12 pick? I started to do some googling, figuring someone had done this research before and I could save myself some time. And, in fact someone had done the research, and it turns out he is none other than the Sixers’ director of analytics Aaron Barzilai. This makes this article interesting for two reasons. 1 – It is an interesting use of data connecting draft order, player value, and guaranteed salary. 2 – It is written by a guy who, hopefully, is being used as an adviser for the Sixers draft process and therefore could give us insight into what they are/will be thinking. I’m going to highlight two particular graphs he uses in the article to make 2 points about the draft.

Point #1 – In the range where the Sixers are most likely to draft, getting the highest value player appears to be more about luck than draft order. 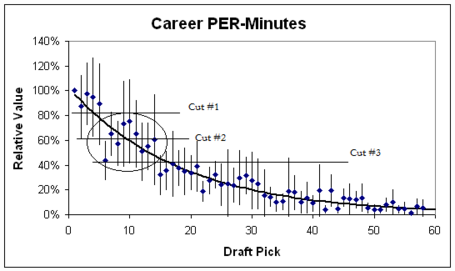 In this graph Barzilai takes the value of each draft position over several drafts (the points on the graph) and then fits the ‘best fit’ line connecting these points in order to establish a pattern (the curved line). As you can see, and as you’d expect, players drafted earlier have higher average value than those drafted later. The relationship is essentially an exponential one, meaning as the we go up the draft order the value doesn’t just increase at the same rate (that would be a linear or straight line relationship), but the increases in value between picks get larger and larger as we go up to the number 1 pick. Although this relationship Barzilai describes is accurate for the entire draft, if you dissect the draft into a few sections or tiers you can see that this relationship between draft order and value isn’t quite as clear.

I’ve marked up Barzilai’s graph with 3 cut lines and have also circled the area where the Sixers are most likely to draft. Above the first cut line we see the top 5 picks, and it is pretty clear there is more value in those picks than any of the rest of the picks (and probably more than most of the 2nd round added together). Strangely, the number 2 pick has been worth a lot less than the 3 and 4 pick. I say it’s strange because the data doesn’t cover the Evan Turner pick. I’ve circled the next tier because it is the remainder of the lottery and where the Sixers are most likely to pick. Cut #2 is what I roughly estimate the relationship between draft order and value for the circled segment of the draft. This is a flat line, which is means there is essentially equal value between pick 6 and pick 14. This is drastically different than the relationship between pick 1 and pick 60. What this means is that, at least from this data, it looks like whether you pick 6th or 14th your likelihood of getting someone of value is essentially the same.After cut 3, it looks like the talent becomes significantly lower and getting someone of value becomes a lot less likely.

Of course, this data is limited and making any hard and fast claims can be dangerous, but if you take this seriously it would mean it doesn’t matter if the Sixers tank as long as the get into the lottery (unless than can get into the top 5). This is particularly true considering who the Sixers have drafted in recent years; they aren’t the Spurs or Thunder, so we can’t exactly expect them to outperform the average NBA team in talent evaluation.

Point #2 – The three draft picks where the Sixers are most likely to draft 9-11, are pretty close to being the sweet spot between draft pick value and guaranteed salary. 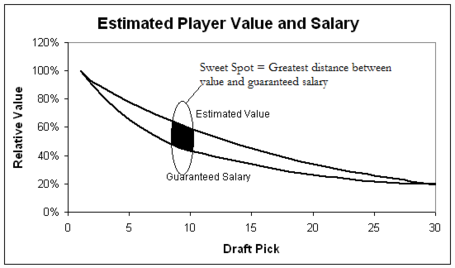 Barzilai’s graph shows the estimated value ‘best fit’ line referenced above, but also adds a second line which is the guaranteed salary for each pick. You can see towards the top of the draft and towards in the end of the first round those two lines basically merge, but in between there is a ‘deal’ to be had. This gap, where the player’s guaranteed salary is lower than their value, is the largest around pick 9. Now, obviously I think we’d all want the Sixers to spend a little extra cash to move higher up on the value scale, but from a value/dollar perspective the 9th pick isn’t a bad place to be. Given the information discussed in point #1, drafting a little later, say around 13 or 14, may give you the chance to get the most bang for your buck.

What is the take away from all this? Well, for me it might just be that I should feel OK allowing myself to root for the Sixers to actually win some games down the stretch. As someone who thinks the draft is generally how you end up making your team better, lately I have been torn between wanting the Sixers to play well and getting a high draft pick. This evidence suggests that unless the Sixers can tank all the way to the top 5, and as long as they don't untank themselves into the 8th seed of the playoffs, it might not matter how many games they win in the last couple months of the season. Go Sixers!