Scroll down for hair.

Share All sharing options for: Andrew Bynum Update: Practice in a Week or Two, Hair Reaches New Heights of Crazy

I've tried to make sense of exactly how bad the Andrew Bynum injury fiasco has been for all parties. I'm still working on it. But he's still doing basketball-esque things and "trying" to get himself into game shape. Bynum spoke to reporters today about his injury situation as he has done the past few weeks and I'll summarize what he said to Moore, Cooney, Vito, Finger, and the other guys below. Oh and a special Hair Update as well.

Practice in a week or two.

He doesn't know if he can ever play without pain.

OK, well it looks like he'll just have to deal with it then. Everybody who plays professional sports for a living has some amount of nagging pain that won't go away. If it takes some rest, it takes some rest. Give him a day or two or seven off once in a while. That's fine. But wait.

Bynum doesn't think it gets worse by playing.

Wait, what? Then why aren't you just playing then? Apparently there's some miscommunication here because Cooney tweeted that then Tom Moore tweeted a quote saying he definitely can hurt it more by playing. To sum up: Nobody knows anything.

He hasn't considered the idea of not playing this season.

The Sixers have treated him great and he hasn't ruled out signing with them this offseason.

Kind of an "obviously" but at least he's not going out and saying there's a lot of bitterness there. He hasn't ruled out signing with them because he wants a lot of money and the Sixers can give it to him.

No one is more frustrated about him not playing than he is.

HI ANDREW MY NAME IS MIKE HAVE YOU READ MY BLOG?

Then Collins talked to the guys.

He's the only one who knows when he can play.

Collins is SO SICK of talking about when Bynum is getting back. It's his least favorite thing. So he keeps deferring to Andrew to illustrate just how out of his control this whole situation is. Pass that buck, Doug. Pass that buck.

Gonna be tough to make the playoffs without him.

But most importantly, HAIR HAIR HAIR HAIR. There's literally nothing else I can say about this than the hair doesn't say for itself already. 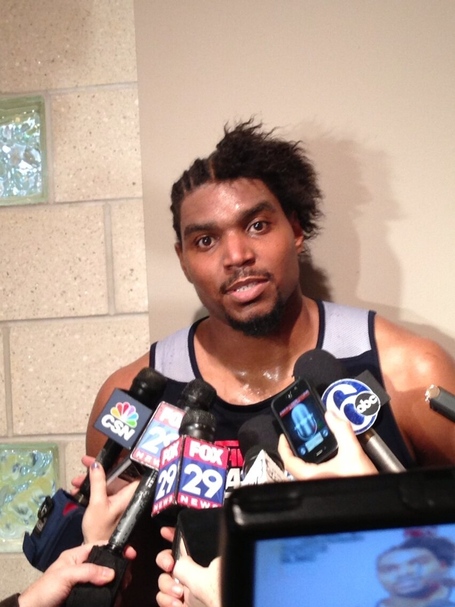 Oh and here he is as Two-Face. I believe in Harvey Bynum. I think.