In a very special Monday edition of the Sunday Morning Shootaround, we give you a behind-the-scenes look at Jrue Holiday's weekend in Houston, catch up with a very hungry Kwame Brown, and examine why Jason Richardson lacks something that many 13-year-old girls have had for years.

I'm not the guy who typically concerns himself with what's in other people's wallets, but how is it that J-Rich is a 12-year NBA veteran and JUST NOW signed up for a phone plan with unlimited minutes? People in that tax bracket should automatically have plans with unlimited minutes - am I wrong on this? The only exception are those who happen to be phone averse like Kanye West (who only started carrying a cell phone once he started dating Kim Kardashian - true story).

Furthermore, J-Rich is on Sprint, which is unequivocally the worst service in America. Case in point: While Verizon has been killing the LTE game, Sprint just started installing their 4G network about an hour and a half ago. By my calculations, J-Rich should finally be able to use his iPhone to its full capability around the time he comes back from his knee injury. 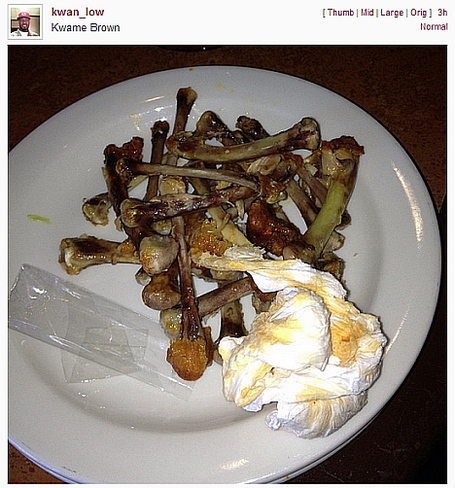 If this whole basketball thing doesn't work out, Kwame Brown would be a hell of a dark horse contestant at next year's Wing Bowl. I've seen skeletons in the Mutter Museum with more meat than what Kwame left on that plate. 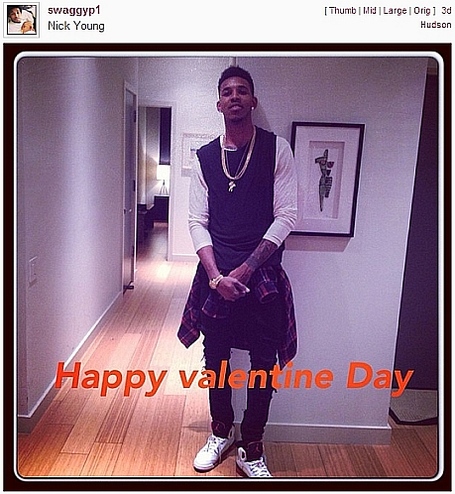 I was going to comment about Mr. Young's grammatical error as well as his choice of attire for his Happy VALENTINE'S Day Instagram post, but the replies to his photo are far more entertaining that anything that I could have come up with: 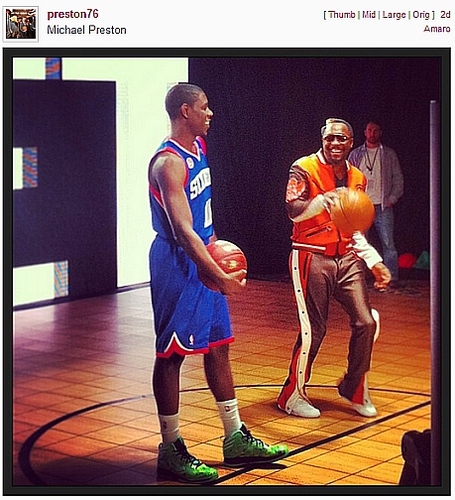 To be fair, Liberty Ballers blog chairman/trustee/emeritus Spike Eskin actually had the perfect response to this picture:

the good part about never being an NBA all-star is never having to pretend I want to hang out with will I am.

But shortly before posting this piece, Liberty Ballers received exclusive audio footage of a conversation between Sixers' PR director Michael Preston and Jrue Holiday mere minutes before this photo was taken. A transcript of the conversation is below:

Michael Preston: Jrue - here's your itinerary for the weekend (hands Holiday a piece of paper).

Jrue Holiday: That's what's up - thanks! (Scans sheet for a few seconds before pausing) Photo shoot with William?

Jrue (shakes his head): Not really.

MP (incredulous): You don't know the Black Eyed Peas? They're the ones who sing, um... (scrolls through phone's playlist) "I Gotta Feeling" and... "Let's Get It Started."

MP: Nah. Just stand there, do a few crossovers and that's pretty much it. We should be done in about 15 minutes. 20 at the most.

Jrue: Is Fergie going to be at the shoot?

Jrue: That's cool. I'm just glad that I don't have to hang out with Ke$ha.

MP (muttering): You must not have looked at the schedule for Sunday yet...

Jrue: What did you say?

MP: Oh... nothing. By the way, I picked up a couple of shirts for us at the Galleria this morning (hands Jrue a gift-wrapped box). If you don't mind wearing it on Sunday, that would be cool. (phone buzzes) Hey... it's time to go. (phone buzzes again) It's Doug - he said to tell you to check your phone... he's been trying to text you for two days now.

Jrue: He has? Oh... it must have shut off on its own (makes motion to turn cell phone on, doesn't actually do it.) 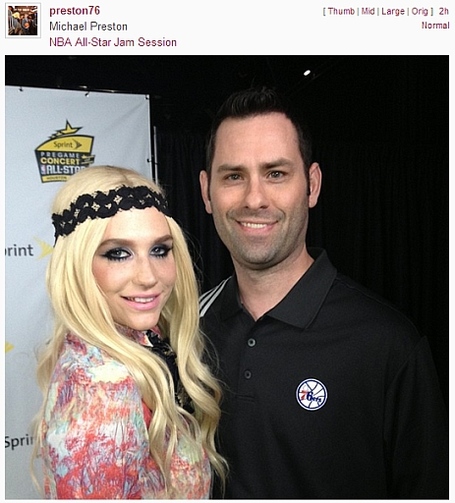 Well... look who we have here. To be honest, I had no idea that the woman in the picture was the aforementioned Ke$ha, and I wouldn't have known if Mr. Preston didn't put her name in the caption. If Ke$ha walked into my job with a sign around her neck that said "My name is Ke$ha, and I sing 'Die Young'", my initial thought would be that it was one of those Olsen twins, or at least their other, more talented, less famous sister Elizabeth (tell me you don't see the resemblance).

I'm concerned that a multi-billion dollar operation like the NBA can't get anyone better than Ke$ha for a pre-game concert. I mean, I GUESS it beats out that odd Fall Out Boy/2 Chainz collaboration prior to the Slam Dunk Contest, but not by much. Adam Silver: I'm counting on you to fix all of this by the time All-Star Weekend 2014 rolls around.

Thank you, Spencer Hawes. Thank you for giving me the opportunity to talk about the blouse shirt that Kevin Durant wore on All-Star Saturday Night, the monstrosity that Russell Westbrook sported, LeBron James' cotton/leather sweater (with the same lion that I have on my Old Navy gear), and the Chris Paul leather-on-leather combo. When Craig Sager is the most conservative man in the building, then there's a serious problem.