Instead of making fun of Evan Turner's tweets for the 64th week in a row, we decided to turn the camera on ourselves.

Last week, Michael Levin sent me an email with the tweet below saying that it had to be included in this week's Shootaround. Quite naturally, I obliged.

BREAKING: for the first time ever, I dunked. A Basektball. On a basketball hoop. 10 feet.

The 6'12" Brandon Lee Gowton may not have been impressed by Mr. Steidel's feat, but I definitely am. Dunking a basketball is a transformative moment in a man's life.

(Note: I've never actually dunked on any basketball hoop that didn't say "Nerf" on it, but I imagine that it feels pretty good to throw one down. I know that I used to get amped up throwing one down on my nephews when they were toddlers.)

No video exists of Tanner's dunk, but we do have a clip of the celebration afterwards.

I'm sure it wasn't that bad. 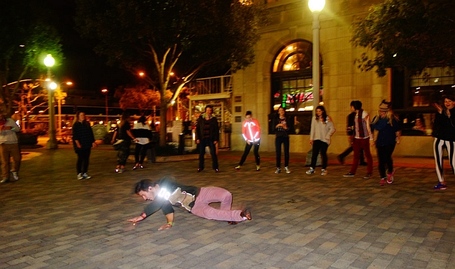 By the way, there's video of the incident as well. Levin's barrel roll at the end is reminiscent of the moves that I used to do in "Afterburner" on the Sega Master System.

These teams should be forced to watch A Madea Christmas

NO ONE should be forced to watch A Madea Christmas - that falls squarely under the banner of cruel and unusual punishment. Guantanamo Bay has nothing on Tyler Perry in drag.

"As far as I'm concerned, you're either on Team Bret or Team Shawn" -- @wheresbenrivera

The statement above may be the truest thing ever written by any member of Liberty Ballers. It's like the Hatfields and the McCoys, Eagles vs. Cowboys, Team Edward vs. Team Jacob... you can't like both Bret Hart and Shawn Michaels. It's just not possible.

By the way, the correct answer is "Team Shawn." Bret Hart is the most boring "superstar" in the history of wrestling (although the "Wrestling With Shadows" documentary is EPIC), and his stint with WCW was largely forgettable.

Conversely, Shawn Michaels had that special "it" factor, whereas Hart couldn't find charisma if he spent the whole day on the set of "Angel." And while "The Hitman" may have been the better technical wrestler, it bears noting that "The Heartbreak Kid" won Pro Wrestling Illustrated's "Match of the Year" award 11 times.

There is nothing worse than the Kiss-Cam at pro sporting events. The definition of tired.

The Kiss-Cam is especially dumb because:

1) No one wants to be on it.
2) Much of the time, the pair pictured on the screen isn't an actual couple. (I mean, really... how many times have we seen the "No! He's my brother!" reaction?)
3) If they do happen to be a couple, then the resulting kiss winds up being awkward. Like "watching your grandparents make out" awkward.
4) It always ends with a shot of the last two players on the opposing team's bench. Seeing Byron Mullens and Willie Green refuse to kiss was funny the first time it happened, but not so much on the 175th go-around.

MCW...messed around and got a triple double last night. It was a good day. #Sixers http://t.co/P5Kq9mwo4f pic.twitter.com/PwW8WyzNGT