The Sixers fall to 7-13 on the season after their 105-88 loss to the Charlotte Bobcats on Friday. Philadelphia is now 1-8 on the road this season.

Share All sharing options for: Sixers Get Caught In Charlotte's Web, Lose 105-88

The crowd at the Time Warner Cable Arena was lifeless from the opening tip. And, except for a few notable exceptions, the energy level of most of the players seemed to match the intensity of those in the stands.

The Philadelphia 76ers' (7-13) dropped their eighth straight road game on Friday, falling to the Charlotte Bobcats (9-11) 105-88. Both teams had two full days off heading into the matchup, but you couldn't tell from the action on the court.

The Sixers have lost eight straight on the road, by an average of 17 points per defeat.

Each team was without one of its starters: Bobcats' forward Michael Kidd-Gilchrist missed his first game after breaking his left hand last Tuesday, while point guard Michael Carter-Williams stayed back in Philadelphia to rest his sore right knee. But even in their respective absences, the game went according to plan for the 76ers... at least for about 10 minutes or so.

As usual, the Sixers were able to seduce the opposing team into taking an inordinate amount of shots from beyond the arc, and the Bobcats knocked down just four of the 21 three-pointers that they attempted on Friday. It was a wise strategy, especially against a team that is shooting a league-worst 29 percent from downtown this season.

Without the worry of getting beat by the 3, the Sixers were able to collapse on Al Jefferson early, holding him to just 1-for-5 shooting in the first quarter. However, a 9-0 Bobcats' run late in the period gave them a 36-33 lead.

The run of runs continued in the 2nd: The Bobcats ripped off the first eight points of the quarter to sprint out to a 11-point advantage. They would never trail again for the rest of the night.

Quite simply, Charlotte beat the Sixers at their own game: Running whenever possible (the Bobcats finished with a 22-10 edge in fast-break points) and making an impassioned effort to work the ball inside (the Bobcats hade 58 points in the paint on Friday).

Jefferson uglied his way to 14 points (on 6-for-21 shooting) and 12 rebounds, but it was a total team effort for the Bobcats, who had six players in double figures. Jeff Taylor led Charlotte with 20 points, while Gerald Henderson and Kemba Walker (who had a season-high 10 assists) chipped in 18 apiece.

Shooting a hair over 40 percent from the field won't get the job done for the Sixers on most nights, and it sure won't work when the other team shoots a respectable 46.2 percent. Even worse is the fact that the Bobcats nearly doubled the 76ers up on free-throw attempts (25 to 13), with Evan Turner (16 points on 7-for-18 shooting) getting to the line just once. 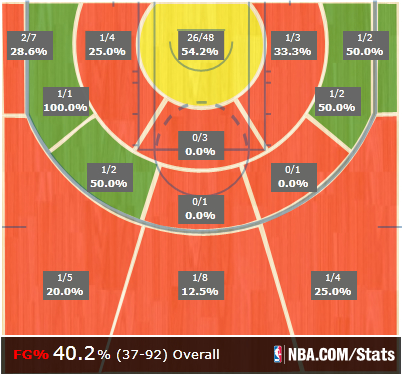 There were a few positives to take out of Friday night's debacle. Tony Wroten (21 points, eight rebounds, nine assists) had yet another star turn starting in place of Carter-Williams, and Hollis Thompson (12 points, six rebounds) continues to excel as a starter.

Given the level of effort that was on display tonight, it's only fair to wonder how much the Sixers will have in the tank after flying back home to face the Denver Nuggets on Saturday night. Even those clamoring the loudest for the tank never imagined that the 76ers would be run off of the floor by the Bobcats on the front end of a back-to-back.