Value skyrockets if the mullet makes a return.

Sam Hinkie and his Sixers have three big pieces they can move before the trade deadline -- Thaddeus Young was covered last week, and we generally agreed that he doesn't have to be moved unless Hinkie finds someone willing to pay a premium price for him. Evan Turner will be covered next week, just before the December 15th date that we've had earmarked for months. That leaves none other than the Great White Seattlite himself, Mr. #HanginWithSpencer, Spencer Hawes.

While Spencer has been playing undeniably fantastic offensive basketball this season, there aren't many people who think he's long for this world as a Sixer. Let's dig in.

Some context: After his rookie contract ran out, Spencer signed a two-year deal in the offseason of 2012 worth $6.5 million each year. That was during the organizational shift when the Sixers were all about signing mediocre guys to short-term deals. The saving grace for each move was "at least it's only ___ years" and not much else. Spencer's signing in particular generated an emergency podcast between Jordan and me as well as this July 4th-themed sentence that I'm no longer proud of: "It feels like an American flag was just shoved up my rectum and out my throat." The past is fun!

Never been more confident in my whole life. -Dave Rueter upon walking into a Las Vegas casino and putting $20 on 00 for Spencer.

Anyway, now he's an expiring contract playing the best basketball of his career. If the Sixers wish to retain his services, they will have to offer him a brand spanking new contract as he is an unrestricted free agent.

Because Spencer has shown the propensity to be a knockdown three-point shooter (especially from the top of the key AKA Bainbridge), there is the school of thought that indicates he'd fit nicely on a Sam Hinkie/Brett Brown team for years to come. He's certainly benefited from the new regime through 17 games -- career bests in PER (19.9), true shooting (60.4), defensive rebound rate (26.5), and, most drastically, his percentage of shots attempted that were taken beyond the arc -- over a third at 33.8 compared to last year's 10.7.

Like Thad, though, any consideration of Hawes' future is directly tied to his fit with Nerlens Noel. And it seems like they don't make the perfect pair. While Hawes' outside game and Nerlens rim-circling work well on offense, the idea of playing either one of them on the perimeter defensively -- especially Spence -- gives me night terrors.

In an ideal scenario, Hawes would be the first big off the bench. Problem is, while he's playing this way, he's worth a lot more money than what the Sixers would like to pay him for that role. If the trade deadline goes by and Spencer is still a 76er, I'd still chalk it up as unlikely because there will be 29 other teams vying for his services and almost all of them willing to pay a free agent more because of their proximity to contention.

I wouldn't totally rule out the Sixers taking a shot at signing him to a similar deal to the one he signed in July of 2012, but I bet he gets more cash elsewhere.

If the Sixers trade Spencer Hawes, I'll be devastated. That being said, trade him as soon as possible.

So let's assume the Sixers will be or are currently trying to move Hawes. He's currently in Wight Howard mode, and if empirical evidence is to be trusted, it's only a matter of time before the clock strikes midnight and he becomes Steve Hawes once more. While I don't think that's as likely (threes help and so does the pace), it's certainly worth thinking about moving forward. As in: trade him soon before he maybe craps out.

If we put all our faith in opposing broadcast teams, Spencer is a superstar. Reality comes to a slightly different conclusion. It took a long time for the Celtics series KG matchup mud to wash off him, but I think we're mostly there. Perception seems to be of Spencer as a likeable goof that can rebound a bit, pass a bit, and hit an open shot, and in some cases, a well-defended-one-legged-fading-buzzer-beater-from-the-corner-finger-guns. Basically, a valuable role player on a fair contract.

What's that worth? He's a UFA regardless, so how much can you get for half a season of Spencer? No doubt Hinkie will be hunting for a first-rounder. Contenders that are looking to shore up their frontcourt seem to be the most likely destination, so odds are it'd be a pick in the 20s if we're talking this year. 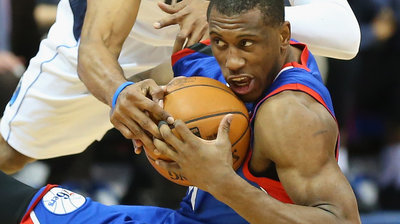 Is the best move simply holding onto Thad?

That's why I dream more of a 2015 pick where most anything can happen between now and then (look at Brooklyn!) and an asset that teams are less savagely protective of than a pick in the upcoming draft. Plus it's nice to have something in your pocket. Like OK, no matter what happens (i.e. Sixers make the playoffs next year and cough up their first rounder to Miami, thanks Doug and Rod!), they'll have a first rounder or two in next year's draft. It's like kicking off in Madden -- fall into any hole and it's like "at least I get the ball at half."

At least logically, I think half a season of Spencer is worth a late first-rounder to a contender that thinks itself one piece away. Teams qualifying that can trade their pick include: Houston, Oklahoma City, and San Antonio. I don't see any of those as wildly likely options, which means a 2015 first-rounder is the better bet.

Either way, I think there's about a 95% chance Spencer isn't in Philly next season. With that in mind, do you dangle him as trade bait or just let him walk and take the cap space to use elsewhere?

No matter how you slice it, trading him makes the most sense. That bums me out because he's an incredibly fun player to watch and cheer for now that Sam Hinkie is running the show and we don't have to worry about sustained mediocrity. Even when I hated him, it was always his game, not his personality. Gotta hold onto the goofy players. Nobody cried for Darius Morris.

Sometime within the next two months, Hawes will be moved for a pick or something like a pick (Hinkie-esque undervalued former first-rounder -- Bennett? McCollum? MKG? T-Rob?), and the Sixers will lose more games because of it. Hopefully he goes to a contender where he can prosper in goofitude on a national stage. He deserves as much.