There was a reason the Liberty Ballers staff was jumping up and down for a year when news broke that the Sixers were getting a D-League team. This is that reason. Two days after signing with the Delaware 87ers, Kendall Marshall made his D-League debut against the Rio Grande Valley Vipers, a team that had taken 96 threes in their past two games. Needless to say, they are Houston's affiliate and loaded with legitimate NBA talent. I watched most of the game, which was available on Youtube, because I am insane.

And at least for one game, Kendall Marshall came to play. In 37 minutes of action, the Phoenix Suns castoff tallied 31 points on 11-18 shooting, including a 5-9 mark from beyond. He didn't even have his name on his jersey yet. That would've been enough (dayenu), but he also added 10 assists and 9 rebounds, falling just shy of a triple-double in his debut. Know who else did that? Michael Carter-Williams. That's synergy between the Sixers and Sevens.

What Can Kendall Marshall Do For The Sixers? 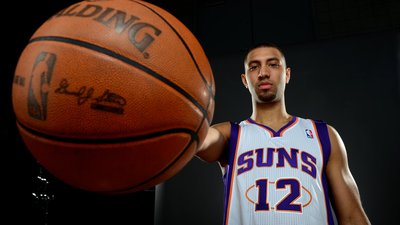 Now, Marshall also added 7 turnovers, but it's been months since he's played basketball and RGV plays fast and loose on both ends of the court. The final score was 139-126 Vipers, knocking the Sevens down to 0-3 on the season. They are also tanking. RGV took 54 (!!!!!) threes on the day, making 21 one of them. Delaware was 10-28 from beyond. Here's the full box score.

Kendall still can't play much defense -- although nobody playing the Vipers can -- but watching him look for his shot was a real delight. The 31 points is the most he's scored SINCE HIGH SCHOOL (his high at UNC was 22). And really, the competition was solid. He's got great change of pace and finished pretty crafty around the rim. His shot is not great still because the release is so slow, but going 5-9 from deep is nothing to sneeze at even if he's in a gym by himself. Keeping defenses honest is all he needs to do. And his height certainly contributed to the 9 boards.

With Michael Carter-Williams nursing a "sore knee" after playing a thousand minutes against Orlando and notching his own triple-double, is there a shot that Hinkie signs Marshall right away to play tomorrow against Charlotte? I'd say it's unlikely, but that's a guess. Remember, though, the Sixers do not own him -- they would need to waive someone else to sign him to an NBA contract, and he's also available to any other NBA team that wants him.

Could it be that last year he struggled because of his recovering broken wrist and the terrible atmosphere in Phoenix? Really, I just feel a lovely sense of vindication, especially towards a certain Michael Baumann.

Also was very, very impressed by Reeves Nelson (who now looks like this), putting in a ridiculously efficient 28 points on 13 shots in only 26 minutes of action. Reggie Johnson is enormous and has exactly zero jumping ability. Thanasis Antetokounmpo was also delightful and Greek, dropping 17 with a few nice moves. Aquille Carr only played a few minutes at the end, but when he did, it looked like he was somebody's little brother that they finally let in and draw up plays for only him to get shots. He's a rascally little fella.