Do You Believe In (the) Magic: Sixers-Magic Game Preview

The Orlando Magic rather handily defeated the Sixers on Thanksgiving's eve, partially in part to the injuries to Spencer Hawes and Tony Wroten. Will tonight be any different?

Share All sharing options for: Do You Believe In (the) Magic: Sixers-Magic Game Preview

This past Wednesday, the Sixers began a crucial five game "Tank Trip" in Orlando. The "Tank Trip", a phrase I just coined while writing this, consisted of match ups against the aforementioned Magic twice, the New Orleans Pelicans, Detroit Pistons, and ending with the Charlotte Bobcats, all teams that could quite possibly end up in the draft lottery.

Philadelphia has done their part so far, losing three of those five contests as the Sixers return home for game four against the Magic after they trounced the Sixers on Thanksgiving's Eve, 104-95.

Our old friend Nik Vucevic led the way for Orlando, scoring 21 points and bringing down 16 rebounds in only forty minutes of action. Highly touted rookie (and surprisingly good singer) Victor Oladipo and veteran guard Arron Afflalo chipped in 18 points of their own.

But alas, there was good reason behind Philadelphia's poor performance. The team spent the game minus the services of Spencer Hawes (knee soreness) and bench king/god Tony Wroten (lower back strain).

The re-addition of Hawes into the lineup certainly helps, not only for his double-double average, but his ability to match up against Vucevic. Well, match up better than Lavoy Allen, at least. Allen saw an insane 30 minutes of action, mostly matched up against Vuc, where the former USC product battered Lavoy in the paint, then proceeded to take the undersized Center's snack money.

Also giving the Sixers fits last week was the XL baby, Glen Davis. Davis added 19 points on 9-15 shooting, and the Sixers will really have to respect his midrange game. 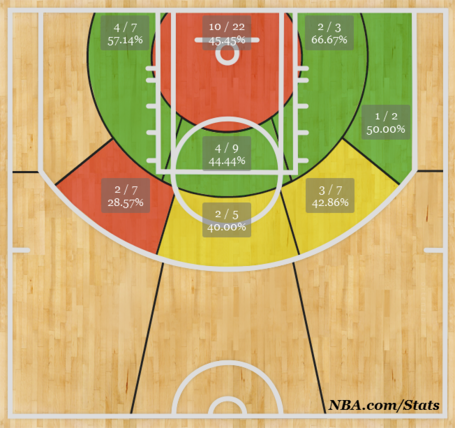 Thaddeus Young will have the responsibility of stopping him for most of the evening.

Tonight's contest will also be a nice test for Michael Carter-Williams as the rookie begins to make his way through the NBA. Carter-Williams struggled offensively in Sunday's loss to Detroit, shooting just 5-15 from the floor. It'll be worth watching whether or not MCW can shake off his recent poor performance and bounce back.

Defensively, Orlando gave him fits on Wednesday, as he's shown serious issues defending the pick and roll. He should be prepared to see a lot of that once again tonight.