Sons Of Liberty: Delaware 87ers Are Heading in the Right Direction

The Delaware 87ers' record may be less than ideal, but fear not: The team is headed in the right direction.

Share All sharing options for: Sons Of Liberty: Delaware 87ers Are Heading in the Right Direction

Ignore the 2-10 record for the moment: The goal of the Delaware 87ers is to become the ideal player development incubator for the Philadelphia 76ers.

But while the benefits are clear, there hasn't been much of an impact on the Sixers themselves as of yet. Two former Sevens players have already moved on to higher-level competition, but neither made the drive up Interstate 95. Early season standout Darin Mency signed with the London Lightning of the National Basketball League of Canada, while Kendall Marshall recently joined the Los Angeles Lakers.

There's no reason for alarm, however: The wholly-owned 87ers are the key element of a long-term plan that will (hopefully) make the Sixers one of the most successful, vertically-integrated organizations in the NBA. The Sevens' operation in Delaware has been referred to at times as a laboratory of sorts, and the results of some of the team's experiments have been interesting, to say the least.

The influence of Sam Hinkie is clear: 86.3% of the Sevens' field-goal attempts this season have come from either inside the paint or beyond the three-point arc. They aren't quite as averse to the "long 2" as Daryl Morey's Rio Grande Valley Vipers (who have taken just 59 mid-range shots in 12 games), but it's obvious that analytics play a huge role in what the Sevens do on offense. During an interview earlier this month, 87ers' head coach Rod Baker admitted as much, and noted that he's in constant contact with Sixers' head coach Brett Brown:

"I talk to him a lot. Brett and I talk an awful lot. We try to do a lot of things that they do... we surely get up the same kind of threes that they do. The talent level is a little different on both ends, but I think that we understand what they do... the synergy between us is pretty good." 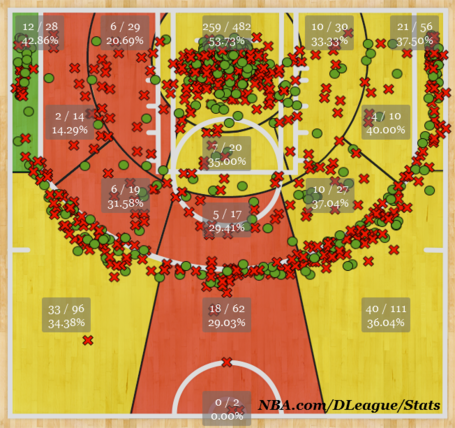 The 87ers' shot chart through 12 games

Norvel Pelle remains an intriguing prospect: The team (specifically, Baker) is extremely high on Norvel Pelle. The 6'10" forward/center was a top-10 recruit in the Class of 2011, but due to academic issues, he never set foot on a college campus.

Not surprisingly, Pelle has been wildly inconsistent this season. After missing the first six games of the year with concussion-like symptoms, Pelle has shown flashes of brilliance (18 points, six rebounds and two blocks in 23 minutes against the Idaho Stampede on December 11), but he mostly resembles a player who never played at any level above prep school.

The Sixers were high on Pelle prior to the 2013 draft, and may have used a second-round selection on him had the former St. John's recruit not withdrawn his name due to a foot issue.

Pelle was taken with the sixth overall pick in November's D-League draft, and Baker gave a glowing report on his young protege:

"He's learning how to do this at this level. It's not easy. Let's be honest... we look at his background, you know? He's been a lot of places, and I'm not sure what he learned when he was there. There's no question that he's a tremendous talent, and he's learning how to be a professional. He'll be fine."

"I would love to have been around him the whole time and know the whole story, how it all happened... and I'm sure the blame can be split into a number of different slices... but when it all comes down [to it], he's the guy that has high-level talent. And he's got to learn how to put that on the floor all of the time."

The Kendall Marshall experiment was fun while it lasted: For whatever reason (perhaps the solid play of Tony Wroten at the point in the absence of Michael Carter-Williams), the 76ers never chose to bring Marshall up north. Marshall signed with the Lakers on December 21, and many wondered why Hinkie and Co. didn't give the former North Carolina playmaker a chance to stick with the Sixers.

Quite frankly, Marshall's play didn't do much to force the issue. With the offense flowing almost entirely through him, the 6'4" Marshall did put up decent numbers at face value (19.4 PPG, 9.6 APG, 4.7 RPG). But the same issues that have plagued Marshall throughout his career - the erratic jumper (he shot 41.9 percent from the field with the 87ers), the slow release on his shot, the inability to consistently beat his man off of the dribble - made him little more than a fringe prospect. Marshall is definitely an NBA-caliber player, but there's a reason why the Washington Wizards chose to outright release him shortly after acquiring his rights back in October.

Aquille Carr has his work cut out for him: The Sixers can't call Aquille Carr up from the D-League (he's ineligible since he's never gone through the NBA draft process), and they wouldn't even if they could.

Despite his explosiveness and ability to break his man down off of the dribble, Carr simply doesn't have the mindset of a point guard, something that he'll have to play on the next level given his size (5'6", 148 pounds). He hasn't had any problem getting his shot off in the D-League - the issue is that those shots rarely go in (39.8 percent from the field, 39.1 percent from beyond the arc).

Carr figures to get more playing time with both Marshall and Mency gone, and a few months from now, he may be able to cut down on his turnovers (5.4 per 36 minutes) and evolve into something that he isn't now: a viable 2014 NBA Draft selection. When asked about Carr in an interview with the Baltimore Sun, Baker's assessment was largely positive:

Big Brother: Thanasis Antetokounmpo, older brother of the Milwaukee Bucks' Giannis, has the ability to be an end-of-the-bench contributor today, and that's exactly what he would be had he not taken his name out of the 2013 NBA Draft pool.

Thanasis is an athletic small forward who is far more talented on both ends of the floor that the average D-League player. Antetokounmpo (12.4 PPG, 4.3 RPG) is clearly the best player on the Sevens' roster right now, and I'd be shocked if he doesn't hear his name called in the second round of next June's draft.

BONUS: While he's not an official member of the Sixers, we would be remiss if we didn't provide an update on second-round pick Arsalan Kazemi. The former Oregon forward has been productive overseas, averaging 15.5 points and a league-leading 13.0 rebounds per game for Petrochimi Bandar Imam Harbour in the Iran Super League. And while it's hard to put those stats in the proper context, it appears that Kazemi has the rebounding chops to be a contributor in the NBA at some point down the road.