The 76ers have struggled to defend the three point shot. That's obvious to anybody who's watched the Sixers this season, and especially so these past two games where the Sixers surrendered 42 made three pointers. The Sixers mark of 10.5 threes given up per game is on pace to obliterate the worst mark in NBA history, which to this point was the 8.7 per game by last year's Bobcats.

#Sixers Brett Brown: 'The last two games, defensively and some other areas, we were not even close to building anything.'

One of the primary culprits of the Sixers problems defending the perimeter has been Evan Turner.

I went back and took a look at all the three point attempts that Sixers opponents have taken. This is where Turner really begins to separate himself from the pack, in a bad way. Below is a table with data from the people on the team who have given up the most three's.

The ranking for Sixers perimeter players in terms of overall defense isn't much better for Turner. Here are the worst Sixers defenders as determined by points per possession given up, with a minimum of 100 possessions defended. These numbers are courtesy of MySynergySports.

Obviously, there are some team personnel (and perhaps defensive philosophy) issues to take into account here, but Evan Turner's teammates are playing with the same flawed personnel and philosophy, and Turner has been by far the worst in both of these by a large margin.

Over-helping, slow rotations, and entirely too much complaining to officials have all been huge contributing factors in Evan's wretched defensive play.

I tried to find examples not due to scheme nor being physically beat, but instead mental lapses that have become ever-so-frequent for Turner on the defensive end. Believe me when I tell you that I had no shortage of clips to pick from.

This play starts off with Wroten and Young defending an Andre Miller and Kenneth Faried pick and roll. In theory, this pick and roll tandem should be relatively easy to defend, as neither Miller nor Faried are big threats to score from the perimeter off pick and rolls. Deny Faried the ability to roll to the basket and hold them up long enough for Young to recover back to Randolph. 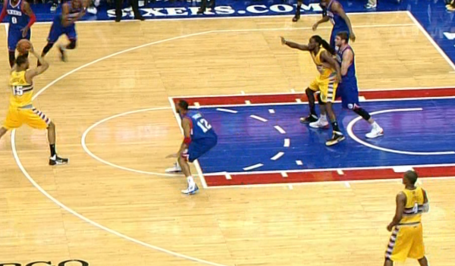 Everything is going according to plan here. Wroten and Young hard trap Miller, getting the ball out of his hands and removing him as a threat to score. Faried predictably rolls to the basket, and Spencer rotates over nicely to meet him and prevent the easy score off of the dive. This leaves Andre Miller with Anthony Randolph as an outlet valve, and Randolph is a virtual non-threat from the three point range he now finds himself in -- 4 threes in his career.

But Evan over-helps, leaving Randy Foye (the much bigger threat) alone in the corner to challenge Randolph at the perimeter. Turner did need to have his head on a swivel and be ready to cut off Randolph's driving lane in case he took the ball to the hoop before Young could recover, but jumping out to challenge Randolph's perimeter shot was unnecessary, and Hawes would be incapable of rotating over should Randolph kick it over to the now wide open corner. Foye is a career 37.5% three point shooter and a very good catch and shoot player. This is a case of knowing your personnel. 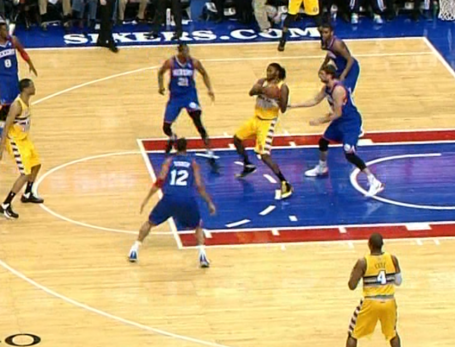 Instead of kicking it over to the open Foye, Randolph goes back down low to Faried. Seems like the Sixers dodged a bullet there.

The Sixers then predictably collapse on Faried, who isn't all that much of a threat to score that far away from the hoop with his back to the basket. With 4 defenders collapsing on Faried, he has his choice of two wide open shooters setup in the corners. This part I blame on Brett Brown's scheme more than Evan Turner, but Turner's second major mistake is yet to come. 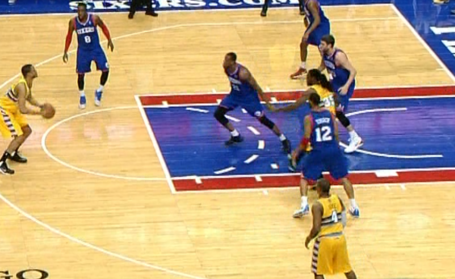 Faried kicks it back out to Randolph, a non-threat from that distance. Two bullets dodged in one possession.

Except Evan Turner remains focused on Faried, who is still well defended by Hawes and not much of a threat anyway. 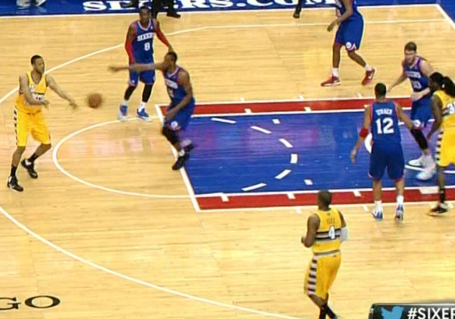 At this point, Turner has all but forgotten his man exists. He's still pinched down on Faried, who gave it up seconds ago, and not even in a defensive stance. He's doing nothing but floating on defense, watching neither the ball nor his man and not noticing that Randolph is passing the ball to the man he's supposed to be defending. 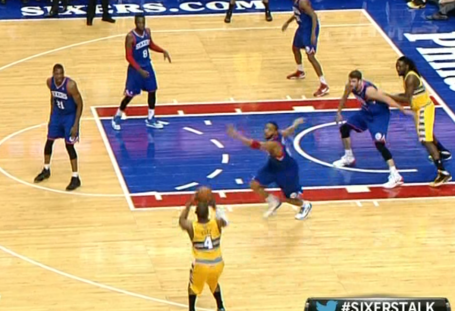 Evan finally realizes what's going on and makes a flailing attempt to get back into the play, but never comes close to recovering and challenging the shot. Foye makes the three.

Watch the play develop in real time below.

This next play is against the Nets, with the Sixers struggling to pick up their men in transition. I began to try to diagram out this play, but there were so many mistakes on the part of the Sixers defenders that it became a convoluted mess. Overall, the Sixers are one of the worst teams at defending the break.

As the Nets are coming down, Evan initially decides to pick up Kevin Garnett, with Turner's man first sprinting down to the corner, then running baseline. Hawes, right behind him, picks Garnett up pretty much immediately after this. Turner then begins to ball watch. After a few seconds of that, he makes a half-hearted attempt to locate his man, then stands in the lane and does nothing more than ball watch until a feeble contest on Deron Williams' open three.

The amazing thing about this one is how little effort Turner made to locate his man, or any man for that matter. After his initial attempt to slow Garnett down, Turner made no attempt to move from the painted area until it was far too late.

This next one was my favorite. After the Nets game, Brett Brown had the following to say:

"We cry too much to refs looking for fouls, and we don't get back. We whine a lot right now. We have to get over that."

Who could he have been talking about?

An argument commonly made is that the absence of Michael Carter-Williams has been a big part of Evan Turner's recent struggles. Whether or not this is true factors into the Evan Turner equation: If you believe that it was MCW elevating Turner's play to start the season, then there's hope that Turner could be valuable as a future piece to the puzzle.

Turner has seen his scoring average increase slightly when Carter-Williams has been off the court, which makes sense as his usage rate would have increased, but his efficiency drops somewhat and he gets to the line less. Cut and dry: Turner is better with MCW on the floor.

However, if you go back and look at 'Good Evan', this wasn't necessarily the case. Here are Turner's numbers over the first 10 games of the season with and without Michael Carter-Williams.

Since this is the player that we hope we have long term, it was surprising how much success Turner had to start the season without Michael Carter-Williams on the floor. Turner scored significantly more when Carter-Williams was on the bench, getting to the line more and mostly retaining his efficiency.

Spencer Hawes has been the biggest catalyst in Turner's efficiency, and that still holds true nearly a third of the way through the season. Turner is scoring slightly more when Hawes is on the court (28.2 points/48 minutes with Hawes, 26.2 without), but he has been vastly more efficient with Hawes on the court with him (57.7% true shooting) than with Hawes on the bench (45.5%).

What's the point of the exercise? It's really about sample size. Turner started off extremely hot and he's struggled of late. This leads to two questions:

1) Was Evan Turner's hot start to the season due to Michael Carter-Williams?

2) Has Evan Turner's recent struggles been because Michael Carter-Williams has been largely unavailable due to injury?

With Turner putting up impressive numbers to start the season both when MCW was on the court and when he wasn't, it may be simply that Turner was due that regression to the mean we all expected, and that just happened to coincide with Michael Carter-Williams' absence. Ultimately, we need more data to truly determine whether Michael Carter-Williams could propel Evan Turner into an efficient offensive player.