Brett Brown is considering starting Carter-Williams and Tony Wroten in the backcourt together. Fun? Sure. Smart? Eh.

Share All sharing options for: Tony Wroten and Michael Carter-Williams Backcourt of Fun

While Michael Carter-Williams has spent the past seven games healing his (formerly) infected knee, Tony Wroten has stepped into the starting lineup and performed admirably. Prior to the contest against Brooklyn, Wroten's averaged 18.9 points and 5.5 assists a night in place of the Syracuse rookie.

We're led to believe that Carter-Williams will return, eventually, and when he does there will certainly be a change to the lineup. Although moving Tony Wroten to the starting two guard role wasn't something thought about outside the organization, head coach Brett Brown is leaning towards the idea.

Keith Pompey of Philly.com wrote about a possible pairing of what's left of Team WHOP:

"He said we need to figure out how we are going to do playing together, because that's what he wants to do," said Wroten, who started the last six games in place of Carter-Williams. "He wasn't saying that we are both going to start. He was just saying [to] keep that in mind and talk it over."

Both players have proved to be game changers when they're on the court. The holdup is that they both need the ball in their hands. Wroten would have to slide over to shooting guard, and at this stage, he hasn't been as productive without the ball. Wroten thinks he can make the switch. "I played [shooting guard] in college," said Wroten, who averaged 16 points, 5.0 rebounds, and 3.6 assists in his lone season at Washington. "We had a good point guard in Abdul Gaddy. So I switched over to a two-guard."

Yes, the same Tony Wroten who shot 16% from long distance his only year at Washington. 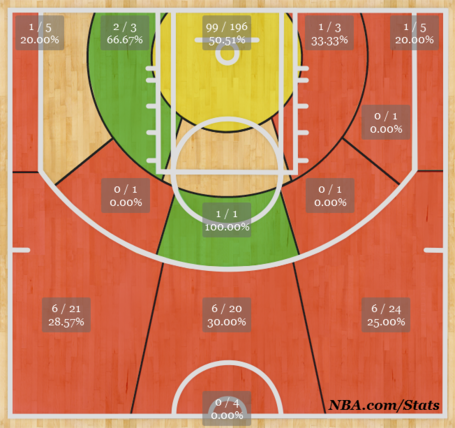 He is lovable in every single way, but I'll be damned if he actually takes a mid-range jumper. This makes Wroten look like an untrained puppy who gets zapped every time he takes a step in from the three point line because there's an invisible fence there.

As Pompey noted, both need the ball in their hands to create offensive opportunities for themselves. The two simply are not compatible, further proven by their advanced metrics when the two play together. The sample size is limited (just 110 minutes), but Carter-Williams most notably plays better when Wroten is on the bench.

In theory, it's a nice idea to put the team's two most explosive players together, but the fancy numbers say nay.

It would be best for the Sixers to re-insert James Anderson into the lineup, a true two guard and put Wroten as the backup point guard. Unlike Wroten, Anderson's outside shot will demand a little respect from defenders, taking some pressure off Carter-Williams.

WHOP stands for 'We handle our problems'. If that's the case, Brett Brown should allow them to do that. Separately, of course.