It's been a few minutes since we dropped an EFF DOUG COLLINS joint so here we are.

The Sixers may be plummeting to the bottom, but compared to the last ten years of plodding, inefficient dreck, this Brett Brown team is a light to us in dark places when all other lights have gone out.^ The pace is incredible, the players are wildly entertaining in their own magical ways (BRANDON DAVIES ALERT), and the offense is predicated upon efficiency, even though the talent isn't yet there.

After wailing to the heavens for years about long two's (along with free throw inadequacy and more), Doug Collins is dead and gone and no one is watching his videos with Grantland where he talks to Bill Simmons about fake trades please god don't watch it. We've got Brett Brown and Sam Hinkie. Life is good. 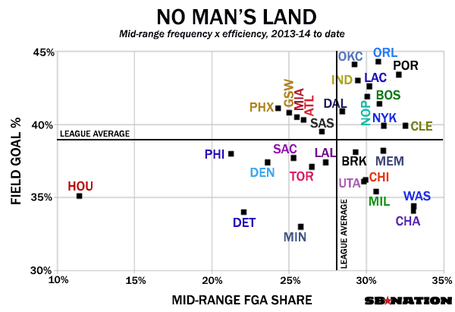 From the excellent Tom Ziller's excellent column on DEATH by mid-range jumpers:

Last season, Philadelphia was No. 1 in mid-range shots per game. In 2011-12, the Sixers were No. 2 in that category. Now only the Rockets take fewer mid-range shots. What changed, other than Jrue Holiday being replaced with Michael Carter-Williams and Tony Wroten? Well, Houston's front office No. 2 Sam Hinkie took over the Sixers and hired a like-minded coach to run the team.

The distaste of mid-range shots is a paper thing — plenty of theoretical arguments for the mid-range jumper have been made, but the math is unconvinced. Analysts like to believe that having good mid-range shooters opens the floor to slashers and post players, that taking long jumpers keeps the floor balanced and protects against doubling or packing the paint. It makes sense, but the math keeps telling us that mid-range shots don't add enough to make up for the fact that they are inefficient shots compared to other options.

Houston GM Daryl Morey and Philly's Hinkie are the most visible heavy-math GMs in the league. Their teams are at the bottom of the list in mid-range shot frequency. That's not a coincidence. It's not the only thing that matters, of course — the Rockets are No. 3 in offense, the Sixers No. 26. But at this point, it would seem plenty of teams could benefit from taking the analytic approach here and relying less on the mid-range.

Spencer Hawes is stepping back and taking threes. James Anderson, Hollis Thompson, even Evan Turner, MCW, and Wroten, even though they're pretty bad at them. Thaddeus Young too, and that's helping him become a much more complete player. And he's shooting 35.7% from deep! Nobody pay attention to the Lavoy Allen in the corner.

Well, that's swell. And I hope it did for a nice break in your TRADE PANIC mentality. Back to your regularly-scheduled programming.

^Got a majorly great deal on the LOTR trilogy on Blu-Ray so you'll just have to get used to more frequent references.