Let's talk about everyone's favorite (or least favorite, but nothing in between) prospect.

Share All sharing options for: The “In Lieu of Jrue” NBA Draft Prospect Watch, Part Five: The Andrew Wiggins Edition

First, in the interest of full disclosure: If I could select any current college basketball player to wear a Sixers uniform for the next decade and a half, I'm choosing Andrew Wiggins with very little trepidation.

It admittedly doesn't matter all that much, even after moving past the initial obvious reasons such as the fact that I'm not Sam Hinkie (but actually, we are all Hinkie). No matter whom they belong to, hard-line opinions on potential 2014 NBA Draft prospects become significantly more important in, you know, 2014. As far as this topic is concerned, I'm certainly part of Team Chill.

With a 24-hour news cycle and social media influencing how sports are discussed, much of the basketball-watching public has already offered a strong opinion on Andrew Wiggins. At the quarter pole of the college basketball season, the hyper-athletic, super-skinny Canadian teenager is the most polarizing basketball prospect in recent memory.

Much of that reaction has been negative simply because so much of his press before the season was so positive. Hyped beyond belief - I mean, the preseason Sports Illustratedcover almost had religious overtones- anything short of perfection was going to be considered a disappointment.

Wiggins hasn't been perfect in his first nine collegiate games, three of which Kansas lost. He's not as surefire an NBA prospect as LeBron James, the last high school player that received this much hype. Now that has been established, and it theoretically should be easier to view Wiggins through the prism of "Should he be the top pick if (when) he declares for June's draft?"

In a loaded freshman class, Wiggins' competition for the top spot could possibly come from a few different players. The one currently playing at the highest level in college is Duke's Jabari Parker, and the narrative surrounding those two has been one of potential versus production. I'm not sure that's completely fair.

For example, Wiggins' true shooting percentage (60.1%) is only a couple of ticks below Parker's (62.5%). Also, Wiggins' team has performed better offensively with him on the floor than Parker's more experienced Duke teams with their star freshman in the lineup.

Parker has been almost universally hailed, and rightfully so. He's played great and is a terrific pro prospect. The comparison was only made to point out that Wiggins certainly hasn't produced as well, especially after factoring in his strong defense on the wing.

Late in last night's Kansas-Florida game, ESPN's cameras panned to some of the NBA front office types in attendance. Hinkie was present, and he was treated to the full Wiggins experience: On one side of the ledger, an apathetic first-half performance and four turnovers. On the other, breathtaking athleticism and a late three-point barrage that almost improbably brought the Jayhawks back from the dead. 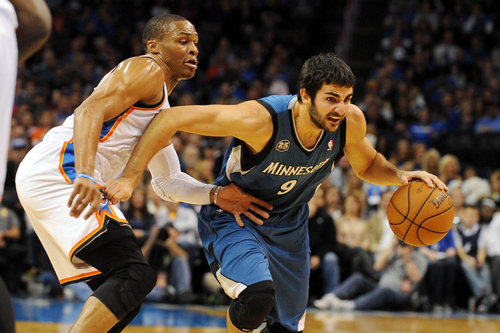 The Pelicans pick could be used for some of these under-the-radar guys.

Early in the season, Wiggins has often performed similar to a tactical boxer in the first couple rounds of a big fight. This Floyd Mayweather routine does Kansas a disservice at times. Ideally, a player with his immense talent should consistently make an impact, one way or another.

At this point of his development, Wiggins' two main weaknesses seem to be ball-handling and passing. Or if you combine the two ideas, playmaking. Bill Self has utilized Wiggins, whose assist rate is much lower than that of Parker, Randle and even teammate Joel Embiid, mainly as a finisher.

The problem isn't necessarily that Wiggins doesn't possess advanced dribble moves, even though that's probably true to some extent (more confidence in driving left wouldn't hurt, either). At the very least though, he seems to lack confidence in utilizing them in game situations. Primarily a straight-line driver, the majority of Wiggins' offensive moves contain only one or two dribbles. Also, passing doesn't come very naturally to him to say the least.

All that said, Wiggins has been efficient as a scorer thus far. It's still only a small sample, but it seems like he's been undersold as a three-point shooter. When Wiggins has time to get his feet set, his form looks impressive all the way out to the NBA three-point line, as we saw in Gainesville last night.

At times, Wiggins' balance has gotten messed up on jumpers off the dribble, but that feels like something he can improve with repetition. He's still capable of a moment of brilliance like the step-back jumper he knocked down in crunch time against Duke.

Wiggins has excellent body control on drives, but sometimes in transition he moves too fast, resulting in out of control layups. He struggles a decent bit finishing with contact in the lane, but I suspect that will improve as his body develops. Earlier this season, Wiggins showed a nice array of floaters in a win against Towson.

Defensively, Wiggins has huge potential, especially because he can still get a lot stronger. Plus he's already really good on that end of the floor. Using his great length, Wiggins' aggressive defense has routinely forced his man to initiate offense well outside of the three-point line at Kansas.

Another reason why some are down on Wiggins has to with the draft lottery system, and how NBA franchises go about building their teams with it in mind. Needless to say, some people don't like the idea of taking a couple steps back in hopes of making a giant leap forward. Wiggins was viewed as the symbol for why teams would want to rebuild, so he's going to naturally be evaluated harshly. IF IT'S NOT LEBRON, WHAT ARE WE DOING?

Truthfully, this year was always about more than just one player. The fact that so many think that Wiggins - A 6-foot-8 18-year old that has so much potential for growth and is still averaging an efficient 16 points and 6 rebounds - isn't the consensus number one overall pick speaks to the depth of the overall class.

Hinkie constantly talks about "making the right decision." From the position that the Sixers were in last summer, he deemed the draft as the best possible way to upgrade the team's talent with the goal of eventually realistically contending for a championship in mind.

Andrew Wiggins was only part of that decision. To properly evaluate him, we need to constantly remind ourselves of that.