Sixers vs. Cavs Preview: Tony Wroten Looks to Bring the Magic to Cleveland

The Sixers travel to Cleveland to take on the Cavaliers in the back end of a home and home.

Share All sharing options for: Sixers vs. Cavs Preview: Tony Wroten Looks to Bring the Magic to Cleveland

For days leading up to the Sixers first matchup against the Cavaliers, all discussion revolved around Andrew Bynum's return to Philadelphia donning a different uniform. For Philadelphia, he donned a suit for 82 games. For Cleveland, he actually sported a number 21 jersey.

So when the (technically) former Sixers center stepped on the floor for the first time, he was met with a thunderous amount of boos. It was in essence, the official end to what was a tumultuous period in Sixers history, and the start of a new chapter: the Tony Wroten era. 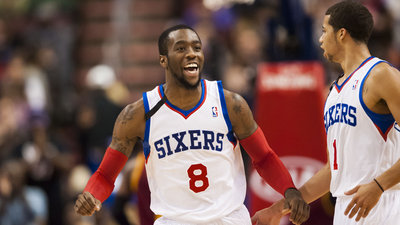 While the Sixers will certainly look to win the second of back to back games on Saturday evening, history says it is rather unlikely they'll emerge from Cleveland victorious. In 2012, Philadelphia posted a record of 3-17 in the second half of back to back contests, a stat that doesn't bode well for their chances tonight. But these aren't your slightly older cousin's Sixers of last year.

To add injury to an insulting beat down for Cleveland, they're likely to be without top pick Anthony Bennett, who reportedly suffered a shoulder sprain while going for a lose ball. Bennett's start to his career has been down right Kwame-like. The 2013 top pick is averaging 1.0 PPG in five games played, and has shot the ball better from three (.091%) than from inside the arc, where he has missed every single shot he's taken. That's almost impressive. Almost.

Philadelphia is likely to have some reinforcements, as Daniel Orton is expected to return to action after sitting out Friday night with right knee soreness.