Been waiting years to say that one.

We wanted this one. In Andrew Bynum's return to Philadelphia, Tony Wroten and company led a cacophony of boos and raggedy-fun Sixers to a near-dominant victory over the Cleveland Cavaliers 94-79. Most impressively, the Sixers interior defense was absolutely impenetrable tonight. Tristan Thompson led the Cavs with 9 of their 17 offensive boards, but Kyrie Irving could do absolutely nothing against Spencer Hawes and Thaddeus Young, who combined for 8 blocks, some of them completely DIRTY.

I'm getting ahead of myself. The Sixers won again! In really fun fashion! They were working through a hangover in the first quarter, everyone but Brandon Davies having been drunk on fireball shots from last night. Once they sobered up, they outscored the Cavs by 30 over the next two quarters. Cleveland couldn't do anything. Kyrie looked horrible (4-17). Big ups to the Sixers defense for finally holding a team under 100 -- their first time this season.

As I laid out in the post-game thread, the Sixers were paced by incredibly fun performances by Evan Turner and Tony Wroten. Tony. Wroten. He has to be everyone's favorite player in the league at this point. He hits one three and it's Heat Check Time. It's just an unconscious amount of fun, especially when he also does things like cut apart a defense and throw down. He notched a career-high 18. He is the best. 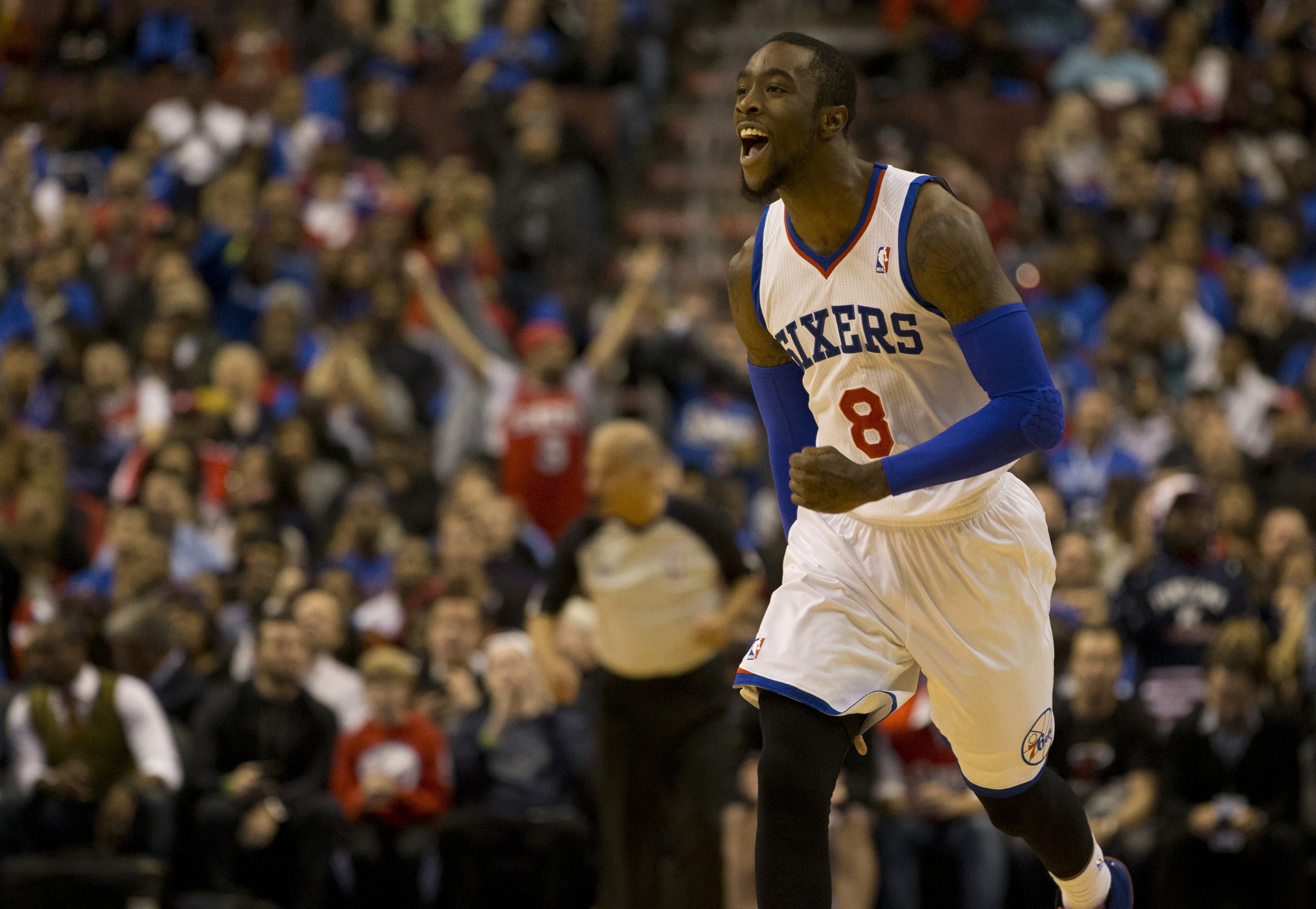 I just wanted to post another picture of Tony.

And Evan is just feeling it. The Villain has scored 18+ in each of his six games, shooting over 50% in all but one. He is playing tremendous offensive basketball. Going to the basket, pulling up in his spots, and using his teammates enough that he's not getting embarrassed by defenders too often. He still has a few of those OH GOD EVAN WHY plays -- like when he got obviously stuffed by Earl Clark on a stepback -- but the Kid is just playing great basketball. He's an All-Star, you guys.

Reiterating the excellent games from Thad and Spencer inside. Both guys are really playing within themselves, even though this is the first game they've made any real difference on the other end. So much fun to watch Spencer do things. And Thad hustled his ass off on a number of occasions. I would wax about these two for months if I hadn't already spilled my guts on Our Nation's Hero: Tony Wroten.

Noticing that the Sixers share the ball really, really well when they want to. They made the extra pass a dozen times tonight. They made the extra extra pass a few more. When they don't play as a team, they suck pretty hard. Moving the ball around to find shooters and cutters gets them great looks. Such a marked improvement from Doug Collins. And on Andrew Bynum Night no less.

-- Big ups to James Anderson, who continues to do things on the court. He shot well tonight (5-7 with a three), but he's been big on the glass and the perimeter passing as well. He's so interesting-looking too, which helps.

-- Anthony Bennett got hurt doing something with Lavoy Allen nearby. That's a bummer, because as you know, I'm a big Bennett supporter.

-- Lavoy played like assturds tonight, but at least after the first half, the dude looked like he was giving some effort. He got stuffed easily by Bynum once or twice. And he let him score quite easily. But he did beat him downcourt once for a quick bucket. So in the battle of broken, disinterested big men, Bynum and Lavoy tie.

-- The box score tells me Sergey Karasev played but I remember none of that. Tanner must've laced this beer with PCP.

-- Anderson Varejao looked bad. I've never liked him. He got outworked by everybody on the Sixers tonight.

-- Michael Carter-Williams played okay defense on Kyrie, forcing him into help, but still got beat by him a bunch. And he didn't have the best offensive game, but he still hit a few nice buckets and made some really crisp passes that were occasionally finished. Lavoy blew a couple. If this is a Bad MCW game, I'm good with it.

-- Boston beat Orlando! Washington beat Brooklyn! One of Denver or Phoenix will win!

The two teams will carpool back to Cleveland tonight to face off against each other tomorrow at Quicken Loans. Can't imagine Kyrie will play this bad at home. Remember: