The Dreadful Armada: Why Are So Many Bad Teams Winning?

The Dreadful Armada, which had a one-off appearance this summer featuring "tanking rankings" before they were cool, returns as a weekly series looking at the losers of the NBA. This week: finding reasons behind the strong starts for a trio of prospective tankers.

Share All sharing options for: The Dreadful Armada: Why Are So Many Bad Teams Winning?

The Sixers traded their starting point guard, obtaining nothing in immediate return and sending themselves directly to the bottom of the league in the eyes of most fans and observers. Their biggest free agent signing involved Darius Morris, and it did not involve cutting Darius Morris to make room for a free agent.

The Suns made two major trades during the summer, obtaining their "point guard of the future" in Eric Bledsoe in one deal and a first round pick (and Gerald Green's contract and potential that only I still think is there) for Luis Scola. They figured to be the worst team in the West, though with Bledsoe, Goran Dragic, and Marcin Gortat they figured to have the makings of a semi-competitive team. So of course, they dumped Gortat four days before the year began for a first round pick and the rights to buyout Emeka Okafor, jumping headlong into a competition with the Sixers for the prospective worst record.

And the Orlando Magic didn't want to be left out of the competition! They finished last season with the worst record in the league, and they looked absolutely dreadful down the stretch (though not badly enough to lose to the Sixers even once in two tries!). They drafted the very promising Victor Oladipo second overall, but aside from that did little else. Signing Darius Morris as your big move sounds bad enough, but signing Jason Maxiell to a decent-sized contract and making him your opening night starter sounds even worse.

The Sixers, Suns, and Magic were the three teams I pegged to be the worst during the summer. None had aspirations to be good, and the front offices of each team actually planned against success.

So of course, as fate would have it, each team started off with identical 3-2 records. The Sixers were the highest profile winner, upsetting Miami and Chicago in the process of a 3-0 start. But the other teams have marquee wins as well. Orlando held the high-wire act Clippers to just 90 points last night in a victory, and Phoenix beat a couple of solid Western Conference teams in Portland and New Orleans while also pushing the Spurs to the limit on the road.

If I told you that these starts were a mirage, then I would be telling you something you already know. You would be reading this for no reason (thanks, by the way). But the reasons behind the winning are fairly simple - small sample size theater, and most of the wins came at home. 7 of the 9 wins came at home, to be precise.

In Lieu Of Jrue Debuts 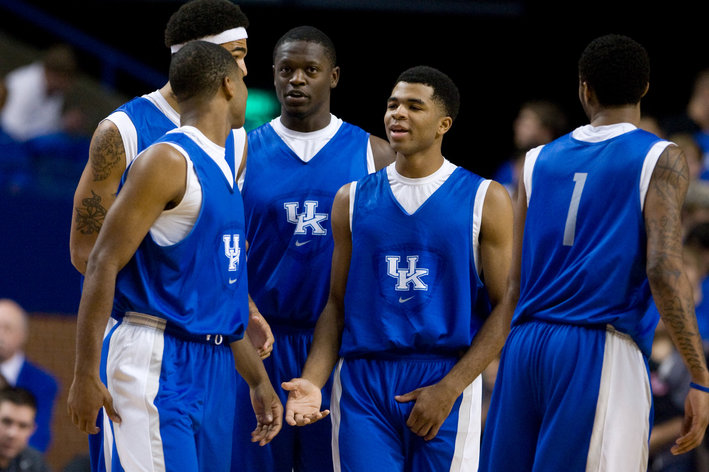 The excellent Rich Hofmann leads our draft coverage, with the first installment of his weekly draft watch focusing on the upcoming The Champions Classic

Only the Sixers road win over an injured Wizards team and the Suns victory in New Orleans occurred on the road. The other 7, over good and bad teams alike, happened on home courts. And even bad teams win games at home. Orlando was the only team not to win at least a third of their home games last season. Just 8 finished with home records under .500 in 2012-13.

Stranger things have happened than bad teams winning games at home, especially bad teams who are also young. The Sixers have given that advantage back over the last two home games with significant double digit losses, which bodes well for their dismal future. Regression rocked the Sixers like a hurricane, or at least like a steady stream of raining threes. Teams that lose so badly at home are rarely any good in the long run.

It's likely that the Magic and Suns will eventually experience the same regression, but there's reasons for hope that those teams will continue to perform above expectations for the near future. Nikola Vucevic appears to have taken another strong step forward in his development, improving his weak defense and becoming a more assertive offensive player. And an unleashed Eric Bledsoe has been really bad news for Phoenix opponents so far. And both have players who've been injured and should return soon, in Goran Dragic and Tobias Harris.

They will fall off in time, just as the Sixers already have, and all three teams should eventually catch up to the already tanking-strong Jazz and Celtics (and the strangely awful Nuggets, who deserve a special shout-out). As the season wears on, young teams get tired and struggle without much practice time. More players get injuries, and more bad players receive more bad playing time. Teams move players for future assets, placing greater burdens on players not prepared for extra responsibilities.

Teams right now are just playing basketball, and the tanks are mostly being kept in storage. It'll be a while before the real efforts begin, but when it does, moments like the Sixers victory over the Heat will be just a distant memory. But for fans of all three, the wins should be fun while they last.