The "In Lieu of Jrue" NBA Draft Prospect Watch, Part One

As the college basketball season approaches, we look at the biggest event on the calendar, at least from an NBA point of view.

Share All sharing options for: The "In Lieu of Jrue" NBA Draft Prospect Watch, Part One

After a week of inspired play, Brett Brown and his Philadelphia 76ers have not only won America's hearts. They've also plummeted from the catbird seat of the various "Tanking Rankings" scattered across the Internet.

Even though the Sixers' successful start has threatened to make almost every preseason prognostication laughably wrong, it still remains to be seen exactly what they are as a basketball team. On one hand, wins over title contenders like the Heat and Bulls are certainly impressive, as is the fact that they're getting to the rim with regularity.

Conversely, the Warriors took the Sixers to the woodshed on Monday in remarkably easy fashion. Couple that performance with the sneaking suspicion that key members of the team got off to an unsustainably* hot start from the field, and the notion that the Sixers aren't very good seems realistic again. At the very least, it's back in play.

*I mean, did you see Joakim Noah running at Spencer Hawes behind the arc like he was Stephen Curry? An absolutely glorious sight, but I'm pretty sure Hawes won't keep sniping at such a high rate.

So with a little trepidation, an acknowledgment of the Sixers' high-level play thus far, I submit the first installment of the loss-dependent prospect watch, entitled "In Lieu of Jrue."

The Case for Tanking: Jabari Parker 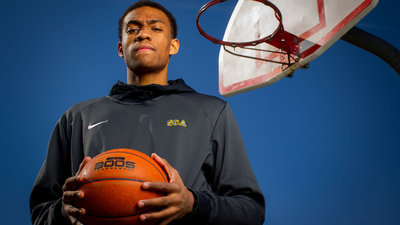 Roy carries the torch for the Duke freshman.

We're officially only two days away from the start of what is shaping up to be a super-intriguing college basketball season, especially from an NBA Draft perspective. As this will be the only post that won't have any college games from the previous week to review, I suspect it will be far less detailed than the rest of the series, but part of the series it is.

There's one major thing on my mind this week: The Champions Classic, our first and maybe best look at the vaunted freshman class.

Yes, all four teams involved — Kansas, Kentucky, Michigan State, and Duke — will play tune-ups over the weekend certainly worth checking out. And yes, the AAU circuit, increase of televised high school basketball, and postseason all-star circuit have already provided scouts with the chance to thoroughly pick apart this heralded group of freshmen.

But next Tuesday, the United Center in Chicago is where, to be blunt, shit gets real. Whatever you think about college basketball, it's the closest thing to the NBA that these talented freshmen (or "diaper dandies," if you really want to get your college on) will experience before, you know, actually playing in the NBA. Often, they'll face the challenge of being matched against players that are two or three years older than them. Also, in many ways the college game is decidedly more physical than the NBA. For a one-and-done recruit, it's sort of like getting struck with a paddle by Fred O'Bannion, except you're allowed to dunk on him in retaliation.

There is almost assuredly going to be more talent at these two games than at the Final Four, unless these teams also happen to comprise the Final Four. Before going any further into detail about the matchups, here is a list of the names worth paying attention to. I approximated where mock drafters are currently projecting each player will be selected next June.

The Case for Tanking: Julius Randle 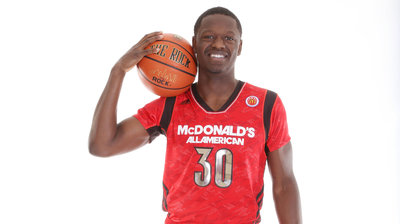 On the meanest of the top draft prospects.

Duke: Jabari Parker (Top 7), Rasheed Sulaimon (Early second), Rodney Hood (Early second, though his stock is all over the place)

And that's even before we get to guys like Marcus Lee. By my count, 15 players that currently look to have a realistic shot of cracking next June's first round will be in the building on Tuesday.

If you make plans to watch one college basketball-related event all year, make it these two games. If you're away from a television on Tuesday for whatever reason, make sure that you spare no "X Factor" or "The Voice" in DVRing them (just kidding, "The X Factor" airs on Wednesdays and Thursdays). Half of the whole first round could potentially be on display.

Think of the Champions Classic as a first impression of sorts for the nine freshmen listed above. Take Wiggins for example. Sure, I've seen him play in the McDonald's game and the Nike Hoop Summit. I've also salivated over his fine work on YouTube, where in his senior year mixtape, Wiggins reenacts Scott Howard's first game as Teen Wolf over an entire season.

Playing against Duke on national television is different, though. It's a new challenge for Wiggins, a major step up in degree of difficulty. The great unknown of how exactly these players handle the spotlight is part of what makes these two games so intriguing.

As the season goes along, we'll supplement traditional scouting in this space with numbers. These numbers will describe all different types of things, like what type of pace a point guard is running his team at, how well a wing is defending isolations, or even something simple like how many blocks that a center averages per game.

Of course, the season actually has to start before we can start to compare players' video or stats. Randle's defensive rebounding percentage and Parker's PER from when they were dominating the high school ranks are both probably epic, but they're neither readily available nor really of any concern.

Two days away, we can only look ahead in anticipation as the ultra-hyped freshman class prepares to finally play college basketball. Until then, here are five storylines to watch at Tuesday's Champions Classic:

1. Andrew Wiggins vs. Jabari Parker. When Jabari Parker was featured on the cover of Sports Illustrated in May 2012, he was billed as "The best high school basketball player since LeBron James." A couple months later, Wiggins reclassified into the Class of 2013, ensuring that Parker wasn't even considered the best player in his own class. Needless to say, not a good look for SI.

The Case for Tanking: Andrew Wiggins 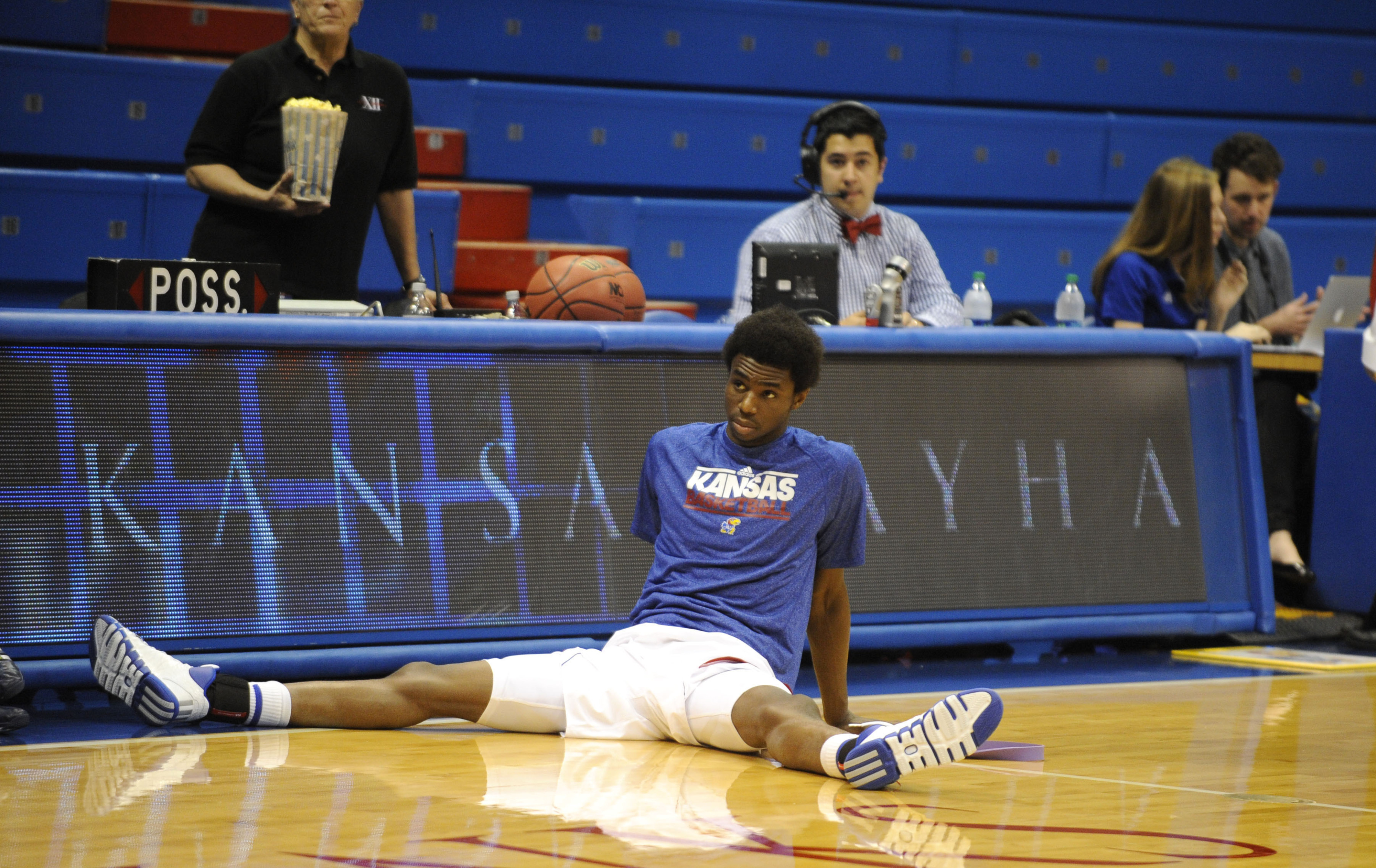 And of course, the top prize.

On the court, both players are long wings with slightly different skillsets. While Parker has the reputation of possessing a polished offensive repertoire, Wiggins' calling card is his electrifying athleticism. I hope they both play the entire game and guard each other the whole time.

2. How does Kentucky share the ball? With a recruiting class that includes a record six McDonald's All-Americans and was favorably compared to the Fab Five, Kentucky is absolutely loaded. But are they too loaded?

Just two years ago, John Calipari brought in a similarly talented freshman class and rode them to a national title. The potential major difference between that group and this one is that its two best players, Anthony Davis and Michael Kidd-Gilchrist, thrived off the ball and fit in perfectly as parts of a balanced offense. I'm curious to see if Randle and the Harrison twins can do the same.

3. The two sleepers. Wayne Selden and James Young are each the third-highest rated prospects on their respective teams, but both of them have been getting a lot of preseason buzz.

4. Oh yeah, Michigan State is involved, too. The Spartans don't score very highly in the unknown department. Their two major NBA prospects, Harris and Payne, are a sophomore and a senior. Tom Izzo is Tom Izzo. What Michigan State brings to the table is a well-schooled, physical team that could give Kentucky's young players a rude welcome to the college game. They're exactly the type of competition you want to see untested freshmen faced with.

5. Bad Timing? I can't help but wonder if these showcase games are a little bit too early in the college basketball calendar. In last year's opener, Alen Len clearly got the better of Nerlens Noel, but by midseason, Noel was improving and Len was going through an up-and-down year. Wouldn't it benefit everyone involved if the teams got a month's worth of games under their belt before such a marquee event?