Sixers-Bulls Recap: Everything's Coming Up Sixers in a 107-104 Victory Over Chicago

Trying to make sense of the team's awesome start while recapping the team's third consecutive victory, this time over the Chicago Bulls.

Share All sharing options for: Sixers-Bulls Recap: Everything's Coming Up Sixers in a 107-104 Victory Over Chicago

Man, it feels good to be wrong.

Michael Carter-Williams, someone that I did not rank in my top 15 draft prospects over the summer, handily outplayed former MVP Derrick Rose (who admittedly is still hobbled, but it's Derrick freaking Rose). Evan Turner andSpencer Hawes looked like cornerstones to a pretty decent NBA offense rather than long-two-launching black holes I thought them to be. And Thaddeus Young just did what he always does, just with more distance that I didn't know for sure was a good thing.

Combine all of those, along with a not-entirely-together-yet Chicago Bulls team, and the Philadelphia Tank Commanders are a once inexplicable 3-0 on the season with victories over two Eastern Conference favorites and a road victory over an oft-projected playoff team. The Sixers defeated the Bulls 107-104 in another thriller on Saturday, if you somehow didn't already know this.

You've actually probably seen the highlights of the game. The team's unexpected start is too big of a story to miss them, and you're probably too geeked out to not devour all the game coverage your brain can handle today.

MCW driving into the lane on a secondary break, extending his arms over Rose's outstretched arms for a banked layup he had no business making. Tony Wroten recklessly going one-on-four because that's what he does, but making it work by drawing all the attention, resulting in a put-back layup. The MCW behind-the-back pass in the waning seconds of a close game to Hawes, standing 24 feet from the rim, pump-faking Joakim Noah into the air and hitting an easy shot from the foul line to extend the Sixers lead late.

You probably can visualize these plays as I write this if you've seen them already. You feel joy and happiness and giddy and, like, those really are the Sixers. The team thought to be the worst in the league is one of the most exciting and, to this point, one of the most successful.

They also probably make you feel better about the win even when it might not be in the team's best interest. But seeing the team play well brings joy to the fans, and furthermore, it shows that maybe we have something in place to work with already. Losing was only a side effect of the stated plan: player development, and so far, so good on that front.

But maybe we were wrong about the talent in place. I was certainly wrong about MCW, as it stands.

Carter-Williams looks like a gem. His passing, always his calling card, was again spot on for most of the game. Like I described with the final Sixers offensive play above, he can execute difficult passes without much worry. I felt confident enough he'd be a good NBA distributor - but his shooting and defense are light years ahead of where I imagined they'd be. The hard work put in by MCW and the coaches looks to be paying off.

Sam Hinkie stressed culture from the moment he opened up to the media following his pre-draft hibernation. He stressed hard work. He wanted players who would work together to make something special happen. He wanted competition, a dog-eat-dog mentality, an environment where only the strong survive. This conflicted with the more popular viewpoint that the team was built to lose, that they'd ensure a high draft pick next summer by losing as many games as possible.

While losing may still be the unstated goal, and while that may very well still happen, the hard work emphasized throughout the summer is paying off in victories to start the season and very promising player developments. Evan Turner and Spencer Hawes seem to have much more promising NBA futures and trade value than once thought. And MCW, in a still very small sample, looks like a keeper.

Don't Be Angry Over Sixers Victories 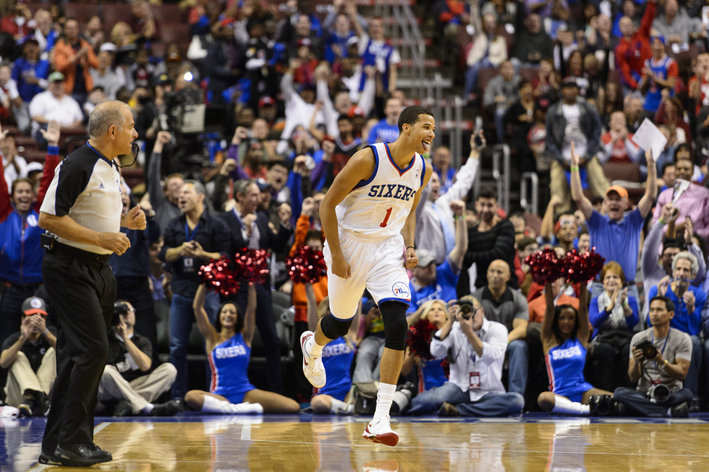 While losing has it's merits, don't begrudge those happy with seeing the team win.

There's something to be said about coaching philosophies in the NBA, too. While many decry the league as being star- and talent-driven, NBA champions rarely seem to have overmatched or inept coaches leading the way. At the very least, your coach has to embrace philosophies which don't actively hurt the teams they are coaching.

Which is to say, it's nice having a coach (along with a general manager, of course, one we've talked to and about extensively) who knows how to put his players in position to perform well. Brett Brown appears to be that kind of coach, at least judging on this three game sample. He and his staff have not overloaded young players with complicated plays, instead focusing on simpler ones and letting them use their natural ability to their greatest extent.

From afar, that seems to be an easy thing to do. As evidenced by last season, that's not always the case. Even with a "vanilla" offense, the team has enough talent to do damage. It was difficult for fans to really know this beforehand, considering all we had seen came with a completely different system than the one Brown is using.

Then again, the Sixers won by three points, and Thaddeus Young hit three three point shots and no long twos. Maybe it really is that easy. Maybe we were just wrong, and maybe we should have expected something better all along.