In this special edition of the Sunday Morning Shootaround, we look back at Kwame Brown's time as a member of the Philadelphia 76ers. The sad part about it all is that most of these quotes aren't made up.

Share All sharing options for: The Complete Oral History of Kwame Brown's Time With the Philadelphia 76ers

Rod Thorn, former President and General Manager, Philadelphia 76ers: After we lost to Miami [in the playoffs] in 2011, we knew that we had maxed out and that we had to get stronger on the front line. Doug [Collins] started lobbying for Kwame during that offseason, but nothing came of it until the following summer.

Doug Collins, Analyst, ESPN; Former Head Coach, Philadelphia 76ers; Consultant, Philadelphia 76ers: I was big on Kwame at the time - I still am. I talked to him about finding a home where he can be around people that are going to nurture him. Kwame's a very sensitive guy.

Thorn: We were kind of limited as far as what we could do financially, but once we exercised the amnesty clause on Elton Brand, we were able to bring back Spencer Hawes and add a few other pieces as well.

Collins: I hated to lose EB, but using the amnesty on him allowed us to re-sign Spence, bring in Dorell Wright and Nick Young... Swaggy P... and we still had enough to go out and get Kwame.

Ed Stefanski, former General Manager, Philadelphia 76ers: I wasn't in favor of bringing in Kwame Brown when Doug brought it up back in 2011, and I was gone by the time they actually pulled the trigger in 2012. I heard that Doug wanted to give Kwame a four-year deal, but a few people in the front office balked at that. And who could blame them? Four (redacted) years? For (redacted) Kwame Brown? Unbelievable.

Joshua Harris, Majority Owner, Philadelphia 76ers: All of our personnel decisions are made by more than one person, and there were those involved in the process who were adamant about signing Kwame Brown to a long-term contract. Ultimately, we ended up giving him a one-year contract with a player option, which was essentially a two-year deal. All in all, it was a reasonable risk for a someone with Kwame's potential.

Adam Aron, former CEO and T-shirt cannon operator, Philadelphia 76ers: Everybody signed off on Kwame Brown. So you can hold anyone and everyone accountable because we only have 14 or 15 players on a NBA roster and I assure you that there are a lot of people in the room when a decision is being made and everybody's got to sign off.

Mark Bartelstein, Kwame Brown's agent: Kwame and Doug have a relationship that I think really has grown over the years. It was a really great fit.

Thorn: People had unreasonable expectations for Kwame. They were evaluating him from the standpoint of being the first pick in the NBA Draft once upon a time. All we needed for Kwame to do was to be a defensive player, rebounder, stalwart on our back line to help us from that angle. That's something that we didn't have at the time, and that's what Kwame had done the last few seasons before he got here. 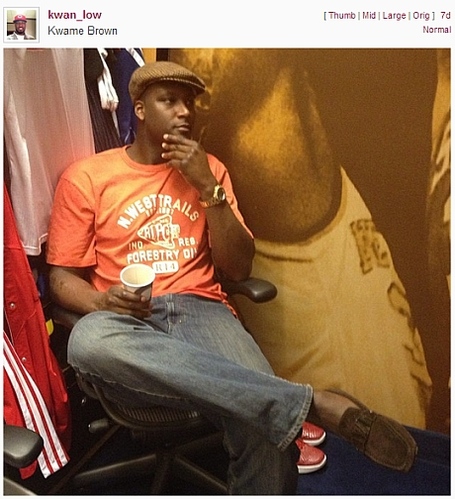 Collins: The plan was to start Spence at the 4 and have Kwame do the heavy lifting and play against all the big centers. I didn't see any reason why Kwame couldn't have been one of the five best defensive centers in the NBA. And if it wasn't for the injuries that he had, I think we would have truly seen the best of what Kwame Brown had to offer, especially since we didn't have Andrew [Bynum] all year.

Harris: Even though Andrew Bynum's situation was up in the air last season, we thought that we'd be OK at the center position with Kwame Brown. But, for whatever reason, it just didn't work out.

Sam Hinkie, President and General Manager, Philadelphia 76ers: After I arrived in May, there was never any serious thought to offering Kwame Brown a buyout this offseason. Sure... we had discussions about it, but then again, we have discussions about everything. Coming into the year, we thought that he would be ready to go once Opening Night rolled around. Unfortunately, that wasn't the case.

Vito: We only get to see the last few minutes of practice, so most of the good stuff is already done by the time they raise the curtain. They're usually shooting free throws at that point, but after that, you'll often see a couple of guys stick around to work on a few moves. Not Kwame, though. He was always the first one in the locker room, and you'd see him walking around PCOM (Philadelphia College of Osteopathic Medicine) with a plate of food in his hand at least once a week.

Michael Carter-Williams, point guard, Philadelphia 76ers: I thought he was coming back this season. I mean... when we went to Spain, they had his poster hanging in the arena. His hamstring was really giving him trouble, though - he was always asking me and Khalif [Wyatt] to go get candy for him.

Lavoy Allen, forward/center, Philadelphia 76ers: I think he gets a lot of flack because you expect a No. 1 pick to put up big numbers. So, I mean, he really didn't do that early on in his career. But Kwame [was] a great teammate. He's strong as hell. I don't have any problems with Kwame.

Collins: It's a shame... no one talks about the 6 and 8 he put up against the Mavericks last November. Or that game against the Lakers where he had 8 rebounds and blocked Dwight Howard's shot into the stands. I'll take that every night from a player like him. But when people mention Kwame's name, they only want to talk about something negative. And that's not fair... that's really not fair.

Brett Brown, head coach, Philadelphia 76ers: Kwame's injuries got the better of him... through his injuries, he was never really able to get on a court... If he can find career-best fitness, he still has value.

Vito: The closest Kwame Brown got to seeing the court this season was jogging lightly on the anti-gravity treadmill beside [the] practice floor at PCOM.

Hinkie: He was working hard in rehab and is trying to get back. I suspect he will.

Collins: I've had the opportunity to coach Kwame twice now, and I wish I could go back and be a better coach and a better mentor for him. And, for his sake, I hope Kwame's career isn't over. There are 29 teams that should be picking up the phone right now and dialing Mark [Bartelstein, Brown's agent]. Just like we did for Andrew last year, I think that we should all keep Kwame in prayer. He didn't play all that much when he was in Philadelphia, but he's still a Sixer. He still has a few Ace of Spades performances left in him.