An Evening With Dr. J

Share All sharing options for: An Evening With Dr. J

Athletes are wholly cognizant of their own sports mortality, and even one Julius Winfield Erving II - one of the 50 greatest players in NBA history - admitted that he doesn't look forward to the day where his star doesn't shine as brightly as it once did.

So, to that end, Erving finally decided to pen his autobiography. The 63-year-old has had plenty of opportunities to tell his story over the years, but chose to do so now in order to give an unbiased and accurate account of his life.

Of course, even if Erving hadn't chosen to write the book, no one would ever - or could ever - forget about "The Doctor." That statement is especially true for the several hundred people who showed up at the Free Library of Philadelphia last Thursday to hear the former Sixer share stories from the recently released "Dr. J: An Autobiography."

Some 26 years after his retirement, Erving remains highly regarded in basketball circles, and his impact on the sport (and society at-large) simply can't be overstated. He's currently the sixth-most prolific scorer in the history of the NBA/ABA (30,026 points) - a glowing achievement for someone who didn't realize until the age of 20 that he could make a living by playing professional basketball.

We love our sports here in Philadelphia, but we don't always love our sports heroes. Michael Jack Schmidt was booed mercilessly during most of his 18-year career with the Phillies, and he just happens to be the greatest third baseman of all time.

Conversely, Erving was embraced by the City of Brotherly Love immediately upon his arrival in 1976. "The Doctor" and then-wife Turquoise were nothing short of Philadelphia royalty, and by all appearances, they were class personified.

"We are the Bonnie and Clyde of black and sexy," wrote Erving in his autobiography. "The JFK and Jackie of African-American and cool. Dr. J. and Turq." 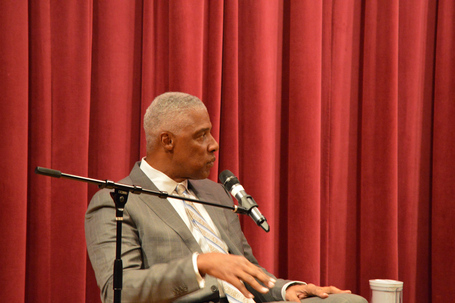 The Ervings quickly took to Philadelphia, and it didn't take long for the Sixers' star forward to realize how much disdain the city had towards the Boston Celtics.

"I had no idea that the rivalry was so deep and intense and personal," said Erving. "So I only had one choice: Hate Boston."

The Sixers and Celtics squared off in dozens of physical contests during the late 70s and early 80s, and during one memorable showdown, Erving and Celtics' forward Larry Bird actually came to blows. If nothing else, it was strange to see the typically calm, unflappable Erving unleash a flurry of overhand rights in the direction of Bird's head.

"I look back at it now... I'm kind of glad that it happened," said Erving when asked about his fight with Bird. "I got a couple of shots in."

During a recent interview, Miami Heat forward LeBron James said that his favorite player as a child was Michael Jordan... who grew up idolizing Julius Erving... who admittedly cribbed some of his best moves from the great Connie Hawkins.

"The Hawk" was a playground legend who reigned supreme over Harlem's Rucker Park during the 1960s before starring in the ABA and the NBA. Erving was a streetball icon in his own right, and due to the NCAA's ban on dunking during his years at UMass, the 6'6" forward took out his pent-up aggression on the courts and the rims at the corner of 155th Street and Frederick Douglass Boulevard.

"Sophomore and junior years, I stored up a lot of dunk anxiety," said Erving. "So when I got to the Rucker League, someone was going to catch it."

There were more than a few muggy, summer nights in which fans climbed trees and sat perched atop chain-link fences in order to get a glimpse of "The Doctor" in action at the Rucker. "It wasn't great for the [NBA]," said Erving, who noted that playing on the blacktop did damage to his knees. "But I gave the Harlem Pro League five years, and they gave me a lifetime of appreciation."

The crowd at the Free Library made no secret of their appreciation last week, snapping pictures and engaging with Erving at every opportunity. The questions - during both the moderated portion and an informal question-and-answer period with the audience - weren't pointed, but that was to be expected. After all, most in attendance grew up idolizing the man that they came to see, and those who didn't would have had they been old enough to watch Erving in his prime.

The book itself presents an extremely honest portrayal of Erving's life - a life that most (mistakenly) thought was idyllic once upon a time. To Erving's credit, he has made no secret of his many indiscretions, noting that they're as much a part of his story as his fantastic accomplishments on the basketball court.

"I think the subject matter poses a dilemma," said Erving when asked about his decision to be completely candid in his autobiography. "I'm old enough and experienced enough to meet that head on. That's why I'm here."