Sixers and Fans Must Be Really, Really Patient

This goes for everybody.

Share All sharing options for: Sixers and Fans Must Be Really, Really Patient

After the Sixers started off hot, the fanbase was divided -- is this awesome or terrible? Should I be happy or homicidal? Are they Sixersing this? What does Sixersing even mean anymore? Where'd I leave the remote?

Now that they have lost six of their last eight games, things have calmed down a bit. But it seems like people are still more reactionary than they should be. So I'm here to tell you once again: Chill.

The season is 82 games long. 11 games have gone by. In the 71 games that remain, things will even themselves out. Evan Turner will not continue shooting a thousand percent at the rim, Spencer Hawes will not remain Jesus Shuttlesworth from beyond, and Tony Wroten will not-- nevermind, Tony won't change a bit.

If You're Mad About The Sixers Winning, Stop It 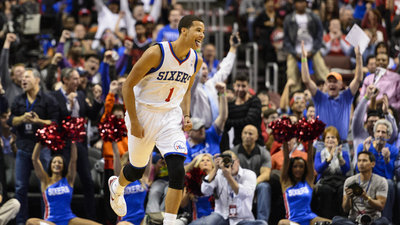 Talking people off the ledge as early as two games into the season.

Point is, in the same way that the front office needs to be patient with all the losing in the next year or two or three, the Tanking Coalition needs to be patient with wins and faster-than-expected development. Because that's what's really more important -- losing by itself won't get the Sixers anywhere. A system and a bedrock foundation need to be set up in order for the players we have and the players we will have to succeed down the road.

It's great news that the Sixers have shown signs of awesomeness. Not just from a FUN perspective (although honestly, that's damn cool -- recognize), but also, hey, Brett Brown can coach. Michael Carter-Williams can be a legitimate starting point guard in this league and maybe more. James Anderson and others could be role players for years. Sam MF Hinkie.

So don't worry about the wins. Don't worry about the bad losses either. Just glide through this season like you're on a strong LSD trip and don't concern yourself with a thing. Keep your eyes on the draft prospects. There are no realistic bad outcomes. We're cool.