Not So Easy: Sixers Get Smashed By Pelicans 135-98

Ryan Anderson's 26 points and Anthony Davis's all-world defense were a recipe for disaster for the Philadelphia 76ers as they fell victim to the New Orleans Pelicans 135-98 on Saturday.

Share All sharing options for: Not So Easy: Sixers Get Smashed By Pelicans 135-98

The 135-98 loss that the Philadelphia 76ers suffered at the hands of the New Orleans Pelicans on Saturday wasn't your run-of-the-mill 37-point blowout. Not only did the Sixers give up a season-high in points, but they also reset the clock on a few other dubious records:

For what it's worth, the Pelicans came into Saturday night's game with a full two-day layoff while the Sixers were fresh off of a 113-103 drubbing at the hands of the Atlanta Hawks on Friday. Even so, that's still no excuse for the 76ers getting run off of the floor by a team that was just 3-6 on the year entering Saturday night.

The game was decided soon after the opening tip: New Orleans controlled the tempo for most of the first quarter and wound up with a 34-22 lead after 12 minutes. Anthony Davis had five blocks in the first period and ended the night with a career-high eight (to go along with 13 points and nine rebounds in just 28:39 of action).

The second quarter was more of the same as the Pelicans poured in 33 points to head into halftime with a 67-46 lead. The Sixers shot just 39.6 percent over the first two periods, and never really put together any sort of run to speak of. 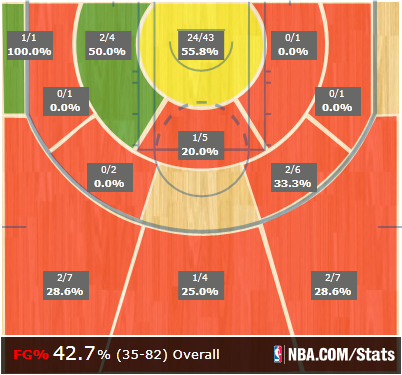 Bad Evan Turner showed up in the Big Easy: The former Ohio State swingman ended the night with a season-low four points on just 2-for-11 shooting. Darius Morris led the team with 20 (mostly garbage time) points, while Tony Wroten had another strong offensive showing with 19 points.

Pelicans' forward Ryan Anderson returned to action Saturday for the first time after breaking a toe in late October, and he casually dropped in a game-high 26 (including 6-for-10 from beyond the arc). Once again, the Sixers' perimeter defense was virtually non-existent: New Orleans finished 13-for-28 (46.4 percent) from long distance.

In all, eight Pelicans finished the night in double figures, and as a team, New Orleans shot a scorching 61 percent from the floor.

On Monday, the Sixers will try to salvage something from their current road trip as they take on the Dallas Mavericks at the American Airlines Center. Hopefully, they won't give up 135 points again.