The Impact Of Spencer Hawes And His Increased Range

Spencer Hawes is playing tremendous basketball so far this season, and it's opening up plenty of scoring opportunities for his teammates.

Share All sharing options for: The Impact Of Spencer Hawes And His Increased Range

That is, of course, no revelation to anybody who has watched the Sixers during the first 9 games of this season.  Hawes is posting by far the best numbers of his 7 year career, bests in points, rebounds, blocks, FG%, PER, WS/48, TS%, free throw rate, defensive rebounding rate, and virtually every metric you can find, either advanced or traditional.

The biggest beneficiaries of Hawes' stellar play thus far have been Evan Turner, Michael Carter-Williams, and Tony Wroten.  In this early part of the season, much talk has been centered around their improved play -- and about finding the reasons why they are playing so well so we can try to determine the sustainability of it going forward.  Many reasons have been pointed out for Turner, Wroten, and Carter-Williams play thus far, from pushing the ball in transition, to better designed half-court offense, better conditioning, and so on.  All of these are certainly true.  That being said, it's also worth looking at the impact that Spencer Hawes' stellar play has had on his teammates.

Here are some of Evan Turner's numbers with Hawes on and off the court.

Again, the sample size is not particularly large, especially with Hawes sitting.  Still, 67 minutes is enough to start looking at trends.  The trend is not only universal but it is also drastic.  We're not talking slight drops in effectiveness but a drastic reduction.

With Hawes on the court, Turner's shot distribution is significantly improved, attempting nearly 40% less mid-range jump shots than when Hawes is on the bench.  Not only that, but he's struggling to finish in the paint when Hawes has not been playing and he's getting to the line much less.

A similar case can be made for Michael Carter-Williams.

Again, some very definite trends, and many that align with what is happening with Evan Turner.  He is getting better shots (more shots within 9 feet), doing a better job of making those shots in close, and getting to the free throw line better, all yielding a much more efficient overall player.

(Michael Carter-Williams' overall offensive rating doesn't take as much of a hit as Turner's does, largely because he is tasked with creating more offense for his teammates with Hawes on the bench.  His own offense, however, actually takes a worse hit than Turner's does).

Even his three point percentage, which might seem fluky and unrelated to Hawes' absence, likely has a correlation.  So far this season, every one of Michael Carter-Williams' made three pointers has been with his feet set rather than off the dribble.  Hawes and his "ball friendliness" would be one of the primary people feeding MCW the ball and thus you could theorize that he is getting less open catch and shoot opportunities with Hawes on the bench.

(Side note, Michael Carter-Williams' struggles finishing through contact and against a shot blocker, as this table hints at, is one of the reasons, along with shooting off the dribble, that I'm not yet ready to fully buy into him).

Would you be surprised if I told you that Tony Wroten's splits have shown a similar trend?  You shouldn't be.

Once again, a distinct trend: with Hawes in the game, Wroten is getting more shots at the rim, leading to a higher ability to draw fouls and a much more efficient and effective offensive player.  The changes are once again consistent and staggering.

With such a distinct trend from three different players, what has been the cause?  One big aspect of it could be Hawes'  newfound three point range and his ability to draw the opposing teams shot blocker away from the hoop.  Last year, Hawes attempted only 1.1 three pointers per game, connecting on only 0.4 per game and shooting 35.6% in the process.  So far this year he has attempted 3.8 per game, connecting on a staggering 1.9 per game at a 50% clip.  Making nearly 5x more three pointers per game is quite the improvement, and something defenses have certainly taken notice of.

This is probably the part where I question the sustainability of Hawes' shooting.  While the general trend of virtually abandoning the long-range two point jumper (only 7 attempts so far this year) in favor of the increased reward of the three pointer is generally one that will lead to a higher expected value, moving further away from the hoop doesn't typically yield a higher field goal percentage.  Yet, so far this season, Hawes is shooting better from three point range this year than he did from 16-23 last year, and not marginally better but 14% higher.  To question the sustainability of Hawes' ability to continue to shoot 50% from deep on such a drastic increase in attempts would not be something you would get much argument from.

But if he continues to make shots from three point range on a consistent basis and at an above average clip, it will open things up for guards driving to the hoop.  Not only are teams more likely to guard the shot because of its higher expected value, but pulling a big 20 feet from the basket makes it much harder for them to recover and provide weakside help defense than if they were pulled 15 feet from the basket.

There were a few plays the other night against Houston that illustrated Hawes' impact on helping driving guards get into good scoring position perfectly.

This first play is a hand-off with between Hawes and Tony Wroten.  First, Hawes makes contact with Wroten's defender, something he hasn't always done in the past.  Dwight Howard is stationed 19' from the basket, an impact of Hawes' threat from the perimeter. 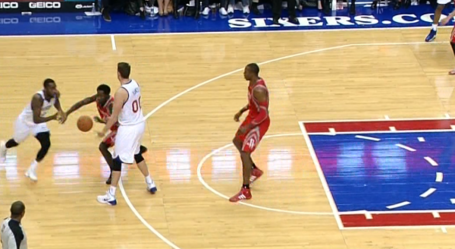 However, pulling Dwight 18 feet from the basket wasn't necessarily the greatest impact Hawes' range had on the play.  The real positive was Dwight's slow reaction to the driving Wroten, as he stuck with Hawes during his pop just long enough for Wroten to get a step, and an open lane to the basket. 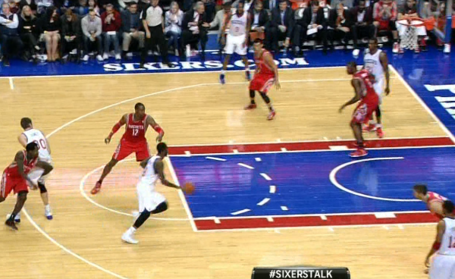 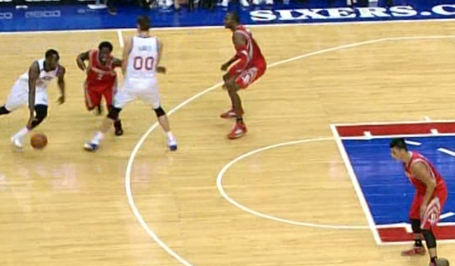 This time, Dwight responds a little bit quicker, giving Hawes less time to pop than he did before, but it's still too slow.  With how quick Wroten is, Howard needs to cut him off, not go step for step with Wroten to the basket. 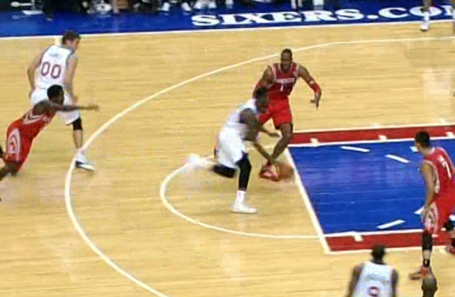 The end result is Howard cannot keep up, giving Wroten a clear path to the basket and a high percentage look. 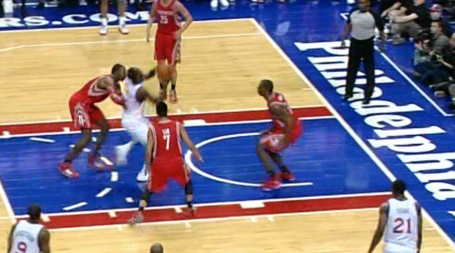 This final example from Hawes was one of the end of game plays that Brown drew up out of a timeout.  This time, Hawes receives the inbounds pass with his back to the basket 20 feet from the hoop.  Howard is not guarding him this time, as Houston elected to put the shot blocker on Thaddeus Young, likely in an attempt to keep Howard closer to the basket due to the success Hawes was having drawing him out earlier in the game. 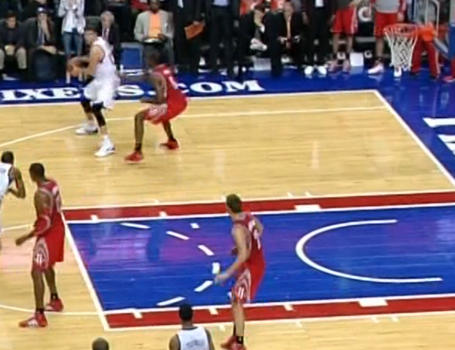 With Hawes' man up on him, and Howard inexplicably defending Young far away from the paint, the lane is wide open for a James Anderson cut to the basket, a relatively easy pass for a talented passer such as Hawes and something which makes his ability to draw his man away from the hoop all that more beneficial.  The play, of course, ended up in a Chandler Parsons block, but the concept is still the same: there's one less big man in the paint and you're far more willing to take your chances with Anderson finishing over Chandler Parsons than you are on the big that would be defending Hawes. 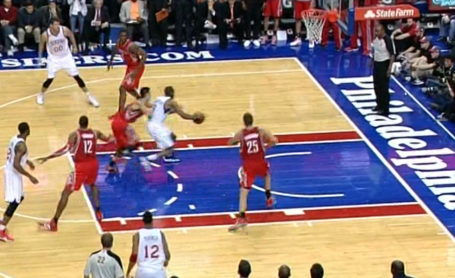 Perhaps an even better example of this would be to compare it with a big man who is unable to draw Howard away from the basket.  Here, Lavoy Allen is about to receive a pass in order to setup a similar hand-off to the one ran with Hawes above.  Howard stays well into the painted area, a combination of Allen being 18 feet from the basket rather than 23 as well as Allen's struggle so far this season, shooting only 35.3% from 17-23'.  Closer to the basket, lesser percentage, less valued shot, less reason for Howard to give up the lane. 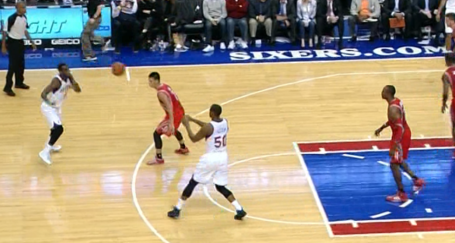 First of all, Allen gives a half-hearted pop, which no doubt impacts Howard's necessity of paying him much attention.  That being said, Howard is entirely focused on the ball handler in this instance, and cuts off the driving lane completely.

So, Lavoy immediately tries to set another pick to free Wroten up.  This pick does a much better job of allowing Wroten to get the edge, but  once again Howard pays Allen almost no attention, instead focusing on cutting off the driving lane that Wroten now has.  The end result of this play was a turnover.

The season is still young, and Hawes is due for a regression in virtually every conceivable category.  That being said, with Brett Brown encouraging Spencer Hawes to eschew the dreaded mid-range jump shot in favor of the three, and with Hawes showing incredible proficiency from deep, driving lanes have opened up considerably for Philadelphia stable of dribble penetration guards.