Head coach Brett Brown's after timeout plays have been so successful, it's almost as if he's using some sort of voodoo magic.

Since signing on to become the Sixers head coach in August, one of the most notable things about Brett Brown is that there is no unimportant aspect to the game of basketball. He has emphasized fitness to his players, as being in shape is a key component to running his quick, "pace and paint" offense. However, there may be little Brown values more than having his team capitalize on offensive possessions after timeouts. Coaches use their timeouts for various reasons, but Brown sees them as a different way to attack the opponent. Considering some of the inefficiency Sixers fans are used to seeing from this team, Brown's ability to put together effective plays is almost...magical.

In Friday's 94-79 rout over the Cleveland Cavaliers at home, the Sixers executed on three of their four after timeout plays, two of which were extremely well diagramed. On the first, Brown is hoping to swing momentum a after the Sixers found themselves down 11 points early. 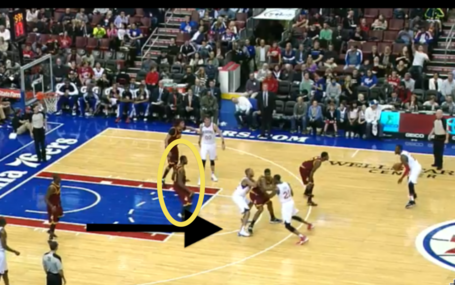 Here, Evan Turner makes a bee-line from the paint to set a (soft) back pick on Thaddeus Young's man. Thad then rolls towards the basket, his defender following, as Evan moves towards the Sixers sideline. Thad's movement catches the eye of Turner's defender, Earl Clark (circled in yellow), for just long enough to create some space for Evan.

As Clark recovers and attempts to follow Turner, he's met immediately by a Spencer Hawes screen. Hawes screen isn't necessarily hard, but it's just enough. Turner continues his motion towards the sideline and Tony Wroten hits him with a pass towards the baseline. 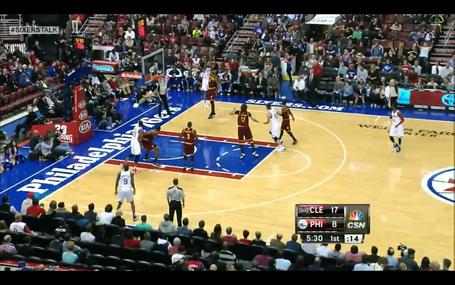 By the time Clark gets there it's too late, and the ever so impressive Evan Turner is able to sink it. Give the former Ohio State standout just enough room this year, and he's been gold from just about anywhere on the floor.

On the second play, it's another designed look for ET run to perfection. 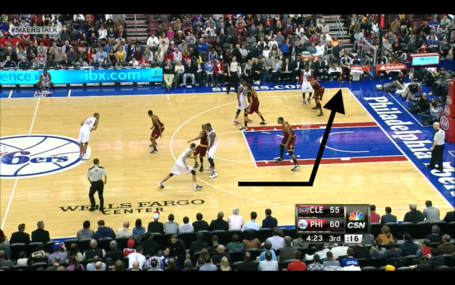 Michael Carter-Williams brings the ball up, dishes to Turner at the top of the key, and starts to make a move for the baseline. Jarrett Jack attempts to stick with him, but is picked nicely by Lavoy Allen. 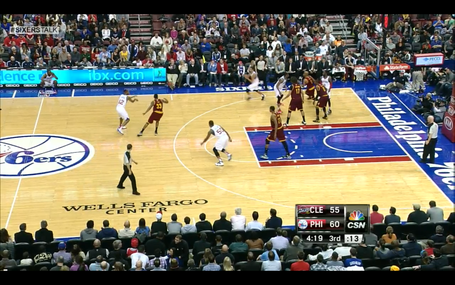 As you can see, MCW has ran clear along the baseline and towards the top of the key. So too did Jarrett Jack, but is forced to go around the wall created by Young and Wroten on the far sideline. Turner gives it up to Carter-Williams as Allen gets in position to set a blind pick on Alonzo Gee, with Bynum sluggishly following Lavoy. 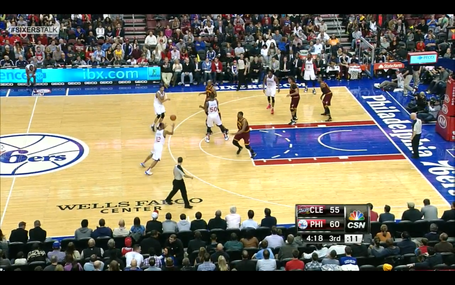 MCW hits Turner with the pass, Allen hits Gee with a blind pick, and the only thing stopping Turner from the basket is a immobile Andrew Bynum who struggles to move laterally. Well played by Brown to attack the 26 year-old with two bad knees, and it's an easy deuce for Turner.

The Sixers showed even more dominance on plays coming out of timeouts on Saturday night, converting on a whopping nine of eleven chances.

With recurring production like that, it may not be magic, and more so the sign of one hell of a coach.