There are so many conflicting emotions in the hearts of most Sixers' fans right now. Let's all just enjoy this win over the Wizards and figure out the whole draft thing some other time, shall we?

Share All sharing options for: 76ers Remain Undefeated With 109-102 Victory Over Wizards

The Philadelphia 76ers' 109-102 victory over the Washington Wizards Friday night was one of those contests where the box score doesn't tell the entire story.

His counterpart, Michael Carter-Williams, was 0-for-3 over the same stretch, and had no trace of the magic that helped him lead the Sixers to a 114-110 win over the Miami Heat on Opening Night. Quite frankly, he looked like a 22-year-old man who was playing in his second NBA game.

Wall, of course, was the first pick in the 2010 NBA Draft, and he let it be known from the opening tip that he was the best player in the building. The former Kentucky Wildcat sparked the Wizards to a 24-11 lead, leaving 76ers' head coach Brett Brown scrambling to find something - anything - that would work. Every healthy player on the Sixers not named "Brandon Davies" got run in the first quarter, but after 12 minutes, the 76ers still found themselves down by a dozen points.

If the game was scored like a boxing match, Washington would have held a two rounds-to-none lead on all three scorecards.

The second quarter wasn't much better: Both teams were careless with the basketball, but the Wizards managed to go into the locker room at the half with a 54-44 lead thanks to 10 offensive rebounds. The Sixers' starting backcourt had all of two points at the time, and all signs were pointing to a double-digit road loss.

Something changed after intermission, however. All of the momentum Washington had early on suddenly vanished. Brett Brown's young charges played... smarter while Wall and the rest of the Wizards became less assertive on offense. The 76ers never got into a groove from beyond the arc (they finished 6-for-23 from three-point range), but they made a concerted effort to attack the basket. And when they did so, the shots kept falling. 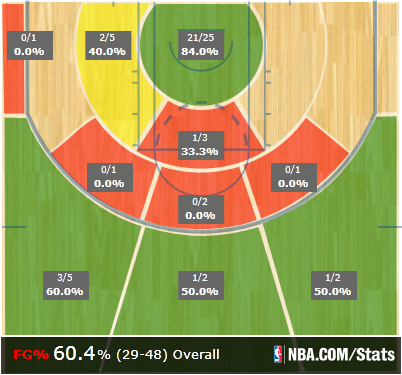 After scoring just 44 points in the first two quarters, the Sixers racked up 65 points in the second half, shooting 60.4 percent from the field over the final 24 minutes. Carter-Williams scored 12 of his 14 in the third and fourth quarters, and Spencer Hawes nearly notched a double-double after halftime (10 points, nine rebounds).

Thaddeus Young led all scorers with 29 points on 14-for-20 shooting, and Evan Turner continued his aggressive play by finishing with 23 points. More impressive than anything is the fact that the Sixers held Wall (who ended the night with a team-high 26) and shooting guard Bradley Beal to a combined 3-for-17 from the field over the final two quarters. And, for what it's worth, the Sixers actually outrebounded the Wizards in the second half 25-17.

#Sixers' Evan Turner: "In anything in life, the toughest person is going to win. The guy willing to die in the fight is always going to win"

The new version of the "Night Shift" played well: Tony Wroten was active on both ends of the floor (though four TOs in 19 minutes is a little troubling), and Lavoy Allen's offense (10 points) overshadowed his lapses both defensively and on the glass.