Okay, Andrew Bynum Played Basketball for the Cavs and I Have Feelings

I needed a day to let the Sixers/Heat win marinate, but now that it's sunk in, we should talk about the other thing.

Share All sharing options for: Okay, Andrew Bynum Played Basketball for the Cavs and I Have Feelings

I've avoided any video of Andrew Bynum playing basketball for the Cleveland Cavaliers. Avoiding pictures was impossible, but I remain steadfast in my inability to will myself to watch Bynum play for another team for which he scored 3 points on 5 shots in 8 minutes of game action.

Why? We've supported the Bynum trade from the beginning, insisted upon supporting it during fiascos one through eighteen last season, and feel rewarded for supporting it since it resulted in a complete overhaul of the organization. We're in a great place now. Sam Hinkie is dangling Joe Alexander in front of my face, Michael Carter-Williams had the best opener ever, and two top-15 picks in the loaded 2014 Draft seems highly probable. Business is a-booming.

But this isn't about where we are now. This is about one guy. And he still nags at me. He's the one that got away. 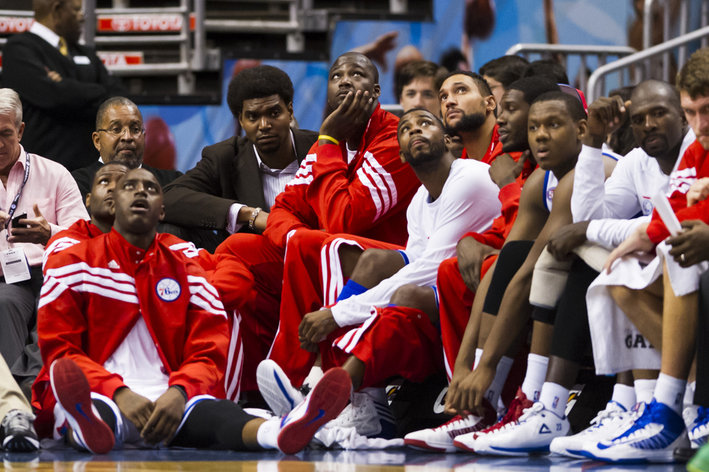 I don't know. I don't know anything except how torturous last year was. There's only so long I can be the good guy while I watch my date leave the party with someone else and then get texted pictures of them having sex.

It seems now that there is a solid chance Andrew Bynum did not risk further injury or discomfort last season because he did not have incentive to do so. Taking the court and looking anything less than great would lower his value. Now that his contract with Cleveland stipulates that the more games he plays, the more money he makes, oh look, he's willing to put himself on the line again.

Fuck him. I don't care if he'll contend he's a bit more healthy now than he was last year. I don't care that there's little Bynum could've done for the Sixers last year anyhow. I'm abandoning empathy in favor of vitriol. The writhing fury of a guy waiting for a train that will never come.

I want him to do poorly. I do not want him to have success of any kind. I hate Doug Collins as much as he likely does, but now he's right there with him. It's not the hair or the bowling or the flamenco dancing. It's that he came to Philadelphia, said he wanted to be here for a long time, got cranky about how they were speaking to him, hit the easy chair in rehab, and left town having never played a minute. Then he goes to some other crappy place and plays opening night? Regardless of whether it's true or not, that's how it feels. It's maddening.

He is an enemy. Very rarely do I take sports seriously, but there was a psychological toll inflicted upon the few poor souls who cared about the Sixers last year, and he gets a huge chunk of the blame. I hope he fails miserably. We're better off without you. Thank you for not playing. I will never forgive you.

Logic? Reason? Fresh out. All that's left in my residual emotive bank from last year is bitterness. Now let's never speak of this again.