The first of three LB Staff Predictions leading up to the season opener on Wednesday.

The 2013-14 Sixers will be the best team of all time -- we can all agree on that, providing you have a liberal definition of "best" -- but they're surprisingly light on on-court storylines, especially with Nerlens Noel sitting for much of the season while rehabbing his torn ACL. What I see as the most important basketball (non-transaction) thing to track this year is the play of former Syracuse Orange guard and Lord & Taylor blacklist member, Michael Carter-Williams.

Trading Jrue Holiday for Nerlens and a pick was Sam Hinkie's coup in June's draft, but married to that move was the selection of MCW -- not CJ McCollum, who was selected immediately before him, and not Dennis Schroeder, who the Sixers also liked quite a bit. If Hinkie missed on MCW, it's not irredeemable, but it's a significant blow to the progression of the rebuild. 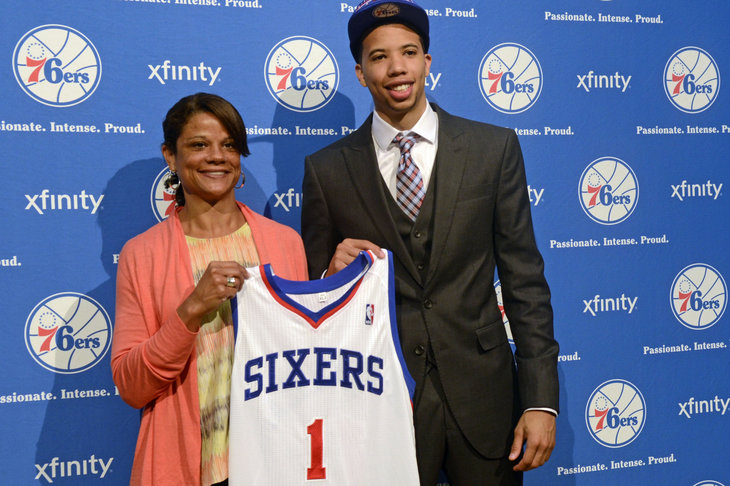 Where MCW ultimately lands on the scale depends largely on his jumper.

He's certainly unique enough to present difficulties for opposing teams, though the holes in MCW's game are significant -- SHOOTING! for one. In today's NBA, it's not good enough to have a good point guard (7 of the league's clear-cut top 10 teams have all-world point guard, and two of the others have LeBron James and James Harden), so the question becomes: will MCW become a franchise point guard or is he a stopgap asset until Hinkie finds the right guy?

The Liberty Ballers staff is divided. Though some were more confident than others, 5 of LB's 11 writers think he will be the franchise point guard. 4 don't think so. Two either weren't sure or didn't understand the question.

Rueter: "I think Hinkie and co. will give Carter-Williams every possible chance to succeed. Also, none of the highly touted draft prospects next year are point guards*, so this will be MCW’s job for the foreseeable future."

Pavorsky: "The jump shot may come eventually, and I'm inclined to believe it will, but Carter-Williams' ability to get to the basket with relative ease will definitely help him put points on the board. He'll be here for a long time."

Fischer: "He's long and athletic, which is a perfect combination defensively. I also believe he's shown improved decision-making in the preseason just from Summer League. That's a positive sign for the future as well."

Hofmann: "Can he make threes? I was pretty encouraged from what little I saw in the preseason, despite the fact he was only a 30 percent shooter from deep."

Burton: "Carter-Williams will eventually be a solid point guard, but he won't be a franchise-defining talent that the Sixers would be unwilling to part with. But solid is OK, especially given the lack of star power in the 2013 class."

O'Connor: "I don't think so, but it's going to be fun watching a year where he plays one on TV. There's a non-zero chance, but I find it unlikely."

Baumann: "He can't shoot. If you can't shoot, you have to do a lot of other things really well in order to be a franchise point guard. He could develop a jumper, but that's almost as big a question mark as doing all those other things well."

Justin: "No. If he fails to develop, Hinkie won't stick with him forever and if he does develop and is good, I see him as a piece in a blockbuster trade."

Steidel: "When the Sixers get good, I do believe he'll be at the PG position. Does that mean he's a franchise point guard? I'm not sure. I didn't answer the question."

It's important to first enforce the idea that no one is untouchable except for Hinkie himself. If the right offer comes along, everybody can go. That being said, I don't anticipate that happening with McDubs too soon -- his league-wide rep isn't super strong yet, and the total package seems to be worth holding onto for a good few years to flesh out his game before selling lower than you could.

Ultimately, I'm with Hinkie. Even though I didn't love him at Cuse, I can see how his game better translates in the pros. I love how he gets to the basket and to the line, and I buy the form on his jumper. But really, Hinkie. He hasn't given us any reason not to trust him implicitly. I'm just in.

Either way, it's one of the few things outside of losses to really watch for on the basketball court this year. What do you guys think -- is MCW the guy?