The Argument for keeping Kwame Brown over Royce White

The amateur capologist in me returns to explain why keeping Kwame over Royce White somehow makes sense.

Share All sharing options for: The Argument for keeping Kwame Brown over Royce White

As we've detailed on this site, the Sixers made their first (and definitely not last) round of roster cuts, with partial/non-guaranteed players Vander Blue, Mac Koshwal, and my fellow former Temple student Khalif Wyatt hitting the road. Joining them in a bit of a shocker is Royce White, whose rookie contract and roughly $1.72 million salary was not enough to secure a roster spot. Not shocking was Royce White's response, which was to go on Twitter to compliment the team and then retweeting comments bashing the team, all the while #BeWell-ing the world at large.

That erratic, tweet-happy behavior is something of a staple for White, and ultimately could have been the reason for his cut. On top of the lackluster defense and less than perfect shape, the team may have decided he wasn't worth keeping around.

But why then would Kwame Brown be worth a roster spot? Kwame has not practiced during the preseason due to a lingering hamstring injury. He's also in the second year of a laughable two-year deal with only $2.945 million committed. There's also that whole thing where Kwame hasn't been well-conditioned since signing and realizing he'd play as a backup to he-who-must-not-be-named. Surely, he's worth less on the court than whatever Royce White could provide, even if his various adventures as cataloged by Sixers beat writer Chris Vito are a welcome sideshow.

On the surface, that appears to be the case. But then the NBA is governed by something called a CBA which complicates things.

We at Liberty Ballers talked at length about Kwame being used as an expiring contract in a trade. The Sixers haven't yet bought him out despite seemingly having no intention of ever putting him on the court, nor have they even discussed it to our knowledge. But he retains value because his presence means the Sixers can use him to absorb more incoming salary in a trade.

The $1.2+ million difference - over $1.8 million when considering that a team can take 150% back on any deal so long as the team is under the tax afterward - can be the difference between a trade going through without giving up another player or asset. The Sixers could combine 2 partial guarantee players to make up the White contract amount. At the least, it would take 3 to make up Kwame's. It could mean the difference between adding an already promising young player or a uncertain second round pick. The Sixers front office, obsessed with improvement on the margins, certainly considered that when cutting Royce White. 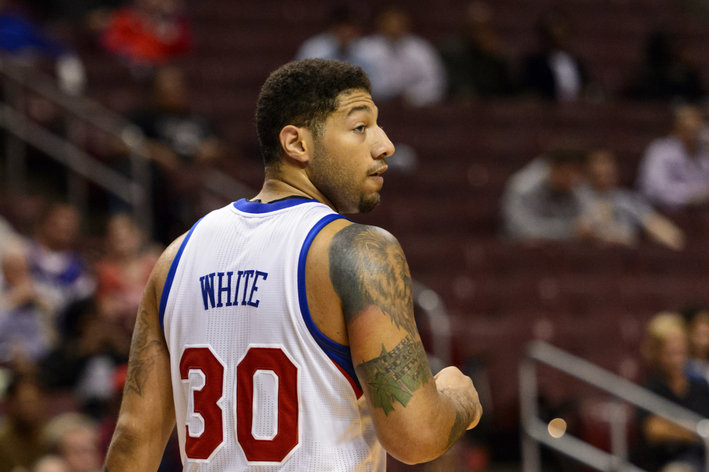 Levin discusses all of yesterday's releases.

White's own contract structure also had to factor into the decision. NBA rookie contracts have a weird structure - as you may already know, teams must pick up options for a player's third and fourth seasons at the beginning of the prior season. In White's case, there's no real decision - he played zero NBA regular season games and was about as uncertain of a commodity that exists outside of he-who-must-not-be-named and Greg Oden - and his disorder makes a long-term contract an impossibility.

The Sixers could not reasonably exercise his option before the year started. No matter, at the very least Royce was getting the Craig Brackins treatment.

Young players are generally nice to have because they are under team control for longer periods of time for relatively low dollars. Even if the young player flops, the team loses little financial flexibility, and the upside for teams is high. For Royce, if he bloomed, the Sixers might have actually been in a disadvantageous position, possibly limited in the amount they could sign him for* compared to other teams (again because of that confusing CBA thing).

*Only applies if they're up near the cap, which could be the case if they make a salary-dumping move, at which point Kwame likely becomes more valuable to have around, eating Peanut Chews because no one else will.

The strongest argument against cutting Royce is probably that the team should keep both Royce and Kwame. But the Sixers have to put some players on the floor^^, With injuries to Nerlens Noel and Arnett Moultrie, the Sixers have two healthy backup bigs aside from Kwame and Royce (Lavoy Allen and the roster near-lock Daniel Orton). While White is practically healthy, he'll also be unavailable for some road games just due to the nature of his condition. He would seem be available more often than Kwame, but he's similarly unreliable. The Sixers still need bodies to go through the motions of this season. It also forces the team to take fewer fliers on intriguing prospects.

^^Counter argument: "no, they don't." I'm not sure I can actually argue against that.

Of course, if Royce showed up at camp in shape and demonstrated more ability, I might not be writing this post. There's a point where the talent is worth it. But being short for his position, and a bit too heavy, and a bit too lax on defense made him seem like someone the team could live without.

Due to the cash considerations received from the Rockets in the trade, the Sixers basically spent $1.72 million in cap room in a meaningless season to acquire the rights to a promising young international player. That's a nice trade to make, especially if Aldemir turns out. But their cap space is the most valuable asset they have, and cutting Kwame could have weakened the value of the cap space.

The Sixers calculated that keeping Royce White, and gambling on his obvious talents, just wasn't worth the price in trade dollars, roster spots, or other assets. Yet somehow, Kwame Brown is. The NBA is weird.