Announcing a new feature that will hopefully make this season a little less painful.

Share All sharing options for: 5 Days Until Sixers: College!

Many words have been written about the futility that will come to characterize the upcoming campaign, many of them on this very site. There's no use in sugarcoating the situation: This year's Philadelphia 76ers are a bad basketball team, one that frankly will be very difficult to watch at times. For fans, with such a grim on-court product, it's the equivalent of going to Shawshank, only with a crappier narrator.

But like Andy told Red, hope is the good thing, maybe the best of things. And where will Sixers fans mostly find hope on a basketball court this year?

Hope will be on display at Rupp Arena, Allen Fieldhouse, and other college basketball cathedrals — or arenas, if you're not overly sentimental — across the county, as well as some fairly anonymous gyms in Europe and Australia, too. When Sam Hinkie traded Jrue Holiday for Nerlens Noel and a top-five protected pick, the move was made largely with this current draft class in mind. Not only did Hinkie pick up a likely late lottery pick in an extremely deep draft, he worsened his team for 2013-14, placing them firmly in the picture at the very top of the lottery.

Considering that the Sixers have their eyes fixed on the draft, why shouldn't we? I guarantee you that if Liberty Ballers doesn't have the most 2014 NBA Draft coverage out of the 30 SB Nation team-centric blogs, then one of them will have gone full Draft Express (you never go full Draft Express). Heck, we've already started. Over the summer, Roy did an awesome job detailing some of the players projected to go towards the top of the draft in "The Case for Tanking" Series. If you didn't read those four pieces, do it now and learn more about Messrs. Wiggins, Randle, Parker, and Gordon before the season starts.

The Case For Tanking: Jabari Parker 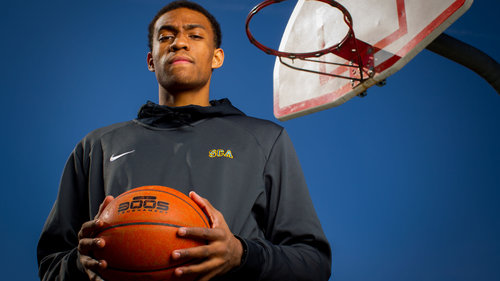 Jabari Parker would not be a bad consolation prize.

During the season, I'm going to head up a weekly feature that is going to be completely dedicated to tracking the progress of the projected draft class. I imagine that this feature will include contributions from pretty much every member of the LB crew at some point or another. Why? Because I want it to be comprehensive, entertaining, informative, serious, goofy, etc. Basically, it'll contain the type of variety that you always see here, except not about the Sixers.

As for what it'll look like, I imagine a smorgasbord of serious stuff like statistics, observational scouting, and rankings as well as goofy stuff like social media and which prospect has the worst haircut. Additionally, I hope this feature will provide Dave a forum to rant about Mike Brey when Notre Dame gets bounced in the first round again.

So when will this feature start? I'd say that most likely in two weeks, there'll be a huge season preview and then every week after that, another one will pop up. If I have my druthers, the feature will always be a couple thousand words, and hopefully, it'll be the type of thing that you'll want to print out and make bathroom reading.

Oh yeah, there will be of polls and we'll possibly feature content from the comments. In that spirit, I'm still trying to figure out a creative name for the thing. Any suggestions?