Surprising news, still developing for sure.

I like being wrong as much as the next guy, but this one is particularly surprising. According to everyone on Twitter, the Sixers have released Royce White and Vander Blue -- two guys I saw as near-locks to make the team. Additionally, Khalif Wyatt and Mac Koshwal are gone, which is less surprising I suppose, but not compared to who has seemingly made the next round of cuts.

Rodney Williams (who they must really like as a member of the Sevens), Gani Lawal, and Hollis Thompson have all NOT been cut. Daniel Orton and Tony Wroten also -- but I had them pegged as locks anyway, so that's going as planned.

Sixers Roster: Which 15 Make the Cut? 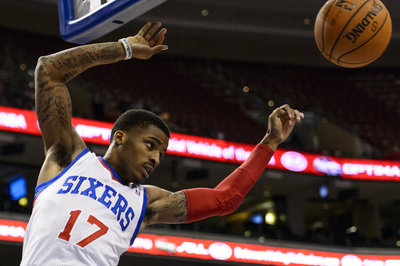 Everybody feels pretty foolish to spend all those words on Royce when it turned out that he didn't even make the team. Maybe it was his attitude, but I'm banking on the fact that they saw him play up close and didn't think he could get in shape to the point where he'd ever be worth the rest of the baggage that comes with him. Maybe he's just not that good. I liked some of the passing I saw in preseason, but he looks overmatched elsewhere. Shame. We'll have more on him later, because we can't help ourselves.

And Vander! I'm pretty bummed about it. He's kinda played his ass off here and liked a lot of what he was doing. But he is a bit derivative with Wroten, so.... yeah. Gonna miss him. Definite candidate for a Sevens invite.

Either way, I don't think Lawal/Thompson both make it -- and there are members of the media who seem to think Kwame Brown will be gone before the season, though that's money they could use in future trades.

Look out for Hinkie to scour the cuts of other teams for the last few guys on the roster. I'm sure he's already on it. Fab Melo, perhaps? Remember -- two of the 15 can be sent to the D-League. Any other Sevens would be on a D-League contract, thus able to be signed by any team. But there's also the newish clause that Jake Fischer reminds us of, where three training camp cuts can be optioned to the Sevens and remain under team control without counting towards the 15 roster spots. Doubt that's Royce though. Blue and Leaf maybe?

Best of luck to Khalif. A former Sixers regime would keep him on because "PHILLY GUY," but these guys don't have the soft hearts of women (that was a Game of Thrones reference - not sexism, I promise). Whoever ends up with the last few spots on the roster will be here because of upside, not geographical significance.

Let Hinkie do what he do.