In this edition of the Sunday Morning Shootaround, Lavoy Allen forgets to set the alarm on his iPhone, a former Sixer nearly wipes out on the Great Wall of China, and we take a look back at one of the greatest video games of all time. 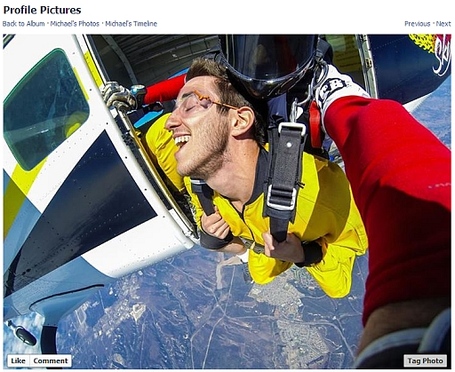 Thankfully, our fearless leader Michael Levin jumped out of a plane recently and didn't die.

Props to any of you out there who have done this: Voluntarily exiting a moving vehicle from 18,000 feet is far above my level of testicular fortitude. The Cedar Point RipCord is the extent of my daredevil activities - I did this back in '99, but the video footage of the incident is more rare than the clip of Dave Rueter's sister on Double Dare.

The expression on Levin's face is priceless - the following were my initial reactions to the photo:

Hey y'all! Check out @nickswagypyoung tryna film us goin down the toboggan @ the Great Wall! Gotta... http://t.co/1cPwzAEAxS

(Note: Who knew that you could ride a toboggan down the Great Wall of China?)

@TheBSLine @Liberty_Ballers How do we say "tank" in Spanish? We say "tanquear" or "tankear", but the right way should be "fracasar"

Liberty Ballers' unofficial sister blog Los Sixers De Philadelphia told us the proper way to say "tank" in Spanish, but since we're a full-service Web site, here are additional translations in other languages:

If you're going to oversleep and miss practice, you probably don't want to do it on the day that said practice is open to the public. Never change, Lavoy.

Brett Brown will discipline Allen, but with three of the team's bigs out indefinitely, it probably won't result in a marked decrease in playing time. In fact, to punish Allen properly, Brown would force him to play 35-plus minutes per night.

Lavoy may have missed practice, but he made it to the Wells Fargo Center in plenty of time to see Drake... cancel his concert after thousands of people had already paid $55 to park. Never change, Aubrey.

Tanner Steidel took this picture at Philadelphia's own Barcade yesterday. This, of course, led to a Saturday night spent poring over the NBA Jam Tournament Edition player rankings:

Exclusive from my iPhone! (Aren't I cool?) @NerlensNoel3 & the other Sixers rookies sing Happy Birthday. http://t.co/APtthbh9mh

The Sixers' rookies singing "Happy Birthday" to Mac Koshwal wasn't the most embarrassing moment of the Sixers' open practice on Saturday...

A 6 year old asked World B Free if he was ever a basketball player. #TogetherWeBuild