One of the many intriguing storylines in this delightful apocalypse of a season.

Share All sharing options for: Evan Turner's Final Year of his Rookie Contract

Despite taking on a much bigger role in the offense last season and seeing his efficiency hover around the same level, Evan Turner has himself a pretty bare bandwagon. With the organizational shift away from backwards-thinking dumbassery, popular opinion holds that Evan will be traded during the season or allowed to walk away after it.

Because Evan's got a pretty hefty qualifying offer ($8.72M) next year and Sam Hinkie values cap space more than Kwame Brown values Swedish Fish. Though Jrue Holiday got his fat contract at the start of last season when he was set to become a Restricted Free Agent, Evan isn't worried.

"I’m not upset about it. I know what type of player I’m going to be and I know who I am and I know what I’ve done. Obviously, we have a different situation. We switched GMs and we switched which direction we’re going, but I’m not going to sit here and be upset. [...] What I think is kind of funny is when I look around and see what’s going on, that’s what I laugh about. I think it’s going to be something good in the bigger picture. If I focus on winning, then everything will be all right."

I'm not entirely sure what he means he's laughing about -- the state of the team? In a positive or negative way? The media's perception of him? He comes back with the "focus on winning" at the end, which is cute.

Here's what I know: Sam Hinkie won't trade Evan away for nothing. He knows he's better off keeping Evan and letting him rack up garbage time stats to improve his value than deal him for a second rounder.

Evan Turner Against the World 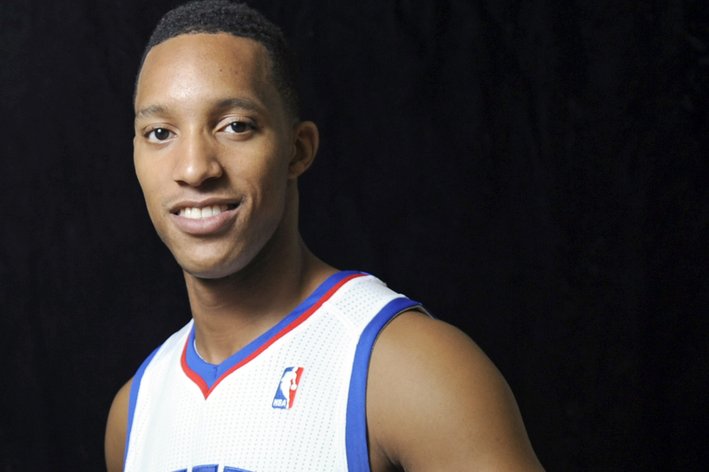 Not one of Evan's best possessions.

Keep in mind: Evan's had DOUG COLLINS as his head coach for three years. You can't blame it all on Doug (though I'd love to), but Brown and Hinkie's focus on the right things could unlock something in Evan. He's averaged almost 8 free throws per game so far this preseason. That's something to keep an eye on. An ET that gets to the line is a very different player than the one we've seen.

There was a time when we were excited about Evan Turner. Maybe... MAYYYYBE... we're not done with him yet. Bring that TS% up, keep pounding the boards, work within the flow of an actual offense... would you give THAT Evan a new contract? Certainly not the QO, but... 3/20?