The Sixers blew a whole lot of fastbreaks and missed a bunch of shots at the rim, but they won anyway. Unfortunately for the Wizards, Harry Potter isn't walking through that door

The Philadelphia 76ers beat the Washington Wizards 92-84 on Wednesday in a game far more complex than the box score may indicate at first glance.

The new look Sixers' starting lineup helped get the team out to an early 17-10 lead, and it appeared as if the game was going to get out of hand early. On cue, Philadelphia would promptly miss its next seven shots from the field, and the Wizards (11-33) actually ended the first quarter with a 28-25 lead.

A 15-5 run to start the second quarter allowed the Sixers (19-26) get back on track, and they went into intermission with a 48-39 lead. Thanks in large part to stellar defense by the backups, the 76ers forced seven second-quarter turnovers, and held Washington to 11 points on just 3-for-16 shooting in the period.

After a fairly non-descript third quarter, Philadelphia was able to extend its lead to 16 early in the fourth. But the Wizards would make yet another run, and they were able to cut the deficit to five with 90 seconds to go. However, even after Washington's frenetic comeback, it never felt as if the game was truly in doubt.

And it wasn't. Despite getting outrebounded on the night (46 to 43), shooting just a shade over 42 percent, and making just six free throws to the the Wizards' 17, the 76ers pretty much controlled the contest for the final 36 minutes. Truth be told, they easily could have won by 15 or more if they weren't so careless on the fastbreak and around the rim. Teams whose shot chart looks like this typically don't win professional basketball games, but this is a strange world in which we live: 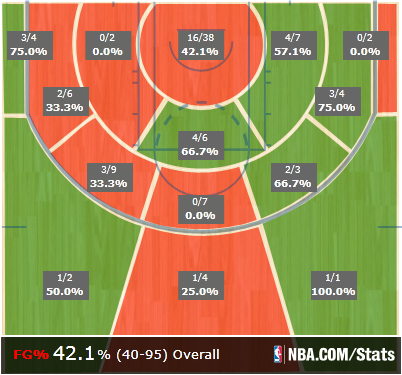 One can argue that there will be much more action less than less than 36 hours from now at Wing Bowl 21. There will definitely be more nudity.

This tweet is for @michael_levin of Liberty Ballers. I know you are loving Spencer Hawes double double and 3 blocks tonight.

On the surface, the Hawes double-double is cute. *Stephen A. Smith voice* HOWEVER... when you continue to be Cottonelle soft in the middle, and the man you're assigned to check (Emeka Okafor) goes for 15 and 17, then what does it mean? Furthermore, let's take a look at how Mr. Hawes got those points, shall we? 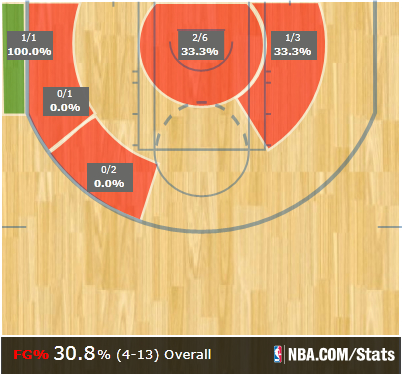 It was nice to see Dorell Wright after two straight DNP-CDs. The 6'7" swingman finished seven points, seven rebounds and five assists, and was fairly active on the defensive end as well. And kudos go out to Lavoy Allen (14 points, six rebounds) who had one of his best games of the year.

Nick Young was traded by the Wizards last year, so he came into this game with a little bit of a chip on his shoulder, and left with 18 points and four assists. Shelvin Mack was waived by Washington earlier this year, and he left tonight's game with his uniform just as clean and sweat-free as it was earlier in the day (DNP-CD). If you see an eBay auction for a game-worn Shelvin Mack jersey from Jan. 30, feel free to report the seller for fraud.

Okafor was the best Wizard on the floor tonight, but Nene (16 points, eight rebounds) was solid, and John Wall (nine points, six assists, five rebounds, five turnovers) had his moments. Tonight's loss marked the first time that Washington had lost consecutive games since Wall returned from his left knee injury on Jan. 12.

Jason Richardson missed his fifth straight game for the Sixers with left knee synovitis - he's scheduled to receive a second opinion on his injury from Dr. Richard Steadman in Colorado on Thursday. Damien Wilkins sat out against Washington due to personal reasons, while Wizards' guard Bradley Beal missed the contest due to a sprained right wrist.

A Friday night date with the Sacramento Kings is up next for the Sixers, who are now 2-1 on their season-long eight-game homestand.