It looks like Nick Young isn't the only one on this team getting special sneaker treatment.

I love sneakers. I love crazy. I love Jrue Holiday.

Add those three things together and you've got yourself a night comparable to only Saved By the Bell, early 90's style clothing while dancing to classic Paula Abdul tunes.

We at Liberty Ballers (aka, really just me) have written before about shoe-game and the Philadelphia 76ers by route of Nick Young. We previewed five possible ideas of what kicks he'd rock back in July (just minutes after Jordan was checking out Omri Casspi's groupies at summer league) and broke down his sneaker season so far as of a month ago. This time, we take a different route and bring to you news of what our little all-star Jrue Holiday will be sporting during the 2013 All-Star Game.

Jrue's an Adidas guy through and through. More often than not, you'll see our point guard leading the Sixers' offense in a pair of Crazy Lights.

While Adidas isn't the king of the sneaker world, they still represent two major NBA superstars in Derrick Rose and Dwight Howard. With Rose out of commission for the All-Star game, Jrue will be the lone Eastern Conference guard supporting the three stripes.

And what does the popular Korn song have in store for Jrue? A never before worn All-Star edition of the Crazy Fasts, of course. 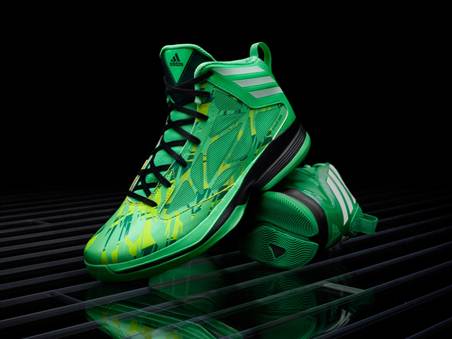 I'm admittedly not a huge Adidas guy. The only pairs I own of the brand are some old-school blue high-tops, an obnoxiously shiny pair of purple high-tops, and a red/white/blue colorway of the Kobe Crazy 8's. However, I can confirm that they make an excellent basketball shoe.

The All-Star edition of the Crazy Fasts has a similar look to one of the KD V iD options, which does well for itself. Joining Jrue in wearing these during the game will be that pretty damn okay guy from San Antonio. I think his name is Tim Duncan.

The All-Star edition of the Adidas Crazy Fast will hit retailers February 1st. Will you be coping a fresh pair? They're certainly on my radar.