In this edition of the Sunday Morning Shootaround, Spencer Hawes rides a Segway, Evan Turner states the obvious, and Kwame Brown shows us one of his hidden talents.

Share All sharing options for: 76ers Sunday Morning Shootaround: The Just Because Edition 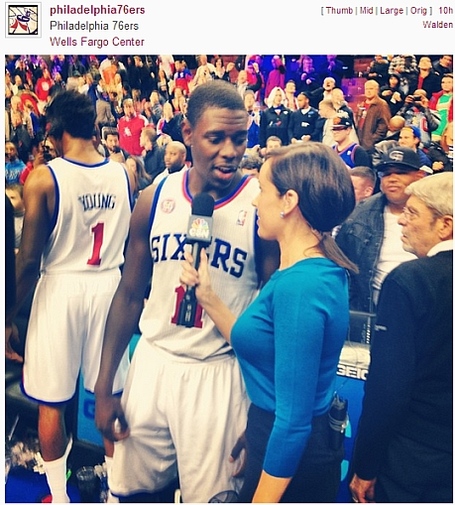 There will be a time in the future when there will be no inappropriate replies to a picture of a basketball player talking to a female sideline reporter. But until then, we will continue to post pictures and HEAVILY EDITED comments like these from the official Philadelphia 76ers Instagram feed - it makes our job a whole lot easier:

Man... the Sixers' disappointing season has even gotten to team CEO/part owner/cheerleader Adam Aron (aka HE WHO ALWAYS SHINES A POSITIVE LIGHT, EVEN IN A TUNNEL OF DARKNESS).

Buck up, lil' Bronco - there's plenty of time left to make a run. Every video of Andrew Bynum knocking down jumpers over Manti Te'o's girlfriend is a joy to watch, and once he comes back, who knows how good this team can be. Dorell Wright can't shoot 37 percent for an entire season (can he?), Spencer Hawes may thrive in the starting lineup, and Kwame Brown may yet regain the form that he had back in 2007. Or not.

Regardless, Boston is only two games ahead of the Sixers in the Eastern Conference standings, and as Kevin Garnett taught us, anything is possible... 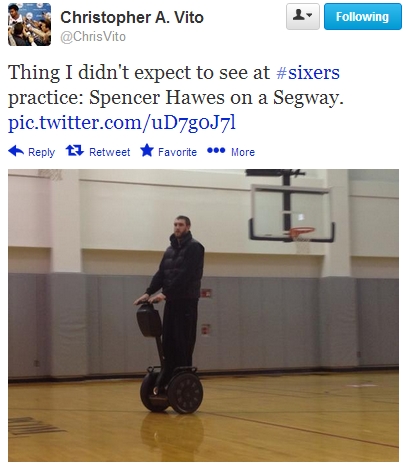 It's not quite as good as Javale McGee speeding around the Nuggets' locker room, but it'll do. For now.

Shout out to Cap'n Obvious Evan Turner as he tweeted during the Presidential Inauguration on Monday. Here are some other deep thoughts from "The Villain": 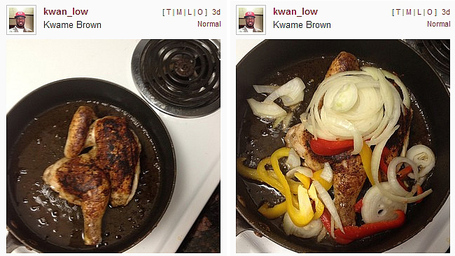 This is probably the greatest Kwame Brown-related development of the season. I mean, he's only played a little over 15 minutes since New Year's Day, and he hasn't exactly been Nik Vucevic when he has been out on the court. If we're lucky, kwan_low will pick up that $3 million player option next year - not sure how we can make that playoff push without him.

Anyway, here are two pictures from Kwame's kitchen, a place where he claims that he "can get down on that stove an grill." The picture on the right is what he calls the "finish product" even though all he did was cut up some onions and peppers (and didn't even take the time to cook them down a bit before taking the second picture). Kwame Brown: Giving you the opposite of maximum effort both on and off the court since 2001.

(Tell me you wouldn't want to see a Kwame Brown/Paula Deen cooking show, though. "In The Kitchen With Kwam" would be a ratings bonanza.)