In this edition of the Sunday Morning Shootaround, Thaddeus Young can't get a re-up on his Girl Scout cookies, Jrue Holiday makes friends at the mall, and Andrew Bynum's knees didn't disintegrate.

This scene is playing out all across America: For some reason, there seems to be fewer people selling Girl Scout cookies this year. There used to be a Avon Barksdale-like network of connects with burners that were available at all times to satisfy your Samoas fix ("We got that yellow box!"). Now, it's nearly impossible to get a re-up on the Thin Mints unless you go to a Hamsterdam/Super Wal-Mart (where the Scouts and their mothers attack you going into AND leaving the store).

In the interests of avoiding an intense debate between LB commenters, I won't rank said Girl Scout cookies. I am curious, however, as to what your favorite variety is (Tagalongs FTW). 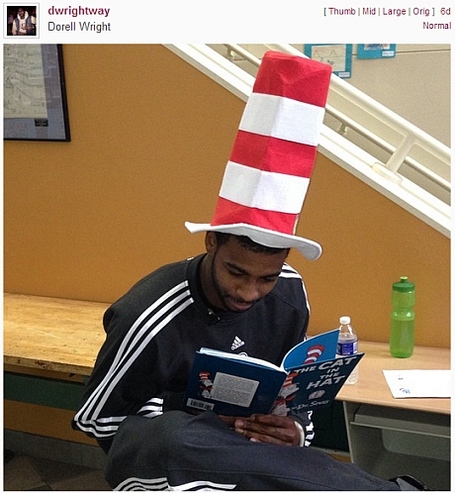 Dorell Wright read to a group of 250 elementary school students at the Sixers' annual Read To Achieve event last week. As you can tell by Wright's headwear, the book choice du jour was Dr. Seuss' "The Cat In The Hat." Fortunately, the reading wasn't "How The Grinch Stole Christmas!" or else Wright might have shown up wearing something like this.

Dr. Seuss is the NBA's go-to author for these type of deals: For starters, "The Cat In The Hat" is a bit lighter fare than "The Hunger Games." Even more importantly, everyone can knock out a Seuss book in 15 minutes or less. Unless, of course, you happen to be LeBron James, who stumbled through "Oh, the Places You'll Go" while back in Cleveland.

And for you newly-minted parents out there looking for something to throw on your Kindle that will appease your young children, here is the definitive power ranking of Dr. Seuss books:

This is how you know that Jrue Holiday gets it. For whatever reason, he actively invited people to seek him out at the King of Prussia Mall. I wonder just how far that invitation actually went, though. Does that mean you can shake his hand and take a picture with Holiday if you run into him in the As Seen on TV store, or are you free to follow him around the whole mall as he makes his way from Aeropostale to the Yankee Candle Company? If you cross paths at Auntie Anne, is he required to buy you one of those delicious, buttery pretzels?

Spencer Hawes knows better than to tweet his location whenever he's outside of the house - the reception he would get from fans would be TOTALLY DIFFERENT than the one Holiday receives. I'm sure Hawes is aware of this, and he appears to be taking the proper precautions. 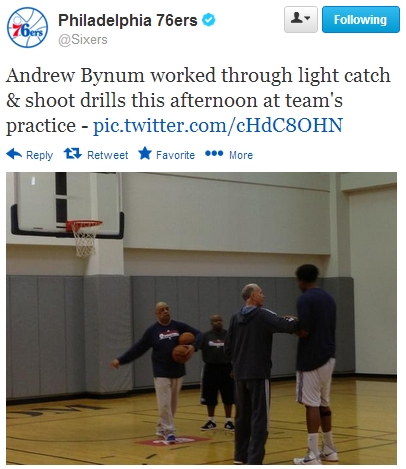 This week, we were treated to visual evidence of Andrew Bynum practicing and not having either of his legs fall off. Friend of LB Tom Moore even posted video of Bynum taking 15-foot jumpers while displaying a Big Baby Davis-esque vertical leap.

Upon seeing this, our very own Brandon Lee openly wept, and Dave Rueter celebrated in ways that can (and should) not be properly described on this family-friendly blog.

Other than the Manti "Catfish" Te'o saga, this is the greatest story so far this year. 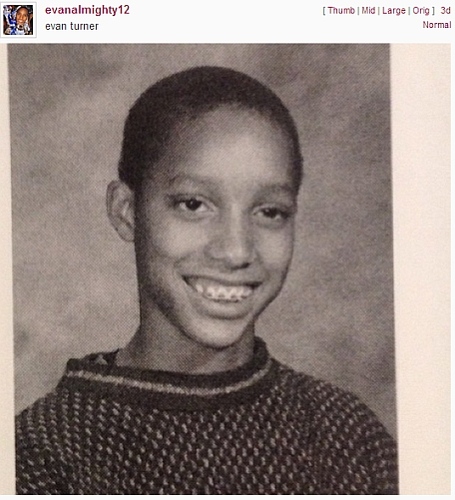 Above is a picture of Evan Turner from 8th grade. Below are Webstagram comments from hating dudes, hating women and hating ass kids. Enjoy: 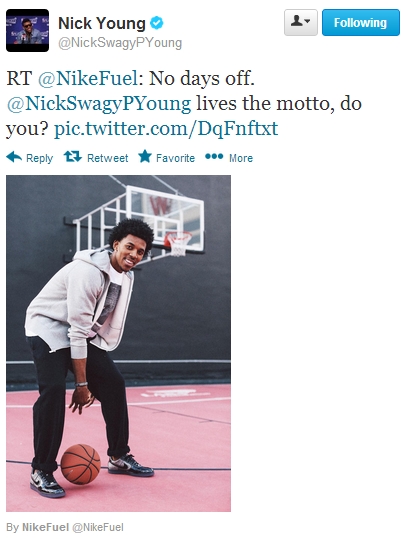 In the picture above, Nick Young is sporting the NikeFuel band - one of the latest fads in fitness today. In short, the band tracks a person's physical activity over the course of a day and translates it into a NikeFuel rating (sort of like a pedometer that is good for more than just walking).

It's a good thing that Young just received his band this past week - if he had tracked his NikeFuel for that Houston game on Jan. 12, it would have come back with a big, fat ZERO. Like a fresh out-of-the-box ZERO.

Love you, Swaggy. Please stay out of Doug's doghouse - Sixers' games truly aren't the same without you.