Nick Young: What to do with His Swagness

With Swaggy P getting his first DNP-CD of the season against the Rockets, the clock may be ticking on a move.

Share All sharing options for: Nick Young: What to do with His Swagness

I was promised a year. In their offseason makeover, the Sixers brought in Nick Young on a friendly $6M contract for the 2013 season and we were all promised one year of unmitigated Swag. But after Doug Collins moved the Ambassador of Swag into his Doghouse (pictured below), signs seem to be pointing towards moving him even if the rumor mill hasn't started churning that gossip butter yet.

With James Harden, Jeremy Lin, Chandler Parsons, and the most exciting offense in the NBA coming to town, Doug decided to roll with Damien Wilkins and Royal Ivey for their defense instead of Young. While Royal is pretty unbearable to watch on the court, Wilkins hasn't played poorly. Where Nick settles for leaning 20-footers, Wilkins goes at the rim with Hunchback of Notre Dame-like abandon, and he's not always unsuccessful. Then there's obviously the defense.

While it may have worked in the Houston game, this team needs Nick on the court more often than not. They're painful to watch at times because of how slow they are, and nothing brings entertainment value like Swaggy P during a team-wide dry spell. But because he finds himself in the Doughouse (TM-ARWL), I bet they move his expiring contract for a veteran big before the February 21st trade deadline. 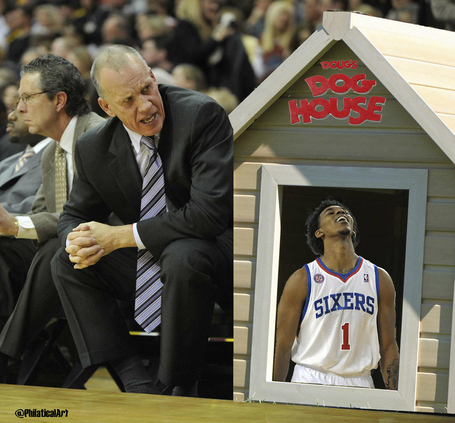 I'm not sure what kind of package the Sixers could pull for Nick on his own, though it's probably going to involve Nazr Mohammed coming back to Philadelphia. It's clear they like Dorell Wright better now that he's shooting with more consistency. Jason Richardson wakes up about once every eight games and Doug likes him for his veteran-ness, so he won't be moved. They'll probably look to nab another rotation big man for him, though I'd argue backup point guard is a less stopgappy need.

The problem is that (*CUE DEATH STAR MUSIC*) once Andrew Bynum gets back, they'll need all the shooters around him they can get. Nick's pretty excellent in the catch-and-shoot, and moving him for Primoz Brezec Version 17 would be pretty damn shortsighted. Though with Collins pulling his hair out over every other roster member, he may just want to get somebody out of here.

Nick's a special breed. He may be my favorite player-person of all time. I marvel at everything he does. But like any flamingo, he has to spread his wings and fly (I don't know if flamingos fly or have wings), so if he has to go to another team to do it... I suppose it has to be done.

Let's treasure Les Swagerables while we still can.