There is much rejoicing in the city of Philadelphia as the Sixers have won a professional basketball game.

If a team wins its first game in 11 days, but everyone was watching football when it happened, did it really count?

The answer, of course, is yes: While most of America was flipping back-and-forth between two thrilling NFL playoff games, the Philadelphia 76ers (16-22) did indeed break their five-game losing streak with a 107-100 victory over the Houston Rockets (21-17).

The Sixers' offense was a little out of sync early on, and the Rockets grabbed a 20-9 lead less than seven minutes into the game. Thanks to a few drives to the basket that resulted in easy shots and corner 3s, the Sixers went on an 18-2 run and finished the first quarter with a 29-25 lead.

Evan Turner was held scoreless for the first 12 minutes, but he scored all of his 12 points in the second period as the Sixers went into intermission with a 58-50 lead (and just two turnovers). The 58 points were the most that Philadelphia had scored in the first half in any game all season.

Houston actually played fairly well early on: The Rockets are fantastic at moving without the ball, and their insistence on attacking the basket in the first two quarters kept them in the game.

The Sixers would enjoy a double-digit lead early in the third period and again in the fourth, but a 17-7 run by Houston narrowed the score to 96-93 with 6:11 in the game.

Inexplicably, the Rockets started to panic at that point: Their next eight shots from the field were three-pointers (all of which were missed, by the way), and the 76ers were able to put the game away in the closing minutes.

What did we learn tonight? Well, it's clear that Jrue Holiday (30 points, nine assists, six rebounds) belongs in the All-Star Game. Houston point guards Jeremy Lin (seven points, 2-for-13 shooting) and Toney Douglas (1-for-6 shooting, two points) were completely outclassed on both ends of the floor.

And as kpow316 pointed out in the postgame reaction thread, players today who are named Holiday/Holliday and wear No. 11 had pretty decent games. Only Jrue picked up a win, however.

We learned that James Harden is going to do James Harden things (29 points, nine rebounds, six assists), and there isn't much that you can do to stop him. The Rockets' star has now scored 20 points or more in each of his team's last 20 games.

We also found out that Doug Collins is not afraid to do whatever it takes to get a win. Knowing that he needed competent wing defenders to match up against the Rockets' backcourt, Collins gave Damien Wilkins, Dorell Wright and Royal Ivey all of the reserve minutes at the two guard spots tonight. Nick Young and Maalik Wayns got as much time as everyone reading this recap. The debut of Swaggy P's new hairstyle will have to wait.

Finally, we learned that when the Sixers don't settle for jump shots, good things happen (although many of us already realized this). The following two charts illustrate this point - the first is the team's shot distribution against the Rockets tonight, while the second is their shot performance: 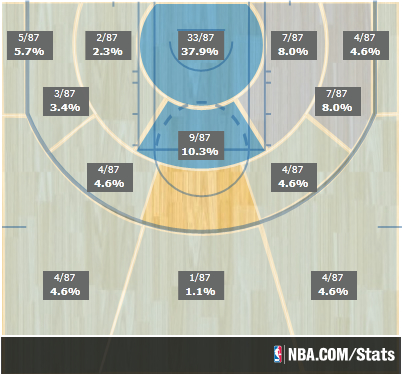 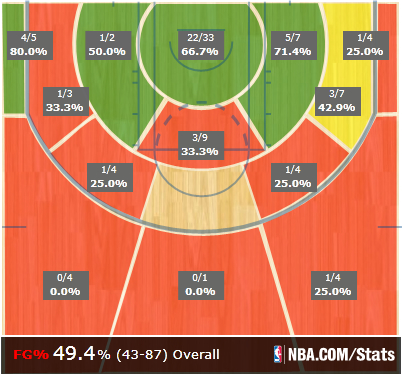 Oh... and we also learned that Jason Richardson (16 points) has a pulse.