NBA Draft 2013: What to Expect from Nerlens Noel and his Flat Top

What I wouldn't give to grow a flat top...

Share All sharing options for: NBA Draft 2013: What to Expect from Nerlens Noel and his Flat Top

Popular opinion says the Sixers came away with the best player in the draft in Nerlens Noel. Just because he wasn't drafted first (or 2nd or 3rd or 4th or 5th) doesn't take away from the months and months of scouting reports and big boards that had Nerlens at the top of the mountain. He's nursing a torn ACL (watch the video of that here), but he's expected to make a full recovery and should be on the court by Christmas.

That's all pretty thrilling stuff. But I need to pump the breaks on all these big picture pieces we've got (namely some excellent work from Derek and Rich and an In Memorium Jrue Holiday tearjerker from Baumann) to actually discuss the players the Sixers drafted on Thursday night. I needed to go back to the scouting reports for Nerlens because, honestly, I didn't pay much attention to them the first time around -- who would've thought he'd be a Sixer? Oh Hinkiepants. You slippery pickle.

There's a lot of variance in what people are expecting from Nerlens this season and beyond. We know he's going to block shots and rebound and dunk balls into hoops and have the coolest hair. But can he turn himself into something more? Let's start with the less optimistic view, this from Jonathan Tjarks of SB Nation (who, like me, had Anthony Bennett at the top of his big board): 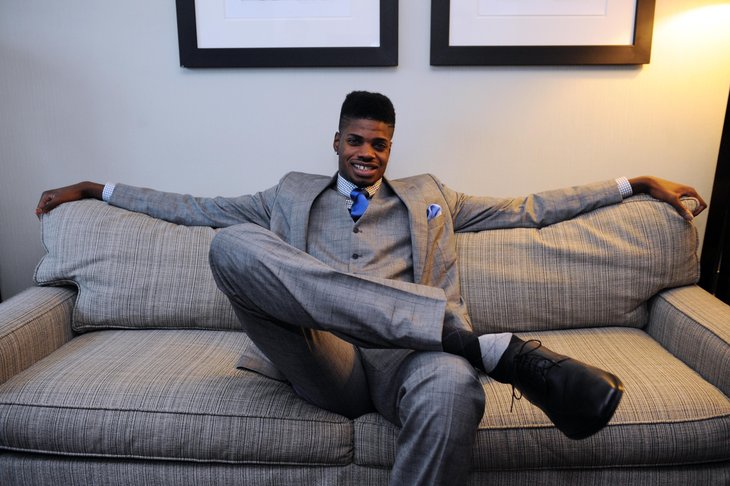 Draft grades are pointless. Except when almost everyone is giving you an A!

He measured at 6'11 and 206 with a 7'4 wingspan at the NBA Draft combine, which is essentially Brandan Wright's frame. A 19-year-old will certainly be able to put on some weight, but his narrow shoulders and wiry frame mean he'll always be giving up size to some of the NBA's bigger centers.

That would be less of an issue if he could drag them out of the paint and use his lateral quickness to his advantage, but he can't. Any comparison to Anthony Davis, his predecessor at Kentucky, is a non-starter. Noel doesn't have nearly the offensive skill, touch or feel for the game of the Unibrow, who played mostly as a power forward as a rookie for the New Orleans Hornets.

At the next level, Noel's relatively high center of gravity will make establishing deep post position difficult. When he's pushed too far from the basket, he's close to useless offensively, although he did do a decent job as a passer out of the high post this season.

It's definitely a stretch to think of a guy like Larry Sanders as a franchise big man right now. Noel is already stronger, younger, more athletic, and better with the ball in his hands, but the slight frame and unrefined offensive game point to Sanders more than somebody like Kevin Garnett or Joakim Noah, who came into the league with a somewhat similar build.

SBN's Kentucky Wildcat blog -- A Sea Of Blue -- is higher on NerNo, which I'm sure is a nickname I just made up that will stick forever.

Noel quickly became a force on defense, and became known not just for his athleticism and defensive ability, but for his heart. Noel was the player last year who gave 100% from tip to horn, and his passion and heart quickly endeared him to the Wildcats faithful.

Noel is a really good person who loves helping out not just his teammates, but his community. He took a 7-year old leukemia patient, Kelly Mellon, with him to the Kentucky Derby festivities, and walked the red carpet with him. Noel is a young man with tremendous character, and a great teammate that will benefit any team he plays for.

Noel's good hands are known, but his hands are also incredibly quick. Noel led the Wildcats in steals last year, and had an unheard-of combination of blocks and steals. Very few big men steal the ball well, but Noel steals the ball well for any player in any position. If a big man exposes the ball in the post, Noel is quick enough to poke it lose without fouling. His ability to create loose balls and quickness when it comes free is more than just rare.

Basketball, as we've heard again and again from that commercial, is about buckets. Nerlens isn't going to get you that many. He may never score more than 15 points per game. From a projected #1 pick, that's pretty low. Maybe that's why teams shied away from him. Or maybe it was the injury. Or maybe teams have terrible taste in immaculate hair game.

The coolest thing about Noel is that, barring his ACL turning into a pretzel rod, he has almost zero bust potential. He is just so good at weakside defense that even if he never gets better at any other element of his game, he'll still make a positive impact on the court. He'll never turn into Nick Young and start chucking the ball up on the offensive end. Worst case scenario is he disappears on that side of the ball save for a few alley-oops. Really, really high ceiling here.

Looking forward to hearing what Sam Hinkie says about him once the league approves the trade (in like two weeks, probably -- guh). It'll be interesting to hear about the style he envisions this team will play this year and, more importantly, beyond.

I am sure of a few other things though.

1. In today's NBA, you need a guy to protect the rim. The Sixers may have gotten one of the top three rim protectors in the league right here. It will be constantly delightful watching Noel swat basketballs away from the rim 3-4 times a night. And as we saw from Sanders in Milwaukee, it's not just about blocking shots -- it's altering them. Defense rocks.

2. The Sixers will not be running an offense through the low post. Sure it'd be nice to get some contributions from Noel with a developing back-to-the-basket game when they're in a half-court set, but they're not counting on that down the road. They're going to spread the floor, attack the basket, and be faster and more athletic than everybody else. Nerlens won't be asked to do too much on offense aside from THIS and THIS and THIS and THIS.

3. It's going to be really, really fun to watch Nerlens Noel be awesome. Remember what fun was like, guys?