The Future of Liberty Ballers and SB Nation

Share All sharing options for: The Future of Liberty Ballers and SB Nation

A long time ago in a blogophere far, far away...

It is a period of mediocre basketball. Willie Green, in the Sixers starting lineup, has managed to remain a starter despite being Willie Green. During the era, Andre Iguodala managed to turn the entire city of Philadelphia against him, because of his jump shot, which aesthetically resembles a makeout session between Rosie O'Donnell and Gheorghe Mureșan. Cheered on by the likes of Hip Hop and LeQuan Glover, the Sixers put on a clinic for being a mediocre franchise, only Andrew Bynum can restore basketball relevance in the City of Brotherly Love.

In June of 2008, I started a Sixers blog. It averaged two visitors a day – my mom and I. A little over four years later, I write for and manage the largest Philadelphia 76ers blog on the internet. I've been privileged enough to attend NBA events as "media", participate in conference calls with members of the Sixers front office, have my articles appear on ESPN and Sports Illustrated, write excerpts for books, exchange texts with a player on the Sixers roster, and share my Sixers thoughts and opinions with a huge audience.

None of that would be possible without SB Nation.

When SB Nation brought me on board in 2008, it was just a bunch of guys blogging from their mother's basement. Now, it's a legitimate company. Notable contributors from ESPN are fleeing the mothership, to take their talents to SB Nation. And, a big-time celebrity, Ashton Kutcher, has gone out of his way to attach his name to the company.

The company is only eight years old, and hasn't even scratched the surface of their potential in this "new media" industry. With that said, the company plans on making a dynamic and drastic change to the platform and network, in the very near future.

After the jump, you'll find a statement from the founder of SB Nation himself, Tyler Bleszinski. But, before you make that jump, here's a sneak peak at the new Liberty Ballers logo. 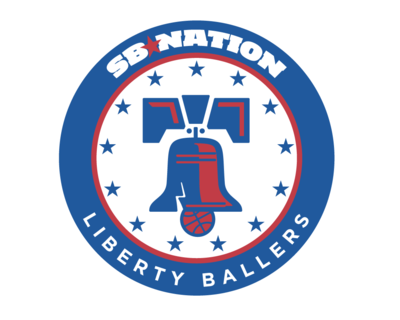 "It's with great pleasure that I unveil the first step in the next evolution of Liberty Ballers. In the next month SB Nation will be undergoing a dramatic upgrade to our platform and our editorial process. There will be much more detail to come but for now, the new logo below is just a first taste of what is coming for Liberty Ballers.

This is a small, but important sample of what is coming when our network undergoes its most exciting and radical transformation in the eight-year history of the company. A new visual identity here and across the network is only one step we are taking to unite our network of sites. United through individuality is the underlying theme of this project. You'll notice that our team colors and the unique spirit of our individual community is maintained while making it clear to sports fans that each site is a part of the larger SB Nation network. We want everyone to know that they can find the same type of great writing, video and conversation that we offer here on all of our 300 plus sites. You can browse through all the new logos on a special page we put together at sbnation.com/united.

Our commitment to passionately follow our sports will never end. It's what makes SB Nation a special place and that will only be enhanced by these new changes. In the meantime we're setting up additions to our store so you can be sporting the latest and greatest before it even launches. Welcome to our future."