Evan Turner and Friends at the Phillies Game

They actually played better than the Phils.

Share All sharing options for: Evan Turner and Friends at the Phillies Game

The offseason, everybody! With the Phillies season coming to a bleak end, the Eagles playing terrible football, and the Flyers signing somewhere in Russia, the Sixers are all we have left. Thankfully this is a Sixers blog, so you at least marginally care what they're up to. We know Andrew Bynum couldn't throw out the first pitch, but thanks to Evan Turner's poor tagging in his Twitter account, we know a bunch of Sixers were at the Phillies game!

Based on the picture above, it looks like we've got (right to left) Lavoy Allen, Thaddeus Young, Sheep Wayns, Spencer Hawes, Evan Turner, Arnett Moultrie, and Sixers Orlando Summer League Human from Dayton, Devin Searcy AKA The Queen Regent. Since all of these people read Liberty Ballers regularly, I'm going to address them individually below.

Sheep: It looks like you have penguins on your shirt. That's cool. Not sure what your back foot is doing though.

Spencer: It looks like you're a dad on vacation. Just get one of those floppy straw hats and you're golden. I also like how you're segregated from the rest of the group.

Evan: OSU shirt, bro? Really? I know you went there and all, but can't you at least regret it a little bit? Also, what are you concealing in your pocket?

Arnett: At least Lavoy was mean-muggin'. Give some indication that you're breathing.

Queen Regent: It's extremely fitting that you're sitting down. It sort of looks like you're the little kid at a Make-A-Wish event. Are those presents in your lap? Who got them for you? Does your presence at the Phils game mean you're going to get a camp invite? I hope so, you have the best smile out of the group and your Queen Regent nickname is my favorite. If you don't watch Game of Thrones, you probably should. Anyway I hope you had a good time, Devin. Sorry the Phils lost. Talk soon.

Oh and here's a picture courtesy of beyondthebuzzer.com of a high-hatted Evan with Sheep and a girl who looks like every girl from the Delaware Valley. Also that old guy in the background trying to sneak a few mustard packets into his back pocket. 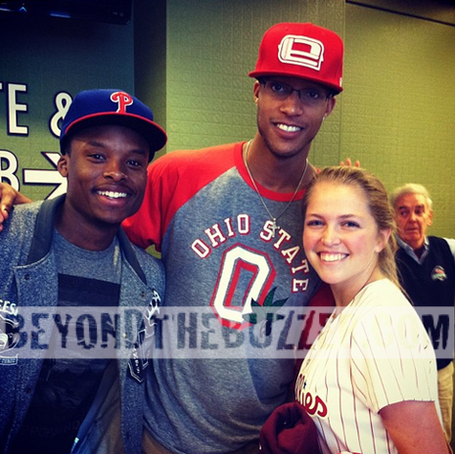 I really can't get over how Spence looks though.